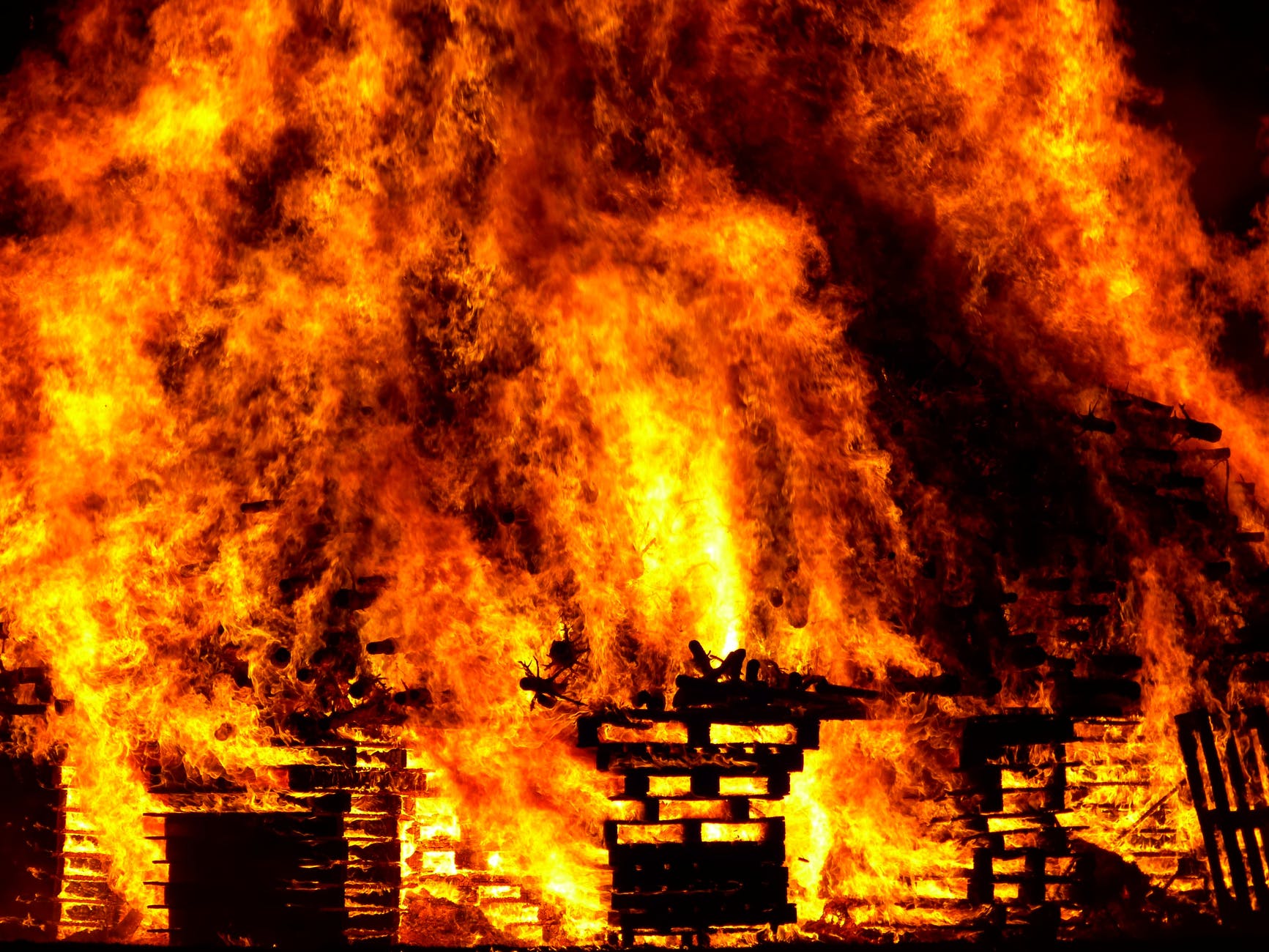 “I saw in heaven another great and marvelous sign: seven angels with the seven last plagues—last, because with them God’s wrath is completed.”  Revelation 15:1

At 7 in the morning the rec path along San Pablo Bay can be a busy place; hikers, dog walkers, runners and an occasional skater. Cyclists wiz by, more often than not catching pedestrians by surprise.

This morning the trail was free of cyclists. In fact it was nearly free of humanity. There was one couple walking unmasked and a woman struggling to control her overly aggressive dog that was looking to have my Lexi for breakfast. Standing at the shore a solitary man fishing, silhouetted against an ashen horizon. He was standing 50 meters or so from the sewage treatment plant, not a place I would pick to fish but then I wouldn’t fish anywhere in San Pablo Bay and would certainly not eat anything from the bay.

It’s another dreary depressing day today. Smoke from the many fires scorching California has cloaked the sky and choked the air. It’s slightly better today. The rising sun still had that surreal dark orange color to it. Yesterday the smoke mixed with fog created a curtain that had visibility down to about a mile at best. This wasn’t the usual Bay Area fog. Those are gray days when you know the sun will burn through by late morning; the morning fog that Tony Bennett crooned about.

The last two days were clenched in air that was thick with a tobacco colored tint. To even call it air is charitable. It was a malevolent thing, a living beast, shrouding trees that you knew were less than a mile distant. According to the weatherman the fog is pushing down some of the ash which is further staining the air. Everything is covered with a thin sheet of ash; my truck, the garden furniture, plants. The pool is splotched with clumps of ash. We don’t put a water bowl outside for the dogs as it quickly develops an ashen film. In fact we don’t really let the dogs out for any long period of time.

As bad as the last two days have been, they were much better than it was on Wednesday. Getting out of bed at 7 in the morning and peeking out the window felt like waking to the apocalypse or finding yourself on Mars. The entire sky was a burnt orange. Our world had taken on the hue of a Martian sky. There was no glow, there was no light, just a dull pulsing orange. Dull and dark enough that streetlights were still on at midday and people were driving with their lights on. A friend of mine told me she looked out the window and was literally terror stricken. It took her a couple of days to muster the courage to go out. She’s pining for her home in New York.

A “Martian” sky over San Francisco

If there’s any positive to be found, it’s that the smell of smoke has lessened to where it no longer chokes. A few days ago stepping outside was like putting your head in a campfire. The smell of smoke literally was clinging to clothes.

A week ago the kids were splashing in the pool beneath blue skies. Now a fog sodden smoke has chilled the air and drowned the spirit. It doesn’t seem possible that we could be any more depressed than we were in March and April when we were confined to the house but here we are, looking forlornly out the window every few minutes as if a few ticks of the clock will produce a patch of blue.

Still, those of us here in Hercules are the lucky ones. The fires that are burning the state are not remotely near us, but where they are burning, people are losing homes and lives. All this and a pandemic.

The pandemic. It’s stressed the shelters that are housing the displaced. Those who can’t find room in the shelters are moving to hotels. The coastal towns of Half Moon Bay and Pacifica have asked those not affected by fires to stay away to leave rooms available for evacuees. All this and a pandemic. You lose your job then you lose your home and all that’s precious to you.

A Roman Catholic upbringing is a hard thing to shake off even if at some point in your adult life you rejected Catholicism because, well because it just didn’t seem like a proper and upstanding club to belong to. I spurned Roman Catholicism decades ago but I have to admit that there are times when the voices of Sister Maryann and Father Burke still whisper to me in ominous tones. A Roman Catholic upbringing isn’t unlike a rash that flares up now and again. It erupts when you get that feeling that you might just have stepped over god’s line or when the world seems to be going wonky.

I’d say 2020 has been wonky. A pandemic, national unrest, riots, discord and the Western United States is on fire. I chanced upon a friend on that strangely orange day and she asked me what was up. I told her that the weather guy on TV said it was the sun struggling through fog, smoke and ash. And then I added, “Or maybe it’s because we elected Satan to the White House.”

A month into the shelter in place, when boredom and depression were spiriting any sense of normalcy I suffered an outbreak of Catholicism. If the nuns teach you nothing else, they make sure that Revelation is ground into your psyche.
“I looked, and there before me was a pale horse! Its rider was named Death, and Hades was following close behind him. They were given power over a fourth of the earth to kill by sword, famine and plague, and by the wild beasts of the earth.” ~ Revelations, Chapter six.

And so I sit here, my religious rash flaring again, looking out on another gloomy, smoke shrouded day and reflect on a world of hurt. With the Western United States ablaze the term global warming seems woefully inadequate. Maybe if we start calling it global roasting we’ll take it more seriously, even if the president terms it a hoax from China.

There’s an uprising in America for justice and fair treatment. It’s a reprise really. We’ve lived through these calls for justice and equality before and they never seemed to catch on or they just got buried in a jumbled news cycle that’s always hunting for the next trending story. Exiled to the back pages with stories about car wrecks and cats in trees. Maybe it’ll be different this time. The melanin challenged folks of my generation might actually be getting “woke.” That despite the fact that the president has deemed privilege to be Kool Aid.

“Very fine people” led by the president are trying to reprise the Confederacy and stoke fears of an impending attack on the suburbs by people of color and Antifa. “There goes the neighborhood.”

And then there’s a politicized pandemic and a president who’s told the world a lie about the of the severity since before day one.

“Beware of false prophets, who come to you in sheep’s clothing but inwardly are ravenous wolves.” Matthew 7:15
Is this the consequence of making Satan the most powerful man on Earth? I don’t really believe that, even if members of his cult think he’s a gift from God. I just know that Trump is an incredibly evil, duplicitous and dangerous man who’s making the plight of the world worse by his mere presence.  Maybe we can work towards a fresh start in November.

Are we experiencing the end of days? No, I think we’re experiencing a time of warning, an admonition, driven by God or nature or just circumstance that we need to do better. We need to treat each other and our world in a more Christian, or if you prefer a more attentive and benevolent manner. We’re hearing a klaxon, very loud and very clear telling us that there’s time to turn the end of days into a new beginning – but time’s a wastin’.

20 thoughts on “The Covid Chronicles: End of Days?”