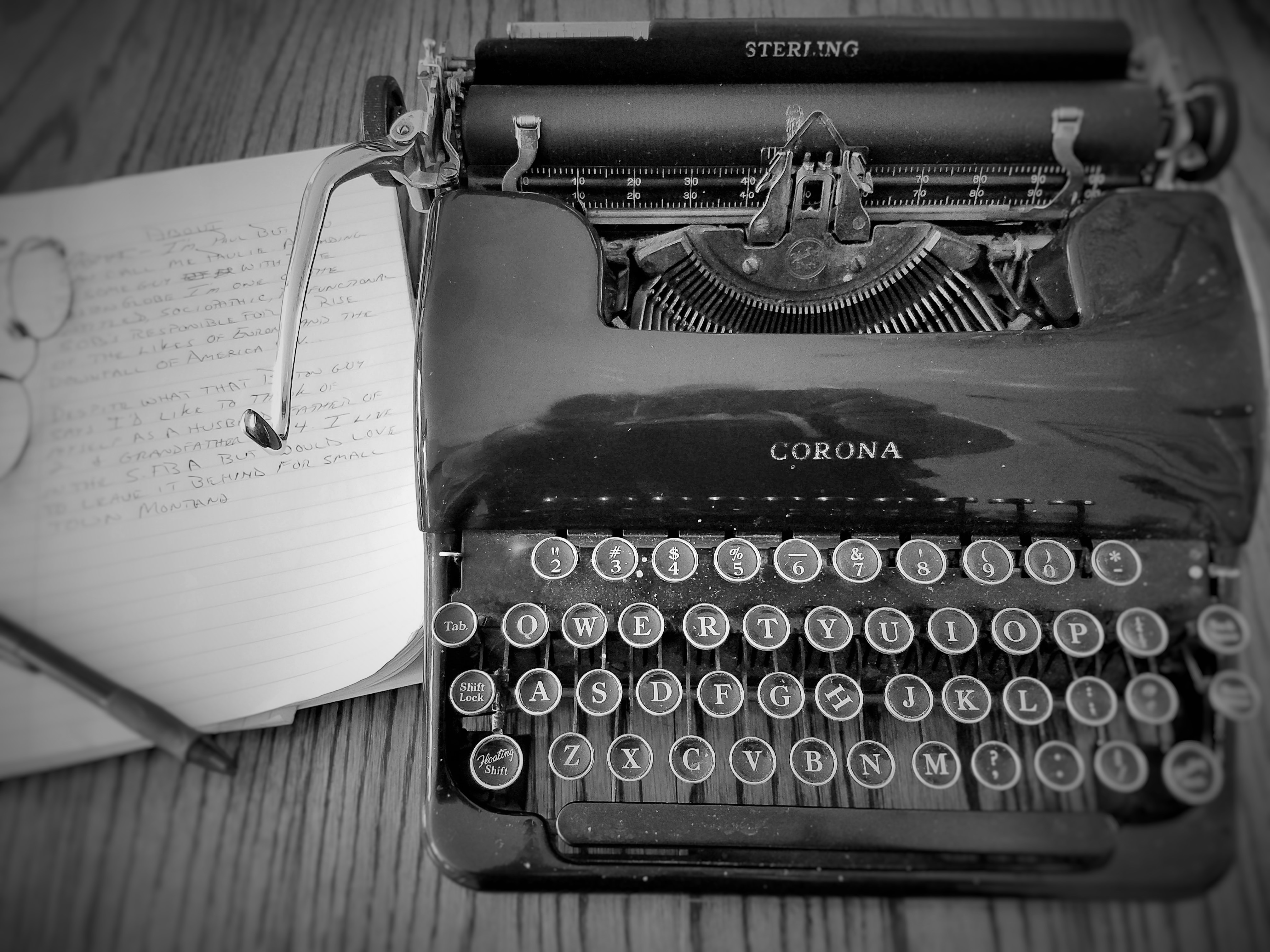 Many of us likely have a place where their life’s history is stored, oftentimes without knowing that the historical treasure even exists – until it’s uncovered. It might be an old trunk, boxes in the attic or a pile of shoeboxes. Mine was a roll top desk. This is part one of the story that was revealed over the course of sorting through the contents of that desk.

It’s gone now, that oak roll top desk. It was left to molder in that potter’s field for unwanted furniture – the county landfill. After 20 years it met an inglorious end; no ceremony, no final words. Well, maybe there were some last words but they were only testimony to the indignity that fine old piece endured throughout its lifetime. Words along the lines of, “Finally got rid of that big old bastard.”

For years it sat under the bedroom window, stacked with papers, books, business cards, clothes both clean and dirty and a collection of miscellaneous stuff and junk that I never bothered to file away or throw away. It was a hoarder’s paradise. The judge and jury of the domicile, my wife, sentenced it to exile and in the end there were no witnesses for the defense. Even I, the once proud owner turned my back and dropped a dime on it. The desk had worn out its welcome.

There’s a certain dignity that an oak roll top desk demands that I just couldn’t bestow on my own. In the end that desk deserved a better owner. If desks had souls, and who says they don’t, mine would be visiting me with nightly torments like something out of a Stephen King novel. You know the ones; the title of the book is just a name; the name of the malevolent spirit like Cujo or Christine. The nightmarish tale of my old oak desk could have been Woody.

I’d always wanted one of those desks. I suppose I pictured myself sitting at that desk like some latter day Mark Twain or John Steinbeck, pipe firmly clenched between teeth, a snifter of fine brandy sitting beside my typewriter as I composed the next great American novel, as if the mere ownership of such an esteemed work space would be the secret to great writing. Never mind talent, imagination, and commitment to the art. I give myself credit for a smattering of the former. The latter two were problematic, especially that commitment thing. I was too lazy, too busy and too distracted to sit down to the task.

As for the pipe; well that would’ve only been ornamental. And the brandy? Does whiskey count? Plenty of that. From sipping Four Roses from a fancy rocks glass to a few pulls from a pint of Old Crow when things weren’t going well.

I’d waited years to get an oak roll top desk. You don’t get solid oak desks from Target or the big box stores and you certainly don’t get them at Target prices. It was a time in our lives when the kids were still young and we were up to our necks in expenses with paychecks running only knee high. A non-essential like an oak roll top desk was off the menu. Nothing to do but wait it out.

And wait it out I did, until the owner of a local furniture store decided to call it quits, sell off his merchandise at rock bottom prices and go into retirement. I went into the store with high hopes that were answered by the sight of a beautiful golden oak roll top desk tucked into the back of the store. I made an offer and the man said “Sold!”

I had my dream desk. But even dreams come with the fine print. In this case the terms were cash and carry. With the closing of his store the owner had discontinued his delivery service. Just the thought of moving that desk made my back ache.

Clearly the family sedan wasn’t going to get the job done but my friend Dave had a gigantic pickup truck, the kind that every self respecting suburban male dreams of owning, even if the only things he’ll ever haul are a couple sacks of groceries a week and a tree every Christmas. I had a truck like that once and when I showed it to my friend Rick he rubbed his chin pensively and asked me with a wry smile if it came complete with a ranch. Well no – but you never know when you might have to haul a couple sacks of groceries.

With the help of some store employees we got that behemoth onto the truck. Oak is heavy; very, very heavy. We found out just how heavy when we got that desk home. Since that big desk wasn’t accessorized with store employees Dave and I had to horse it into the house and up the stairs ourselves. Just getting it off the truck was a task in itself that required a short rest before the real work started; in the house and up the stairs. We grunted and we groaned that wooden leviathan through the front door and up the stairs while Cora winced and cursed in Filipino with words that I didn’t understand exactly but figured weren’t complimentary to either me, Dave or the desk. Our route to the bedroom was a scene of destruction and desecration. We bashed divots in the door frames, chipped the banister, gouged the sheet rock and scraped paint off the walls. Believe me when I tell you that that desk was a solid SOB. The stairs in our house have something of a sharp turn that forced us to do some twisting and turning that made the desk permanently catawampus so that a couple of the drawers never closed quite right.

Once in it’s forever home I beamed with pride and couldn’t wait to start writing. Clearly there was a New York Times bestseller residing in that desk. In the end  there was to be no bestseller. There wouldn’t even be an anthology of the worst hooey ever put on paper. I did write out a few checks though.

For 20 years that desk performed the duties of anything but a distinguished roll top desk. It played the roll of safe deposit box, cabinet, a stack of plastic bins, and a wastebasket. Oh, and laundry hamper. Can’t forget the athletic socks tucked away in a corner. You know, the ones that get a quick sniff before being pronounced good enough for another wearing, or two; maybe even three. Yeah, one of those icky guy things.

And then came the fateful day when we decided it was time to put it out of its misery and put it down. Only two tasks remained; clean it out and then move it out. Recalling the struggle of getting that thing (by this time it was relegated to thing) upstairs my first impression was that moving it out would be the more difficult task. As much as Cora wanted it gone she also didn’t want to see another depredation of the domicile. Think outside the box. Hmmm, what would Tony Soprano do? Yeah, he’d dismember the corpse before taking it to the landfill. There was nothing surgical about it. Once empty I rudely took a four pound engineers hammer to it.

Before the execution I had to go through the desk and sort through the contents. I pulled out the drawers one by one and sifted through papers, documents, ancient checks, bank statements, photographs, mementos and an accumulation of knick-knacks, gimcracks and gewgaws.

The desk had become a repository for photos, many from my dad’s collection. After he’d passed I took the photos and tossed them in a drawer to sort through later. That project went the way of the book that I was going to write, that is the drawer lay idle except for collecting more photos. Among the photos were more recent ones that I’d neglected to put in albums making the trove span generations from the 1930’s to the 1980’s.

What I’d thought would be an hour or two of making piles to keep and piles to toss, turned into days, much of that time taken up with pausing to reflect and discover. There was plenty of treasure and plenty of trash in that desk but mostly what resided in that desk was the history of family and friends, some still around and many long gone; of work, of play and of a timeline that followed the changes in the world and in the way we would all lead our lives. Hauling out the desk was the least of the task. In going through its contents I found that in that desk resided a soul.

Next up. Photographs, war, family, friends and Italy.

19 thoughts on “The Oak Desk Part I. Born and Buried”