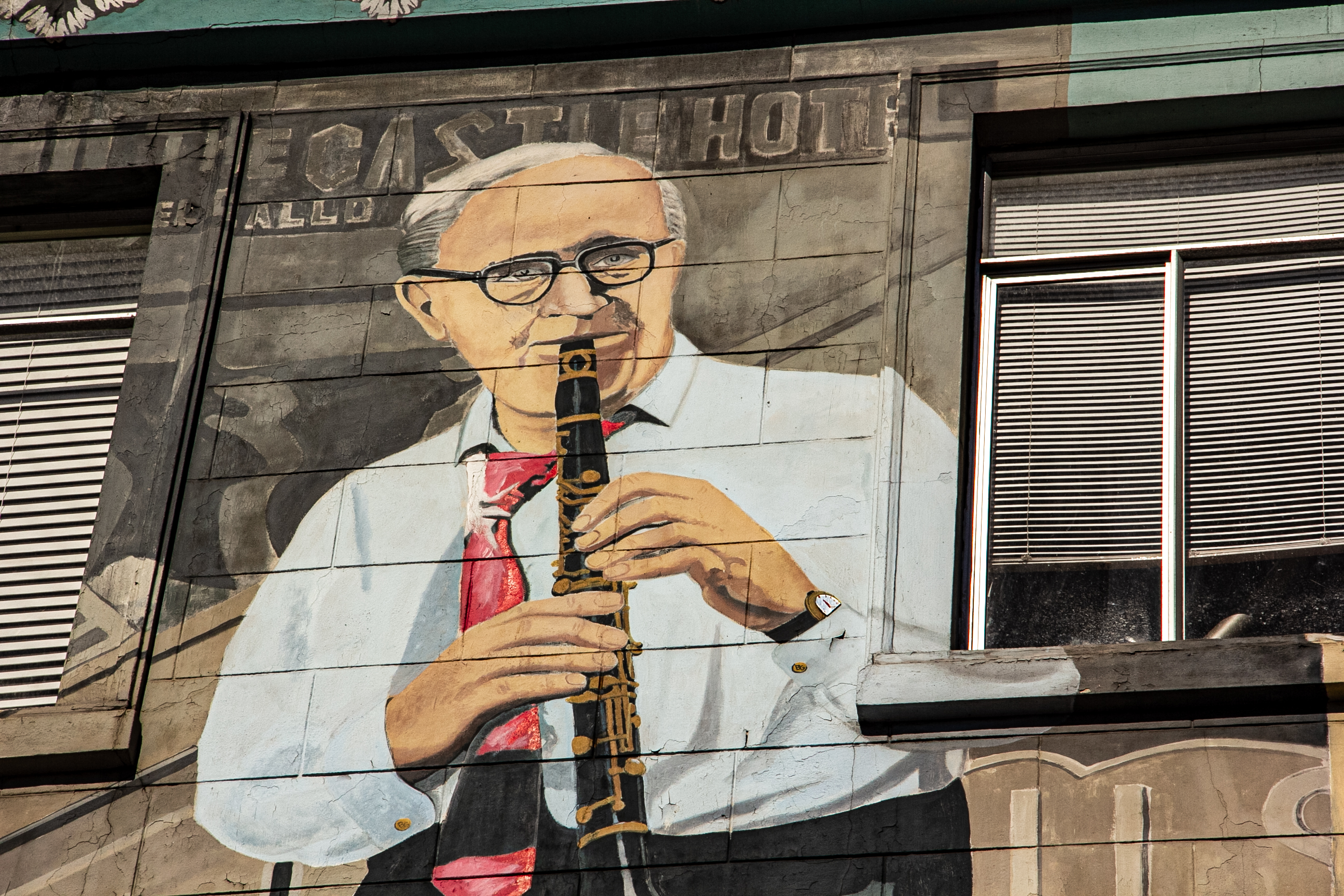 October, 1964, I’m on the cusp of my 12th birthday and President Lyndon Baines Johnson is appealing to San Francisco’s grass roots. It’s less than one month until the presidential election and I’m in a far corner of Washington Square with my parents as LBJ presents his case. Johnson hasn’t been in office for a year yet, having risen to the presidency after John F. Kennedy was assassinated in November of 1963. Now Johnson is running against Republican Barry Goldwater, trying to earn the office in his own right. By this time barring something along the lines of an Access Hollywood tape, LBJ was a shoe-in to win the election. Goldwater had not only shot himself in the foot, he’d dropped an atomic bomb on his own campaign and left it in ruins with the assertion that field commanders should have the authority to use nuclear weapons without presidential approval.

Goldwater’s perceived laissez faire attitude towards nukes led to the production of two of LBJ’s own campaign nukes. One was the slogan, “In your guts, you know he’s (Goldwater) nuts.” The other was the “daisy girl” television ad that to this day is still famous among those of us who remember it. It was, and still is, a chilling ad.

October is one of the warmest months of the year in San Francisco and if memory serves me, and these days my memory sometimes gives indifferent service, it was one of those hot afternoons.  I recently found the text of LBJ’s speech. It was the typical stump speech employing the time honored recipe; unequal measures of praise, promises and bullshit. He stroked the local politicians and other assorted grandstanders and baby-kissers, lauded San Francisco, particularly its Italian Americans and pledged peace and prosperity. After a mention of the golden rule he ended with, “…if I can have your help, if I can have your hand, if I can have your heart, if I can have your prayers, if the good Lord is willing, I will continue to try to lead this nation and this world to peace.” In the end Johnson trounced Goldwater carrying 44 states, but that peace thing, well, that didn’t quite work out.

These days it seems odd that a presidential candidate would waste time stumping in San Francisco, about as liberal a city (some still dub it as a people’s republic) as you’ll find in America. Trump and Biden will no doubt pay a short visit to the Bay Area but that’s only set aside for the swells who have the financial juice to afford the zillion dollar a plate reception at the private home of a mega-swell who’s drooling for a slice of patronage pie. But in 1964 California was a prize that was up for grabs. Johnson would win in ‘64, but for years before and after, until 1992, California was Republican territory.

Washington Square is ringed by San Francisco’s Italian heritage. On one corner you can stand in line to get a pie at Tony’s Pizza Napoletana, home of 13-time World Pizza Champion Tony Gemignani (have the Margherita pizza). What the hell if you’ve suffered the line you should just get the one pound meatball…and the mussels…and some fried dough.  A few doors down, Tony has an Italian specialty shop on Green Street where you can get food stuffs from the old country.

If a pizza isn’t to your liking go a little further up Green to Mario’s Bohemian Cigar Store for a beer and panini. On the opposite side of the park is venerable Victoria Pastry, a family owned bakery that opened in 1914. If you want to rock the Euro look go to the north side of the park and visit Goorin Brothers Hat Shop. If you have a need to feed the soul then there’s alway St. Peter and Paul’s Church.

Washington Square is the North Beach gathering place. You can often see groups sitting on the lawn having a meeting of some sort (It’s San Francisco, beware, they might be Socialists). You’ll certainly see dog walkers stopping to chat while their companions wag tails, sniff butts or chase a Frisbee.

Washington Square is a window into The City’s diversity. On any given morning, walk on the north edge of the park along Filbert Street and you’ll pass a group of Chinese ladies practicing Tai Chi. They’re speaking Cantonese in the very shadow of St Peter and Paul’s looming facade that’s inscripted with Italian praises to God’s glory. Amid the sounds of Muni busses, barking dogs and chatting friends; in the middle of this Italian enclave you’ll hear the enchanting Asian melody of an erhu. He’s an older Chinese man often seen and heard at the corner of Green and Stockton playing his classic Chinese fiddle.

It wasn’t always this way. Broadway, a few blocks south of the park was the traditional border between Chinatown and North Beach. In the 1970’s there was a gradual, yet marked, movement of Chinese residents and businesses to the north side of Broadway, creating tension between the two communities. From an outsider’s point of view that tension seems to have been relieved. At the corner of Broadway and Columbus above the New Sun Hong Kong Restaurant is a mural painted by Bill Weber that represents the melding of North Beach and Chinatown. On the Columbus side is a mural that celebrates the jazz heritage of the city and features Benny Goodman on his clarinet, Gene Krupa on drums and Teddy Wilson on piano. The Broadway side of the building which faces Chinatown is a celebration of San Francisco’s Chinese culture.

In talking about the mural Weber tells the story of a day in 1976 when he was painting a mural at Fisherman’s Wharf. A boy named Giovanni Toracca, selling cherry bombs at the tender at of 11 approached Weber and said, ‘When I grow up, I’m going to buy buildings and have you paint them,’” Years later Toracca approached Weber and commissioned him to paint the Jazz Mural on the building that Toracca had acquired at the corner of Broadway and Columbus that houses the New Hong Kong Sun Restaurant.

Today longtime residents of both Chinatown and North Beach and every other district of The City are putting fingers in a failing dike, trying to stem the flood of gentrification.

Washington Square is the hub of North Beach but St. Peter and Pauls with it’s 190 foot twin spires is the focal point. Construction began in 1913 and was completed in 1924.

It’s the afternoon of August 8th, 1984 and North Beach is alive, well it’s always alive, but when a pair of Italian warships are in port and The City is teeming with sailors the alive factor is off the charts. To add to the excitement the Los Angeles Olympic games are on and there’s a soccer semifinal game down the peninsula at Stanford Stadium between Italy and Brazil.

On this particular day I’ve taken off from work to spend some time at North Beach, to absorb the atmosphere and to sit at a sidewalk table and absorb a meatball sandwich at Molinari’s Deli and some wine at Mario’s. Later my brother in law and I head down to Stanford to join a crowd of 86,000, many of them Italian sailors and see Brazil score the final goal of the game in the 95th minute to win 2-1.

North Beach is on the edge of what was once the over the top edginess of the infamous district known as the Barbary Coast. This red-light district was a haven for pickpockets, saloons, dives, dance halls, and drug emporiums that offered cocaine, opium and morphine.
Gangs with colorful sounding names like the Hounds, later to be known as the Regulators (Made up largely of veterans of the Mexican-American War) and the Sydney Ducks (ex-cons from Australia) roamed these stomping grounds which was known as The Devil’s Acres. It was the rare night that passed without a murder.

With its many barrooms and proximity to the docks the Barbary Coast was a prime location for men to get “shanghaied,” by goons who would spike the unsuspecting victim’s drink, kidnap him and haul him to a ship to serve as forced labor.

Some of the saloons employed scantily clad women known as “pretty waiter girls” who were paid to seduce and play men for their hard earned if sometimes ill gotten money. A century later North Beach would be home to a different sort of “pretty waiter girl.”

In 1964, Carol Doda, a dancer at the Condor Club in North Beach, dropped her top and history was made. The Condor became known as the world’s first topless bar. One club led to another and soon there was a strip of strip clubs along Broadway (in an effort add a measure of savoir faire the preferred term in the industry is “gentlemen’s club).

Four years later The Condor upped the ante and went topless/bottomless or in more blunt parlance – nude. In 1972 the Supreme Court, yes THE Supreme Court, put the gavel down and upheld a ban on nude dancing that had been issued by California’s Alcoholic Beverage Control Board. It’s a rule that still stands that if you want a beer all you get is boobs but if you want the full monty you’ll have to settle for soda pop.

The Condor is located at one of THE prime corners of North Beach, at the intersection of Columbus and Broadway. For years the club’s prominent sign featured a dancing girl with blinking red light nipples that looked more like Maraschino cherries to be honest. The cherry/nipples were annoying in that every trip to North Beach required driving past the Condor and with the kids in the back seat every trip was an exercise in mortification. Not unlike watching a football game in the family room and sitting there with the fam watching a Cialis commercial starring the couple in the separate bathtubs (I always wondered about that commercial. Didn’t it ever occur to that couple that if they squeezed into the same tub that the old boy might not need the Cialis? Very strange.)

Early on when naked women were something of a novelty my parents and a few relatives from Salt Lake City, where naked women were against the law, headed out to Broadway. My recollection was that the group was unimpressed. Well, the ladies were unimpressed and if the menfolk were impressed they weren’t copping to it.

It’s in these clubs that the modern version of the pretty waiter girl can be found as between shows the young women prowl the audience and offer patrons a “VIP show” in a private room. For a price of course.

The clubs seem to be fewer in number than in the heyday of years past. It’s been some time since I’ve walked down Broadway where the barkers, seedy guys with smarmy sounding voices and who seemed to sport a permanent leer would try to lure you in with lewd come ons that didn’t do the young ladies justice. They’re just there to make a buck just like the rest of us. Hell in a lot of ways it’s a more honest, forthright occupation than many. Like Cora often says, “You do what you have to do to survive in this world.”

Below, images of North Beach.

This morning I paid a visit to North Beach, the first time I’d been to The City since March 13th. Sunday morning traffic was light and unlike the days of normal normalcy parking was plentiful. A few people sat at outdoor tables enjoying coffee and pastries but for the most part the streets and businesses just seemed to pine for people. The venerable tavern Vesuvio is shuttered (at least for the time being). I stopped at the front door.

A sign promised that they would be back while another urged determination.

One thought on “My San Francisco: North Beach. The Sequel”