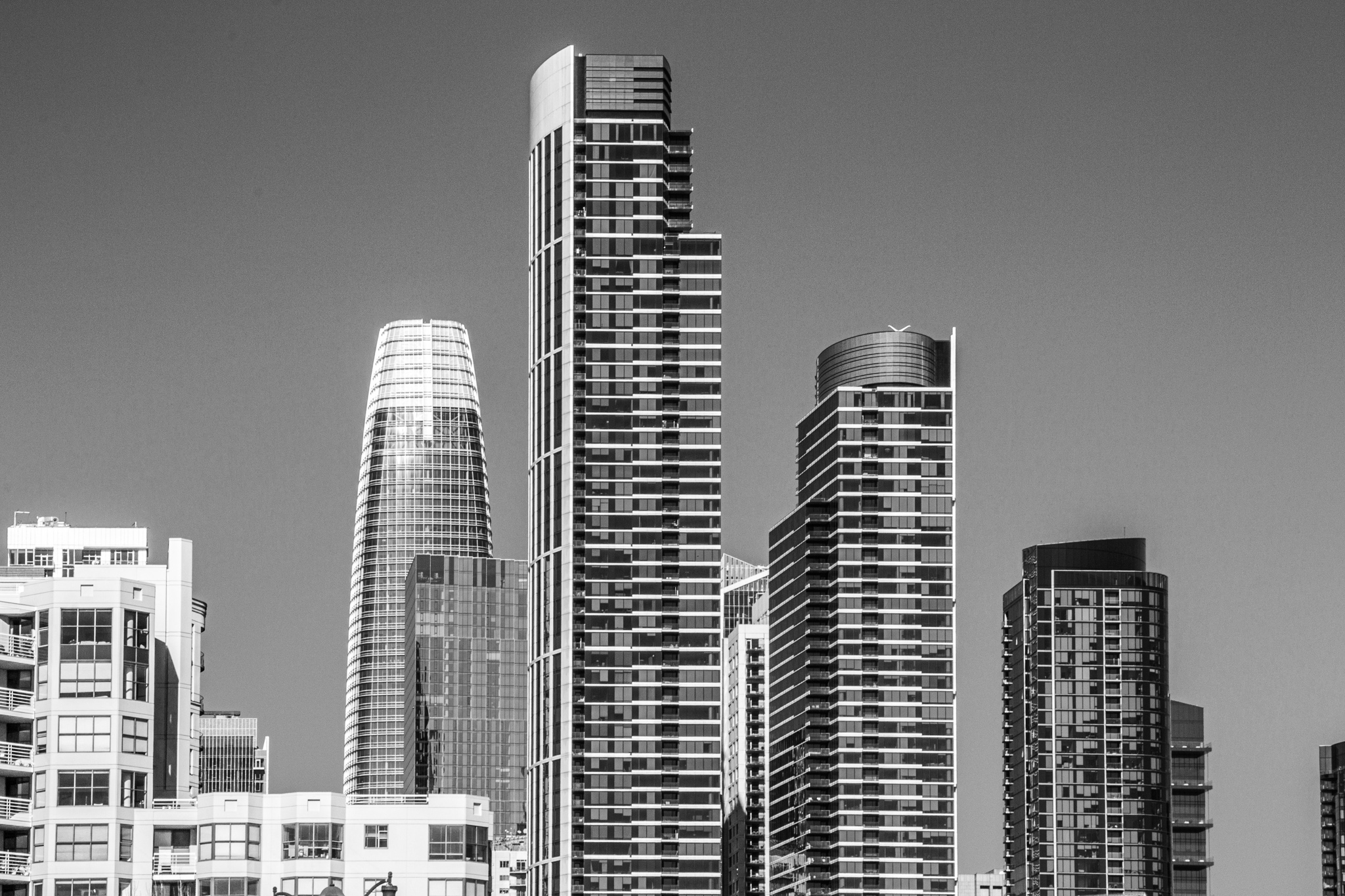 Banner photo. The Downtown skyline taken from The Embarcadero.

If you ever have the opportunity to ramble the city sidewalks (assuming you have a city that’s handy ), look around you. No, not for muggers. Okay, yeah always keep an eye out for sketchy fellow citizens, but also keep your eyes open for the varied patterns.

The city is alive with geometry; a plethora of squares, rectangles, triangles, circles and cylinders. And if precise angles don’t move you there’s plenty of the shapeless, and the precilelessly planned amorphous.

And by all means look up.

I visited the Financial District one Sunday morning, specifically on Sunday, because on a Sunday the Financial is essentially closed and as devoid of people as downtown small town America. That might be the only thing that tiny Pocahontas, Iowa and San Francisco’s Financial have in common. On a Sunday morning you can fire a cannon down the middle of the street and not hit a thing.

Forsaken streets make it all the easier to photograph the architecture without the intrusion of photo bombing humans.

Standing on a plaza between Market and Mission Streets I noticed four highrise buildings separated by three city blocks. With a little imagination you can almost see it as one building composed of four designs. (Okay, maybe a lot of imagination).

From the plaza I walked up a flight of stairs and when I looked down, the pavement looked as if it had been laid unevenly, complete with uniform folds.

The cylindrical Salesforce Tower often gets lost in a fog. At 1,070 feet, it’s the second tallest skyscraper west of the Mississippi. The view below passes through several city blocks.

Ask me what the coolest building in San Francisco is and without hesitation I’ll offer up the Sentinel Building, a flatiron style that sits at the confluence of three city districts; Chinatown, North Beach and the Financial. The photo below is of two of the ornate columns.

Built in 1907, the building was once owned by the folk music group, The Kingston Trio. The Trio turned around and sold it to some guy named Francis Ford Coppola.

Among the tenants are American Zoetrope Studio, Pixar, PBS and Skywalker Sound. On the ground floor is Café Zoetrope owned by – Signore Coppola. A step into the café is like taking a step into Europe.

The view below looks towards the corner of the tower.

The Sentinel, also known as the Columbus Tower or Coppola’s Cupola always catches my eye when I’m leaving North Beach.

The Financial is an amalgam of concrete, glass and creative design. The glass offers reflections to reflect upon as well as some interesting distortions.

In the photo below I removed the texture and much of the clarity in Lightroom for the desired effect.

I adjusted the texture and clarity on the photo below as well. The swirled panels in the windows are the blinds which are silhouetted behind frosted glass at the tops and bottoms of the windows.

Distorted by design is the Mira Tower (below), designed by Studio Gang Architects.

A condo in Mira would definitely be a conversation piece.  The price puts the lie to the old saying that “talk is cheap.”
A three bedroom/three bath, 2000 square foot unit runs $4,645,000.
If you’re looking for something more spartan, a one bedroom/one bath, 797 square foot unit is going for a mere $1,345,000 dollars.

13 thoughts on “Monthly Monochrome: The Shapes of San Francisco”