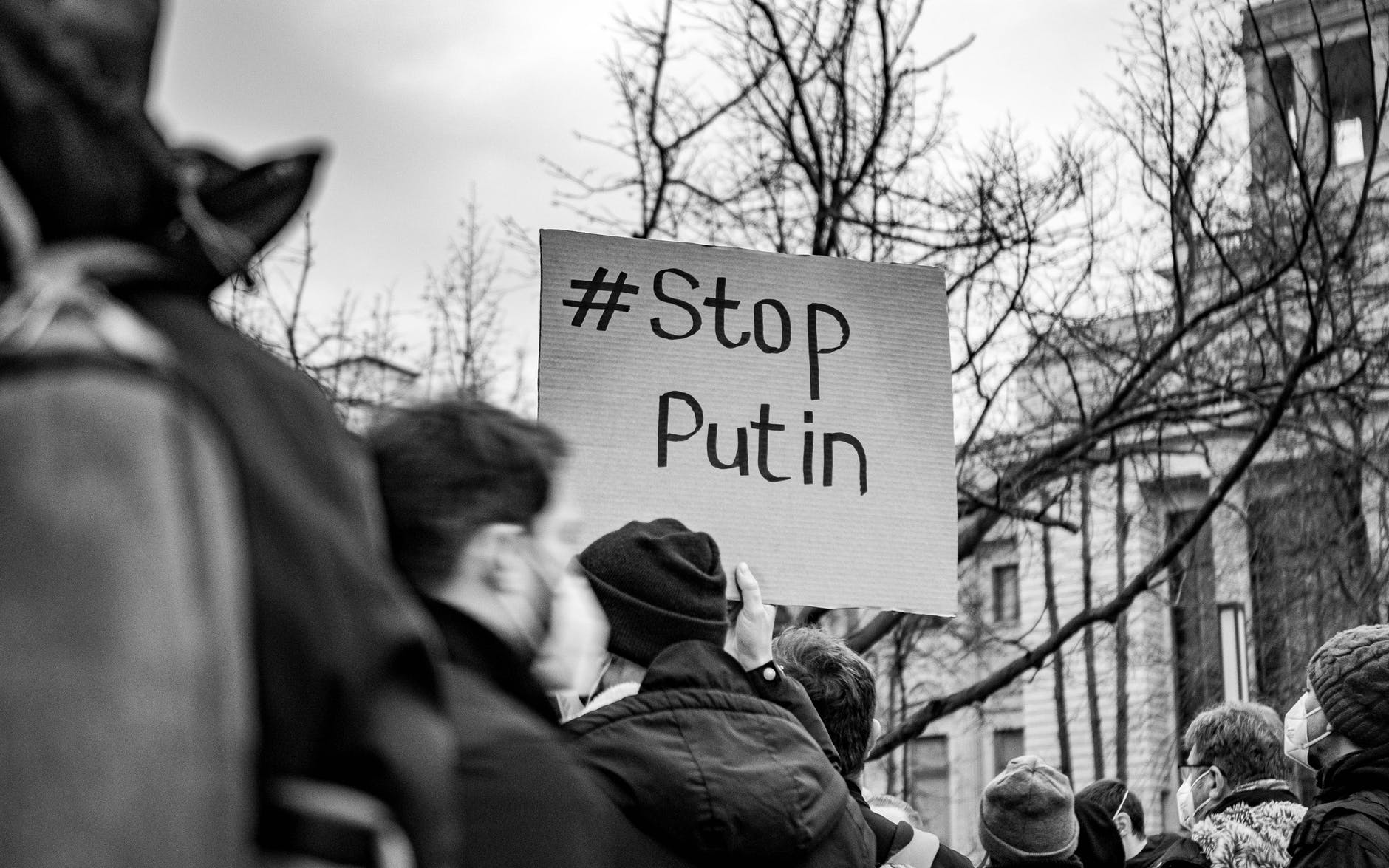 Blood and destruction shall be so in use
And dreadful objects so familiar
That mothers shall but smile when they behold
Their infants quarter’d with the hands of war;
All pity choked with custom of fell deeds:
And Caesar’s spirit, ranging for revenge,
With Ate by his side come hot from hell,
Shall in these confines with a monarch’s voice
Cry ‘Havoc,’ and let slip the dogs of war;
That this foul deed shall smell above the earth
With carrion men, groaning for burial.
~ William Shakespeare, Julius Caesar

What exactly is it that motivates a man to “let slip the dogs of war,” on an innocent nation, a country doing nothing but minding its own national business?

The injured nation possesses nothing that the attacker needs; no resources that can’t be otherwise secured, no riches in particular. The attacker doesn’t need the land for colonization, what Hitler termed  lebensraum.

But there’s a sin, one unforgivable sin perpetrated by the injured nation, a decades-long transgression conjured up in the twisted mind of a narcissistic madman; the sin of existence.

After months of amassing a huge army on his country’s border with the Ukraine, and spinning a yarn of war games and exercises, Vladimir Putin let slip his Russian Army.

Why?
It’s the question that Putin has answered only with fury and more fables, and pundits have tried to answer with theories.

Ukraine long ago took up residence in Putin’s head. The Ukrainian national anthem must be the earworm that disturbs Putin’s sleep at two o’clock every morning.

That Ukraine exists as an independent sovereign must, for decades, have been more than he could take. Putin probably looks at a map of Europe, sees all of those former Soviet republics and cries in his borscht, nostalgic for the “good old” cold war days of an intact Soviet Union.

As he sips his vodka maybe he waxes over those glory days of TU-95 bombers cruising off the coast of Alaska, nuclear submarines peeping at Boston Harbor through periscopes and the Kremlin casting its ominous shadow over the vast Soviet land mass.

When the Berlin Wall came down, Putin was a young KGB agent in Dresden, in what was at that time East Germany. The dissolution of the Soviet Union was, for Putin, a traumatic event that would stay with him and shape his life (Germany’s defeat in World War I and the subsequent Treaty of Versailles were traumatic events that shaped the life of a particular German corporal).

If Putin’s goal is to reestablish the old Soviet Union, what better place to start than the second largest country in Europe.

Images
When I was a young boy, my mother and grandmother, Nonna Maria, used to tell me stories about life in war torn Rome. During my childhood, the memory of World War II was still fresh, war veterans were in the prime of life and old, war footage was regular television fare.

We’re sixty years removed and the scenes played out on television remind me of the old newsreel films of World War II that I watched as a child, the only difference being that now it’s all in high definition, living – and dying – color.

Those old newsreels long ago kindled my boyish excitement about war, its power and its glory. Now my perspective comes from the wisdom of old age. Excitement has been replaced by sorrow for the poor people of Ukraine and disbelief that we’re watching a replay of the Europe of over eighty years ago.

I feel a mixture of sadness and amazement when I see the resolve of the Ukrainian people.

It’s hard to fathom
How is it to go about an evening getting ready for work or school or whatever the routine will be the next day, only to wake up and find out that one of the world’s largest armies is approaching and everything that was normal the night before is all amok? Imagine wondering when normal will return, or if it ever will return.

What does one do? Make love one last time in the bedroom you may never see again? Try hard to savor the tenderness, wishing those precious moments could never go away because you realize that once they’re past those moments will never return again.

Pack up what little you’re able to bring…tell the children they can only bring one small toy each…and then there’s the dog.

Do you even bother turning off the lights and locking the door?

Bombed buildings…people sifting through wreckage…charred military vehicles and other detritus of war strewn on a bridge…the couple who married on the day of the Russian invasion and then traded their wedding clothes for fatigues and AK-47s…subway stations and basements turned into makeshift bomb shelters…the Ukrainian brewery that has suspended bottling beer and now bottles gasoline to make Molotov cocktails…crowds trying to board a train, and columns on foot, all trying to make their way to safety.

How can we Americans begin to understand? Even a natural disaster pales. Certainly my San Francisco Bay Area home might get leveled by the next big earthquake. But what have I lost? A thing that can be rebuilt. The Ukrainians stand to lose their way of life, their freedom; things you can’t rebuild but only struggle to reclaim.

A divergence of faiths
Sometimes I envy those who, like my wife, can put their faith in prayer. While Russia is launching missiles at Kyiv, she and her friends and family are launching prayers to “god the father,” to soften Putin’s heart.

Pardon me for being dubious, but I keep thinking back to the Crusades, Hitler, Stalin, and Pol Pot. There was no heart softening going on then and there won’t be any as regards Putin. First there has to be a heart to soften.

If this is how “god the father” is treating his brood maybe we should report him to child protective services and turn to “god the mother.” Maybe what we really need is “god the kindly aunt who wears an apron and bakes apple pies.” The world could certainly use some apple pie love about now.

Right now I have more faith in Ukrainian patriots and Molotov cocktails.

In my darkest, and more irrational moments, I’d like to put some faith in NATO air strikes unleashing hell on the Russian columns.

Take one for the team
A few days before the invasion took place, the dinner table conversation turned to the events in Eastern Europe. “Russia is going to invade Ukraine, and China is going to invade Taiwan and I don’t care about either one,” said a family friend.

A long silence followed. I imagine my wife held her breath, hoping that I wouldn’t lose my shit.

It was a hard thing to do, but I held onto my shit and held my tongue. Swallowed the words, ‘You’d better fucking care about them. Our economic world is going to be turned upside down. But more importantly, a peace loving democratic nation is going to be attacked and in the end, Ukraine is going to be taking one for the team.’

“Taking one for the team;” it’s an old saying which the Urban Dictionary defines as “The act of someone willingly making a sacrifice for the benefit of others.”

Ukraine is “taking one for the team.”

Who’s the team? The democratic world that’s sitting back watching.

Sure the team is providing materiel and monetary aid, along with levying sanctions on Russia but what Ukraine really needs is the military help and reinforcements that will never come. Ukraine has found itself to be the frontline of democracy.

Ukraine will most certainly fall but it will also likely never fall. The Ukraine Army will at some point be defeated but the people will continue to resist. It will be Putin’s quagmire.

Ukraine will continue to take one for the team for years. The Russian Army might become the occupying army but it will find itself an army occupied, occupied with trying to quell an insurgency, tying Putin down and stymieing any notions of swallowing up any of the other former Soviet republics.

As Putin ups the ante, unleashing more brutality, I wonder how long America can stay out of the fight. It seems like this is one of those scenes in a movie when the hero is tied down and made to watch a family member tortured until the hero manages to break loose and vanquish the villain.

Seeking hope
I get up every morning, turn on the news and hope for a miracle.

Maybe that 40 mile long Russian convoy of death has turned around or been bombed into wreckage.

Maybe some general who doesn’t want to be tried for war crimes or see his army turned into fodder for snipers and the resistance has put a bullet in Putin’s brain and called the whole thing off.

But every morning the news is uplifting only for the bravery of the Ukrainian people, yet disheartening because the Russian Army relentlessly moves on. It only gets worse as Putin’s notion of being able to waltz into Ukraine becomes a fantasy that now requires a scorched earth strategy in order to succeed.

During the first days of the war, I found myself mired in sadness and depression, only managing to cheer myself up a few days later with a photo excursion to San Francisco.

But even that was disturbed.

I’m sitting outside of Royal Coffee on Clement Street, in San Francisco’s Richmond District. Less than two miles to the west is Ocean Beach and the Pacific Ocean. It’s a fair day in The City. Three men at a nearby table are talking about…the war.

One of the men brings up a fact and a theory and both of them make the blood run cold. The fact is that Putin has nukes – and plenty of them. The theory is that Putin has gone bonkers, nuttier than your Aunt Mabel’s fruitcake.

Sympathy for the devil
“Older men declare war. But it is youth that must fight and die.”
~ Herbert Hoover

I can’t muster much anger against the Russian soldiers. It’s reported that many of the soldiers are conscripts just trying to serve their two year hitch before getting on with life. They don’t have the training or the stomach for this war. There are reports of Russians surrendering or sabotaging their own vehicles in order to avoid moving forward.

I felt an overwhelming sadness reading the story of a Russian soldier whose texts to his mother were found on his phone.
“I just want to hang myself now,” he texted to his mother.
“What are you talking about? What happened?”
“Mom, I’m in Ukraine. There is a real war raging here. I am afraid. We are bombing all of the cities, together. Even targeting civilians. We were told that they would welcome us and they are falling under our armored vehicles, throwing themselves under the wheels and not allowing us to pass. They call us fascists. Mama, this is so hard.”
Moments later the soldier was dead.

The other day my wife heard a song dedicated to Ukraine and she played it over and over and over again. It had her on the verge of tears but she couldn’t stop listening, as if turning off the music and looking for some cheer would be an affront to Ukraine.

I understand the sentiment.

Sometimes you just feel the need to hurt.