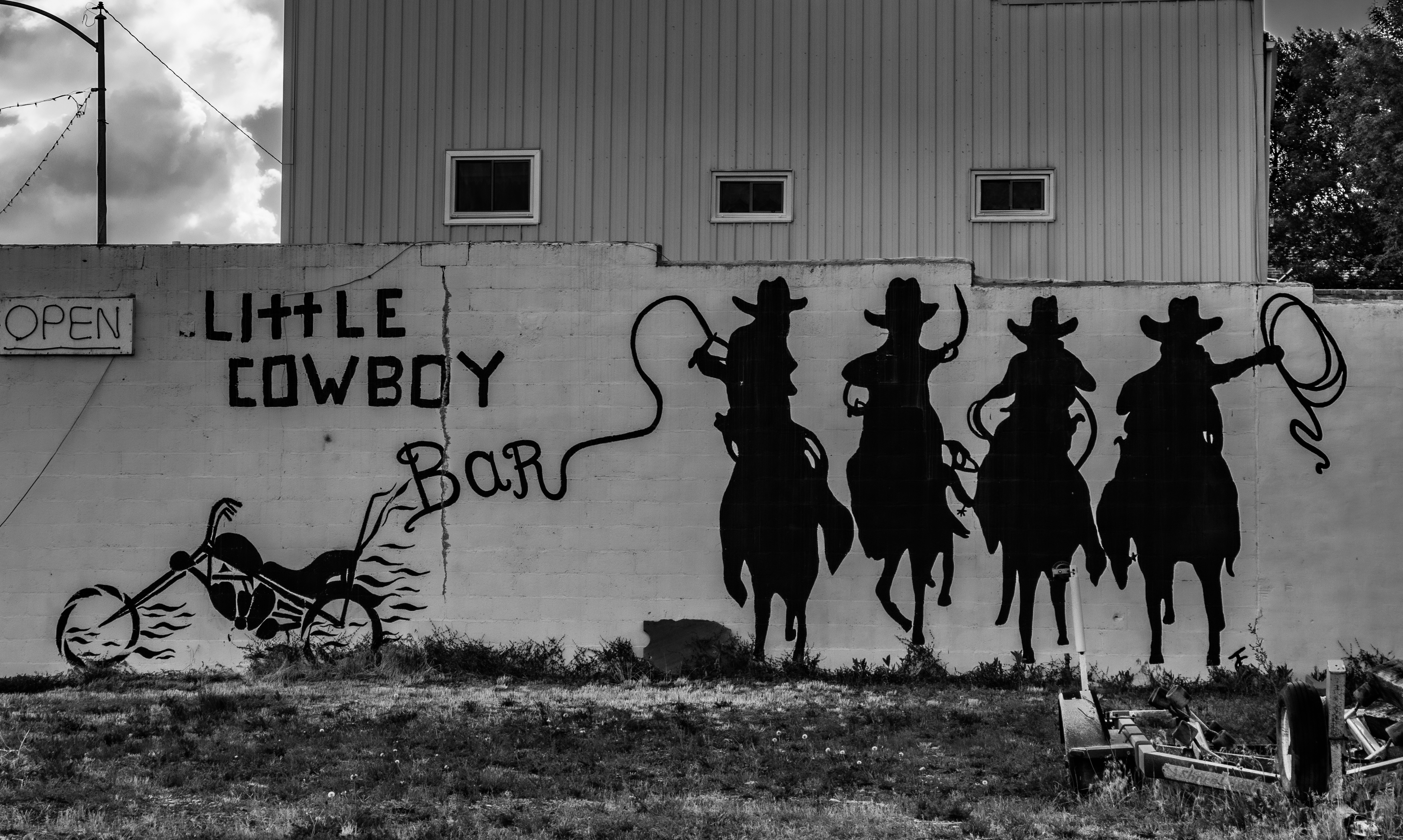 The Monthly Monochrome for August celebrates the sign, one of the most excellent of photo subjects.

A photo of a sign always has a story attached to it. Otherwise what’s the purpose in putting up a sign?

Signs can be like people. And why not? After all, people make them. Signs come in various sizes, shapes and colors – just like people. Just like people they can make you happy or piss you off. They can have their own politics and religions.

A sign can be bossy and stern like your, “No Trespassing – Violators will Be Prosecuted” placard, or, a sign can be polite, such as “Please Clean Up After Your Dog.”

But enough of this palaver. Let’s get to the main event.

Somewhere in the piney woods of Northern Minnesota.
Whatever the speed limit is or was, there’s a legion of gun toters who aren’t down with it. Clearly an example of folks using their Second Amendment right to express their First Amendment opinion. C’mon, admit it. Haven’t there been times when you’ve wanted to do this to a sign? A NO PARKING sign maybe?

Copper Harbor, Michigan.
Is this where you go to purchase mental manipulation? God, how timely. Did the proprietor realize just how pervasive the term gaslight would be, starting in 2015?

Daaamn, isn’t this a bit drastic?
Hercules, California. Okay, so, if you’re pissed off at your pet there are less drastic measures. Maybe take away the chew toy instead? This has to be the very last resort. DO NOT blow up your pet.

And speaking of last resorts.
Osseo, Wisconsin. Self deprecating advertisement. Things can only go up from here. Does this advertising work? It must, because when I was in little Osseo, I wanted to stop and pay a visit, but unfortunately Jamie’s was closed when I passed by. Maybe Jamie was busy trying to warm up the cold women.

Damning with faint praise
Ritzville, Washington. In Ritzville the local grocer is careful to keep expectations to a minimum. I’m not sure why. Ritzville is tiny. This is THE grocery store. They could just as easily call it Ritzville’s Damn Good Grocer or The Worst Damn Store This Side of Hell and probably not miss a beat in business.

North Beach, San Francisco, California.
What’s the problem?
Arrive early if you want a table.
If you want dessert, Victoria Pastry is less than a five minute walk.
Decaf is to coffee as non-alcoholic wine is to a sturdy Zinfandel.
And the sign works because one day I’m going to patronize this place just because of this sign.

Union Square, San Francisco, California.
Just a block or so up from the hoity toity shops like Gumps, Saks Fifth and Gucci are these three signs that appeal to the more basic instincts. This is one of my favorite sign photos.

Fromberg, Montana.
Little Fromberg, population 395, is home to a local landmark, which is. by all accounts permanently closed. The Little Cowboy Bar was both a saloon and a museum which at one time housed Old West memorabilia along with the rare and the bizarre. Included in the latter category were giant African bugs, a jar which owner Shirley Smith claimed contained an alien fetus, and a live tarantula named Heebie Jeebie.

North Beach, San Francisco, California.
A classic dive bar since before I can remember, Vieni Vieni opens at eight in the AM, so if you want a little hair off the dog, this is the place for you. And if you’re lucky a South American camelid will buy you a beer.
Opined a Yelp commenter, “Yes it is a dive bar. But it’s the cheapest bar in the area with nice staff and nice LOCAL patrons. If you are a snow flake hipster who only likes shinny (sic) new soulless places stay away. It’s been around 46 years. I enjoy the company of the staff and yes even the old drunks.”
I couldn’t think of a more ringing endorsement for a tavern. Can you?

North Beach, San Francisco, California.
Well, if you need an excuse to order THE classic libation, here you go. Vesuvio is another of San Francisco’s historic haunts. Founded in 1948, it was the haunt of Jack Kerouac, Allen Ginsberg, Lawrence Ferlinghetti, and Neal Cassady. You can buy a book at the historic City Lights Bookstore just across Jack Kerouac Alley, read it over a drink at Vesuvio or you can just skip the book and enjoy the cool ambience of Vesuvio.

Jeffersonville, Kentucky
When I saw this sign I just had to stop and photograph it. It drew my attention because I’ve always thought that the notions of luck and god are supposed to be contradictory. But what do I know? I don’t go to church.

Port Costa, California.
Welcome to town stranger.
Port Costa is a small, isolated community on the shore of the Carquinez Straits, a narrow body of water whose progenitors are San Pablo Bay, San Francisco Bay, and finally the Pacific Ocean. These billingsgate laden placards sit at the mouth of town, just as you enter the little community. I’m sure this guy’s neighbors, and the town council are just thrilled.

Brickads
I absolutely love these advertisements, also known as ghost signs, which are painted on the sides of brick buildings. Some are faded originals, growing dimmer with each season. Others have been revived with fresh coats of paint. When I was photographing the streets of Ritzville, Washington, I found a man who was doing just that, giving new life to old originals in decline.

Jacksonville, Oregon.
The gold rush town of Jacksonville, in southern Oregon, was founded in 1851. It’s an interesting and charming, historic town that’s become kind of frou-frou. There are a few brickads in town, which I imagine have, over the years, received a fresh coat of new life.

Somewhere in the hollers of West Virginia.
In the early 1890s the Bloch Brothers Tobacco Company, based in West Virginia, embarked on a nationwide advertising campaign, promoting its product on as many as 20,000 barns across the U.S. The ads became so iconic that when the Highway Beautification Act of 1965 ended much of the country’s highway advertising, the law was amended to allow landmark signs like Mail Pouch Tobacco to remain. The Mail Pouch ads were officially designated as historic landmarks. When I drove into West Virginia’s hollers I got myself hopelessly lost (Okay, not hopelessly, otherwise I’d still be there). In retrospect I’m glad that I was able to see and photograph this piece of Americana.

Fromberg, Montana,
This is one of my favorite photos – period. Rex Flour ghost signs are about as iconic as Mail Pouch signs. Again, I feel lucky to have had an opportunity to record this little piece of iconic America. It didn’t hurt that the clouds offered up some drama.

The moral of this post? When you’re out looking for something to photograph, don’t sleep on signs.

Breaking News: It’s been reported that Cee’s Black & White Photo Challenge this week is – Signs. To see more black and white images of signs click on the link to see her take on signs and then visit her comments section for even more sign posts (Sign posts. Get it? I crack myself up).