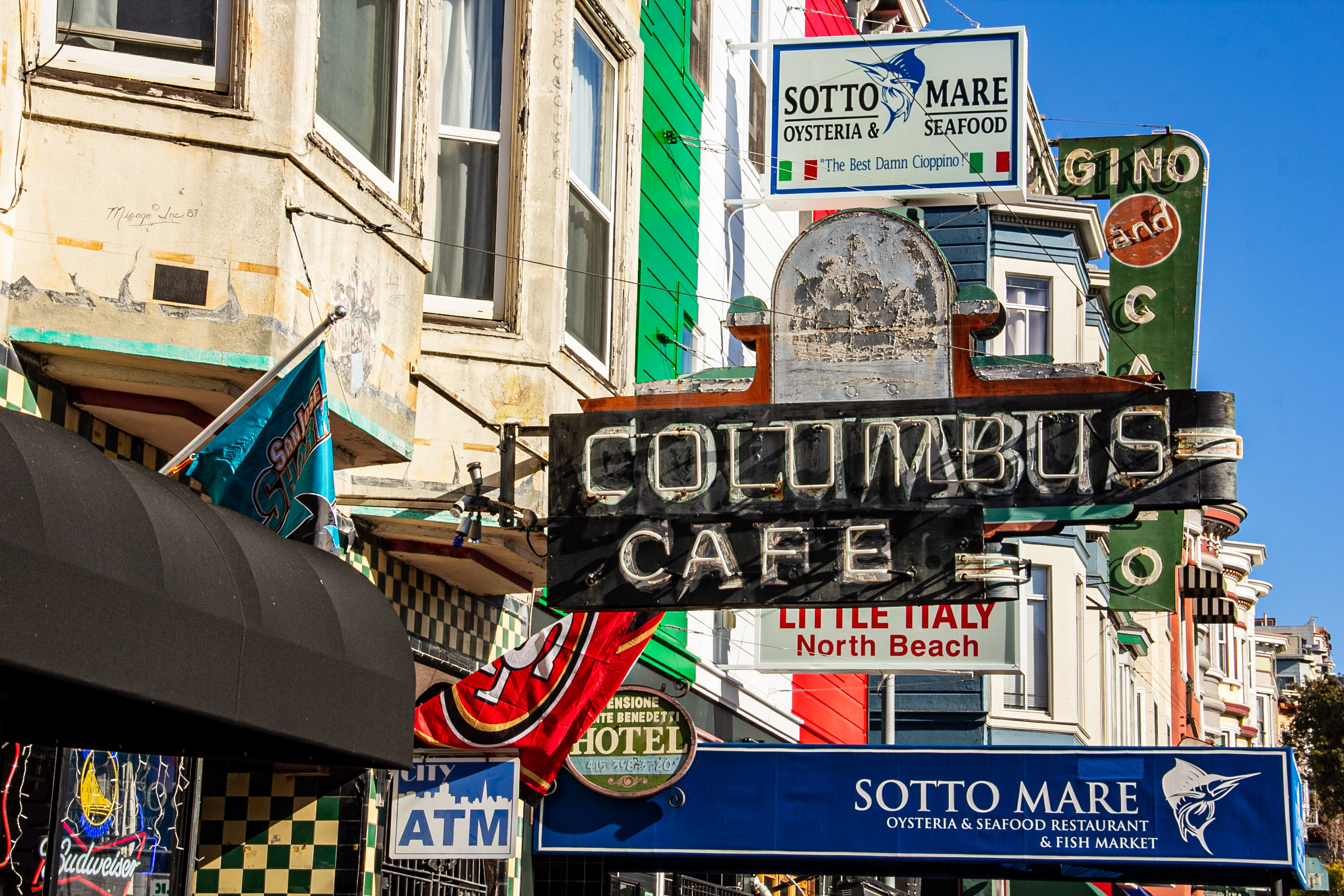 The COVID Chronicles is a series of posts relating my experiences and observations during the pandemic. I hope that this will be the final post in the series.

March 12, 2022. My wife Cora and I are having lunch at Caffe Sport in San Francisco’s North Beach, the City’s Little Italy.

Caffe Sport is a little trattoria on Green Street, half a block from busy Columbus, the main avenue that slices diagonally through North Beach.

This part of the City is a favorite of ours, a merging of Asia and Italy.

East of Columbus is most of North Beach, while to the west is about a quarter of the district, where North Beach and Chinatown coalesce in a delicious, colorful fusion. At one time the boundaries between the two districts were distinct, but over decades Chinatown expanded into North Beach so that nowadays you can hear a conversation in Cantonese while enjoying cannoli at A. Cavalli Café.

Walk half a block south from A. Cavalli to Little City Meats to buy some blood sausage and scaloppini and then cross Vallejo street for dou sha bao, at Fancy Wheat Field Bakery.  Another short walk across Broadway and you’re smack in Chinatown.

Normally there wouldn’t be anything significant about a garlicky Sicilian lunch at Caffe Sport, but today, March, 12th, 2022, it’s an anniversary of sorts.

It was March 13th, 2020, when Cora and I were at Caffe Sport, having what we knew would be a final restaurant meal – at least for the foreseeable future.

Nothing was closed on that Friday but a shift was becoming apparent. We passed rows of empty al fresco tables along Columbus, tables that would normally be packed with diners enjoying pastas and hearty red wine. Washington Square Park, a broad open space in the shadow of St. Peter and Paul Church was nearly empty. That I’d been able to immediately find a parking place where there’s normally a parking dearth augured the coming darkness.

Cheer wasn’t on the menu that day. Our server told us that business was down significantly and he knew that a general shutdown was imminent.

We left a large tip knowing that he would need it, and we wondered how he would fare. On our out way we wished him good luck and he returned the sentiment. It was as if we were parting on long journeys of uncertainty.

If North Beach was seeing a decline, Chinatown was drowning and grabbing for a life preserver. The owner of the Golden Gate Fortune Cookie Company, a tiny little shop on Ross Alley, was desperate for customers, complaining that anti-Asian bias, due in large measure to a racist president’s ravings, was killing his business.

Over the ensuing two years I would visit the little shop to show support. I must have bought enough fortune cookies to stock our local Chinese restaurant.

Grant Avenue, the tourist drag of Chinatown, usually swarming with out of towners looking for cheap t-shirts and Asian kitsch, would, in a short time, be a row of boarded over storefronts and buildings for lease or sale.

A deserted Chinatown on a Sunday afternoon. February, 2021

As we were having lunch, Donald Trump was holding a Rose Garden press conference where he was asked if he took responsibility for the lack of available test kits in the U.S.

Trump responded, “I don’t take responsibility at all.”

“I don’t take responsibility at all,” would become one of the signature moments of the dark times, and a troublesome motto for an administration and a party that made a pandemic political.

It was just the opening salvo of an absurd war that pitted science against political expediency, medicine versus quackery, and benevolence against self-indulgence.

“Responsibility,” became one of the shibboleths of the time along with countless others; “sheep,” “selfishness,” “flattening the curve,” “false positive,” “herd immunity,” “tyranny,” “freedom,” “freedumb,” “super spreader,” “social distancing,” “viral shedding,” and “anti-vax.”

Over the course of two years we learned more than we thought we ever would about virology and epidemiology.

We had a two year lesson in human behavior, both the good and the bad.

We witnessed resolve, dedication and bravery as healthcare workers risked their health working brutal hours in ICUs and ERs.

We followed, teary eyed, the inspiring stories of patients on the edge of death who rallied back to health and then left the hospital triumphantly on balloon festooned wheelchairs while the healthcare staff looked on and cheered.

The loneliness of corona confinement led to the wonderfully unimaginable; an animal shelter in Chicago that ran out of dogs. It had achieved one hundred percent adoption.

We heard the countless, sad stories of death; husbands and wives taken minutes apart, the young and healthy struck down in a matter of days and of funerals unattended.

We also learned just how craven people can be. Politicians downplayed the virus when the pandemic became politically inconvenient. Hunting ratings and pandering to an ignorant audience and hack politicians, Fox “News” became a super spreader of fables and assorted bullshit.

Every day brought fresh examples of irresponsibility, selfishness and lack of self-discipline in the face of a crisis.

Just a days after the Trump Administration declared a national health emergency, the unmasked spring break crowds jammed together, shoulder to shoulder and thonged butt to thonged butt on beaches and in swimming pools.

Threats of violence were hurled at people just doing their jobs to keep the public healthy and alive.

A freak show comprised of a cast of charlatans promoted absurd elixirs, from horse deworming pills to injecting bleach to, yes, drinking urine.

What a roller coaster.

For me the darkest period was the joyless holiday season of 2020/2021.

Our own Thanksgiving celebration of 2020 was to be held at my son’s house. Two days prior, I began to have misgivings. Driving home after photographing waves at an empty beach, I called my daughter-in-law and begged off.

A week later, with COVID on a holiday rampage, our daughter-in-law called to tell us that the planned Christmas dinner at their house was canceled. We ended up exchanging gifts in our garage, all of us masked and socially distanced.

The season hit its gloomiest on New Year’s Eve, when Cora and I were watching CNN. You know things are pretty fucked up when you’ve resorted to CNN on New Year’s. Just before we turned off the TV, CNN played a Barry Manilow song that was thirty-two years old but could easily have been inspired by the world’s crisis.

I suppose that the song, titled “When the Good Times Come Again,” was played as a harbinger of hope but to me it was a dirge to hopelessness.

A short two months later I was overjoyed to get my second Moderna vaccination.

And then came the next low point, an irrational backlash from nuts and politicians (in many instances, one and the same), against the vaccines.

Then came a lull in the virus – then delta – another lull – omicron.

And here we are. It looks like we’ll stumble through after all, like a spent marathoner, the final finisher collapsing and crawling towards the finish line, spectators all gone; no ovation, no celebration.

It was capped off by an American version of Canadian foolishness; a trucker convoy descended on DC to protest what the truckers termed tyrannical mandates, rules that had largely already been lifted or were in the process of sunsetting. It looked all the more ridiculous as it occurred just as a real tyrant was launching an invasion of Ukraine. As the news media largely ignored it, the convoy was lambasted on social media for being a whiney, self indulgent theater of the bizarre.

As of this writing, eighty- one percent of the residents in Contra Costa, the county where I live, are fully vaccinated.

Worldwide, over 4.4 billion people have been vaccinated and I’ve yet to hear accounts of people dropping dead, or growing Golden Retriever snouts or of dicks falling off in measureless quantities.

I suppose that with the end approaching, the unvaccinated will skate.

One person in our own circle has held out and will apparently continue to hold out. The rest of the group made exceptions, not out of respect, but just to maintain détente. I guess there is nothing to forgive but it certainly, on my part anyway, won’t be forgotten anytime soon.

From all appearances life is returning to as it was.

And so two years later, I parked the car on Columbus, blocks away from the restaurant.  The dearth of parking in North Beach is back (and welcome) and on a pleasant, if breezy Saturday, it takes perseverance and a fair amount of luck to find a place.

Walking up Columbus we pass a packed Washington Square Park where a juggler puts on a show. Dogs chasing after Frisbees dash around people seated in groups on the big lawn. In the shadow of St. Peter and Paul Church children clamber on play structures, their delighted laughter mixing with the sound of a nearby band. In another corner of the park comes the squeaky sound of an erhu being played by an elderly Asian man.

A dog chases a Frisbee at Washington Square Park

Further along, we walk past rows of al fresco tables packed with diners enjoying pastas and hearty red wine. A line is forming at Lush Gelato and up the block, the velvet fragrance of cocoa wafts from Z. Cioccolato. Just outside of the Red Window Restaurant diners sip colorful cocktails, a trio plays Latin music, and servers carrying trays laden with tapas, artfully weave through the sidewalk crowd

Before going home, we take a brief detour into Chinatown. While not swarming with tourists, it’s clear that visitors are returning and many of the once shuttered tourist traps are back to selling cheap t-shirts and Asian themed junk.

It’s all starting to look as it once had, though there are still vestiges of the pandemic; restaurant staff are still wearing masks and anyone dining indoors is required to show proof of vaccination. In Chinatown, most of the locals still wear masks, but much of the Asian community did so before COVID was a thing.

Back home I still wear a mask in supermarkets but in the airy gym with high ceilings and giant fans I leave my mask in the car. Oftentimes I just let what the crowd is doing dictate whether or not I wear a mask. Wearing a mask was never a problem for me. I never felt that my “rights” and “freedoms” were being abridged or that health related mandates constituted creeping tyranny.

Two questions do remain for me.

How will history treat our reaction to the pandemic?

My own answer to the first question can be found in the second.

As we face the crisis of a war in Europe will we comport ourselves in a better, unselfish and more reasonable manner?

9 thoughts on “The COVID Chronicles: Finis (?)”