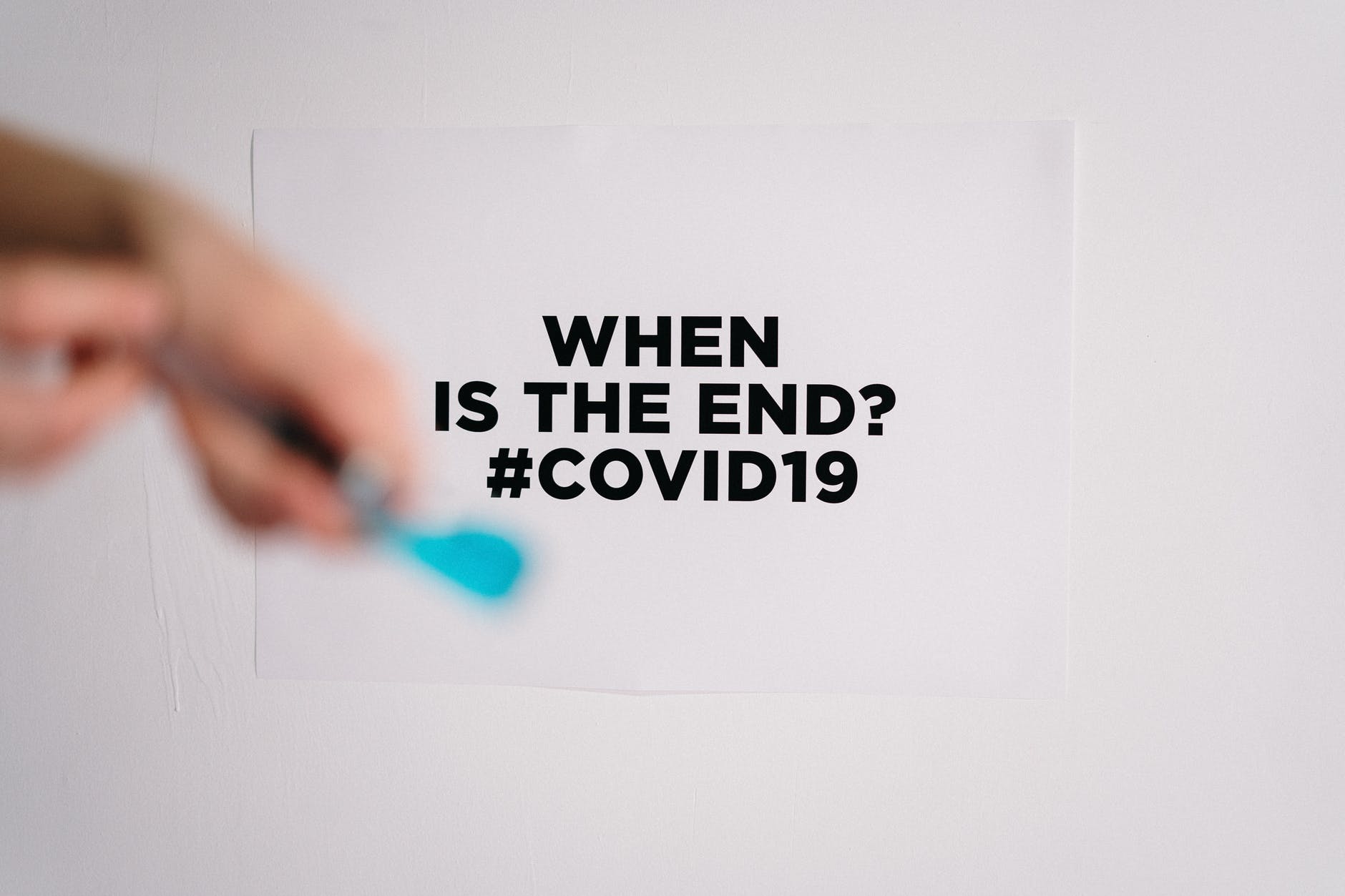 Early in 2020, when rumors of the coronavirus became reality I began a series of posts that I called The COVID Chronicles, a journal of my own personal experiences and feelings in the midst of a global pandemic. I thought I was done with the series.

“You ready to put your mask back on?” he hollered.

He’s one of the maintenance guys who works at a local apartment building. I see him almost every day when Lexi and I pass by the building during our morning run. It’s always been no more than a wave and a, “Hello, have a good day.”

This one particular day was different. I paused during the run and he took a break from his work. We talked.

We agreed that we weren’t happy about having to pull the masks back out of the dresser drawer, or wherever one keeps masks. It isn’t so much the masks themselves, it’s having to do it because of the rising cases.

I told him that back in May, Cora and I had travelled through 16 states and in some places, in some states we hardly saw any masks. Told him about Amarillo, Texas, where it was a maskless free for all.

“Nope. Not in Texas. Not in South Dakota. It’s a different world out there.”

He was stunned. I guess he doesn’t watch the news much. Doesn’t realize that Texas Governor Greg Abbott has not qualms about plays political roulette with the lives of the people under his watch. Has no moral compass, no heart, no common decency.

We talked about the rise in COVID cases, mostly among the unvaccinated.

He told me that he’d been late to the vaccination party. I guess the hesitation wore off or the fear creeped in but he finally got his pokes.

It was the only time we’d stopped and talked and we agreed, we’re sad, we’re baffled and maybe most of all, we’re pissed off that we’re turning back the clock.

Months ago I thought I was done with this little COVID Chronicles series. What a fool I was. After all:
This is America, where a recent survey found that 20 percent of Americans believe that the COVID vaccines contain microchips that will be used to control people.
This is America, where in March of this year, a video claiming that the vaccines would create a generation of zombies went viral. The video claimed that the CDC has a website dedicated to “zombie preparedness.”
This is America where one of the leading immunologists in the world is held, in some places, in lower regard than the charlatans and shamans who pop up on YouTube with their fantastical myths about COVID-19 – and zombies.
This is America, where 52 years ago we celebrated this nation’s great scientific achievement, landing a man on the moon, only to get to 2021 when Tennessee’s top immunization official was sacked because she promoted the COVID vaccine for teens. Let’s be clear, she wasn’t pushing some newfangled, controversial, covert plan, she was merely distributing to medical providers the state’s long standing (34 years) policy called the Mature Minor Doctrine that allows physicians to vaccinate minors above the age of 14 without consent from their parents. Dr. Michelle Fiscus’ firing was clearly motivated by politics.

What a fool I was for thinking that America would actually achieve the magic 70 percent vaccination rate. How foolish? I so thought that I was done with the masking that I gave Lexi two of my prized bandanas; the electric green one and the blue one that matches the booties that she has to wear when the pavement is too hot.

I’m baffled, but more so, I’m disappointed, let down by a nation that once upon a time celebrated science, when we had a president in John F. Kennedy who lauded science, who famously said,
“The ocean, the atmosphere, outer space, belong not to one nation or one ideology, but to all mankind, and as science carries out its tasks in the years ahead, it must enlist all its own disciplines, all nations prepared for the scientific quest, and all men capable of sympathizing with the scientific impulse.”

What in the world happened to America?  How did we get to a 45th President who vilified scientists? How did we become a nation in which science has become the enemy? It’s 2021, let the witch burnings resume.

And so, after a short mask free honeymoon, I’m back to wearing a mask in stores and other indoor places.

To paraphrase Jerry Garcia, “What a short strange trip it was.”

In May, Cora and I set out for a nearly five week long road trip, a loop that took us along the American Southwest and then north to the plains, west through the Mountain States to Washington State and back south to our home in the San Francisco Bay Area.

As we were planning the trip, we were concerned with how our wearing masks would be received in states that were largely rejecting masks.

Were we going to be pariahs in states like Texas and Arizona that had already dropped mask mandates?

As it turned out, most businesses gave the finger to Governors Ducey of Arizona and Abbot of Texas. Motels, stores and other businesses continued to require masks in their facilities.

As we continued our travels, and saw that the COVID numbers were going down and mask regulations were being relaxed, Cora and I relaxed our own personal mask policy. We still didn’t dine indoors but since we had our dog with us indoor dining was off the menu anyway.

And so here we are, stuck at just under 50 percent of Americans who’ve been stuck with the magic needle.

Quite frankly I was stunned on that day in May when the CDC announced the masking guideline, advising that the fully vaccinated could shed their masks but the unvaccinated should continue to wear masks indoors. It was essentially an honor system. I wished that I could’ve been overjoyed and relieved but instead I was angry.

What planet had those CDC folks been on for the previous 14 months?

Were the medicos at the CDC not paying attention when Ron DeSantis of Florida opened up the beaches for spring break and Kristi Noem of South Dakota welcomed the thousands of bikers to Sturgis, with both governors confident that people “would do the right thing?”

The un-masked hordes that went to spring break and to Sturgis were the very people who’d been screaming that they were willing to take their chances, or that masks infringed on their freedom or that COVID was a Chuck Schumer hoax. The CDC was asking the chronically irresponsible to take responsibility. It was like handing over the keys to the Corvette to a 16 year old boy and saying, “Keep it at 55.”

An honor system doesn’t work when you have too many people who lack any shred of honor.

And so now we’re stuck. We’re stuck because the people in charge are stuck. Those in a leadership or advisory role, from Biden and Mitch McConnell and CDC Director Rochelle Walensky, various legislators and governors and everyone else on down, have painted themselves into opposing corners.

In one corner you have the folks who took COVID seriously from the start and then, during the late spring of this year, just plain let their guard down. The ones who’d been preaching to us of the need to keep our guard up either didn’t read the vaccination mood right, or were concerned about their jobs, or were just sick and tired of the fight.

And new mask mandates? Kiss your reelections goodbye. Well, you can always write a book.  Or maybe get an honest job like, I don’t know, digging ditches?

And so they’re stuck now, going on TV, or the radio or social media and even door to door begging people to get the vaccine. Even offering people the chance at a fortune if they just get a stinkin’ shot. Are the vaccine lotteries still going on or have those run their course?

In the other corner you have the people who denied the severity of COVID, have given lukewarm support to the vaccine, or flat out said the vaccine doesn’t work. They’re the ones who were so concerned about opening up the country to save the economy.

And now? The stock market tanked yesterday over fears of new COVID surges and a low vaccination rate. Are Mitch McConnell and Kevin McCarthy suddenly going to go on a “go get vaccinated” road show? Can we expect them to do a 180? Not while they remain in the shadow of Donald Trump.

I’m not at all pissed off about putting a mask on. It is literally no – big – deal.

I’m pissed off at the people who are digging their heels in and won’t get vaccinated, the ones taking employers to court for requiring employees to get vaccinated, the ones who are literally keeping the coronavirus alive and thriving, the ones who were the most vocal, screaming for a return to normalcy and are now the ones keeping us from getting back to normal. I’m pissed because it’s starting to become apparent that without something close to universal vaccination, COVID will be with us F-O-R-E-V-E-R. That’s a long time.

These are the ones in authority, the ones with a bully pulpit, who misuse their influence to mislead, to marginalize the science and denigrate the scientists and the ones who dismiss the vaccine. And for what? So that they can appeal to the lowest common denominator, gain political or monetary advantage or so they can maintain some kind of public relevance.

Florida Governor Ron DeSantis, who has long been vaccinated, whose political action committee has been peddling anti-mask and anti-Fauci merchandise bearing the slogan, “don’t Fauci my Florida.”

This is the same DeSantis who has been fighting so-called vaccination passports, proof of vaccination for those embarking on cruise ships. He calls the policy “unconstitutional.”

Tucker Carlson who has called vaccination passports the equivalent of Jim Crow laws.

DeSantis and Carlson apparently don’t recall the times when your passport required a smallpox vaccination stamp if you wanted to travel to certain countries.

Mad Marjorie Taylor Greene who has spent half a year denouncing the vaccine and spreading vaccine misinformation, and who recently compared people doing door to door canvassing on the importance of the vaccine, to Nazi brown shirts.

Rep. Madison Cawthorn who recently asserted that the door to door canvassing is some sinister plot that will lead to door to door confiscation of guns and Bibles.
“Hey Maw! The feds are bangin’ on the door. Keep your sleeves rolled down. And hide the guns and the Bibles. And for chrissakes, ya need to cover up that painting of Jesus.”
Seriously Rep. Cawthorn?

Ohio Rep. Jim Jordan tweeted. “What’s next? Knocking on your door to see if you own a gun?”

It’s a can’t miss formula if you want to throw the populace into paranoia. Haul out the old bromide that contains the code words, “Socialism,” “guns,” “Bibles” and “confiscation,” in the same sentence.

Sen. Marsha Blackburn, who has been vaccinated, said of the canvassing, “Big Government in control — Joe Biden is sending agents to your door to compel vaccinations.”

At a recent Conservative Political Action Conference, the crowd literally cheered when Alex Berenson, a former New York Times reporter, said, “They were hoping — the government was hoping — they could sucker 90% of the population into getting vaccinated. And it isn’t happening.”

Rep. Carlos Curbelo, R-Fla. explained the political reality and the moral vacuum, “For people who are politically intoxicated, which is a lot of the country right now, it makes sense to celebrate any failure by the administration.”

16 thoughts on “The COVID Chronicles: Turning Back the Clock”