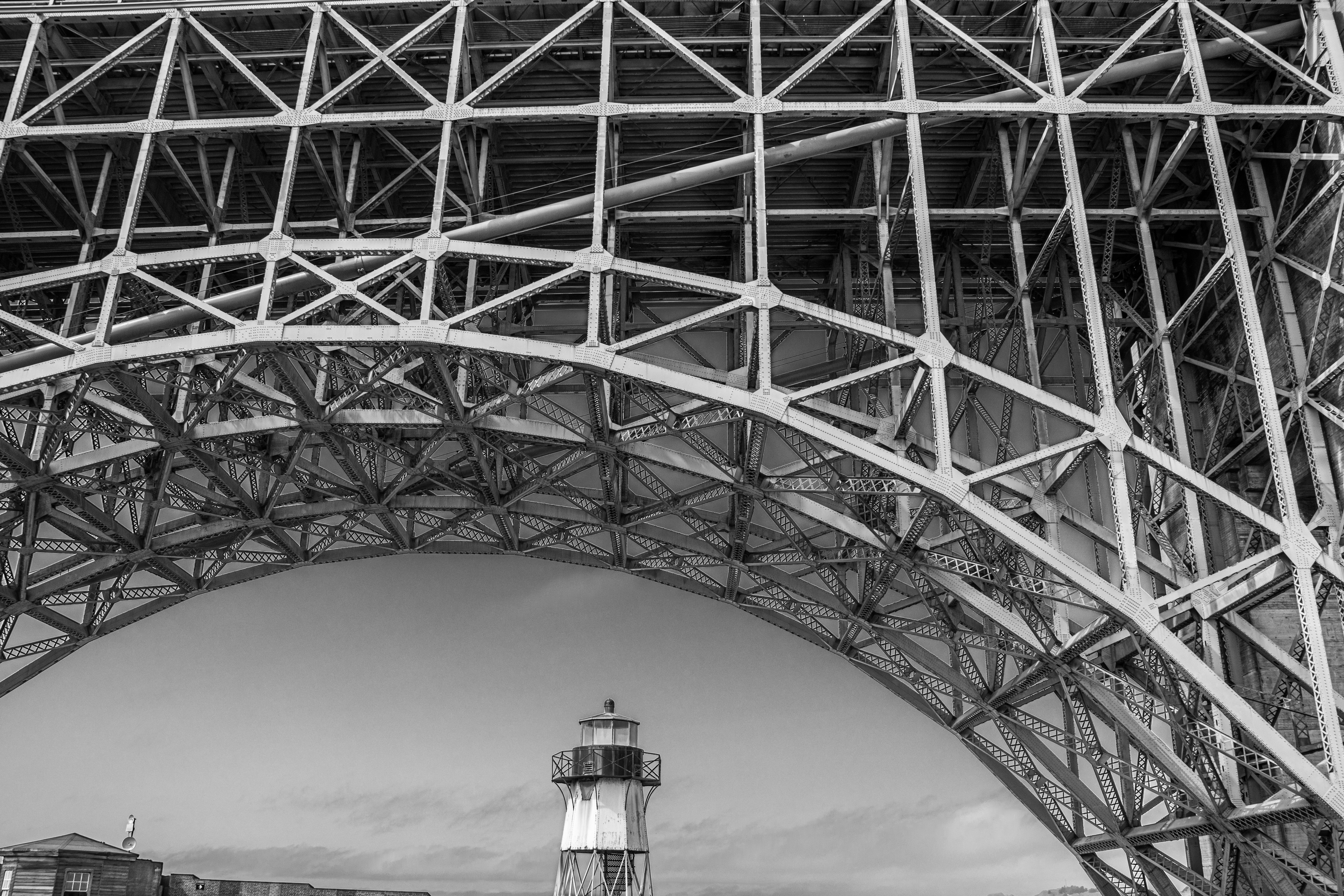 Fort Point is one of San Francisco’s often overlooked jewels. Built between 1853 and 1861 to guard the inlet to San Francisco Bay, the fort, surrounded by water on three sides, rests on the southern shore of the Golden Gate.

While it is a historic fort, one doesn’t have to be a history buff to appreciate Fort Point. It’s a place where one can go to enjoy nature, watch sailboats on the bay or big ships pass under the Golden Gate, or marvel at surfers challenging the turbulent waters.

Fort Point is nestled beneath the Golden Gate Bridge. From the bridge itself you wouldn’t even know that a historic brick fort sits beneath the span’s steel skeleton.

The fort was planned so that the lowest tier of guns could be placed as close to the sea level as possible, thus affording cannoneers the opportunity to skip cannonballs across the water to strike ships right at the waterline.

While the army built thirty similar forts on the east coast, Fort Point is the only such installation west of the Mississippi.

The fort is a maze of brick arches.

Ground floor. Note the arcs on the ground. These mark where tracks were laid to swivel the large cannons which were mounted on wheels.

A shirtsleeve day is a rare day at Fort Point. While the views are magnificent, it’s a cold and windy place. The Pacific wind surges through the gun ports and is channeled through the arches. At the very top of the fort is where you feel the wind’s full force. Every time I visit the fort I try to imagine what it must have been like to be stationed there in 1865; a rainy, windy winter night must have been miserable.

View across the inner quad.

Fort Point, designated as a National Historic Site, has a number of outdoor displays, a museum and rooms that are furnished as they would have been in 1860 (During COVID the indoor displays are closed).

The guns of Fort Point were never fired in combat.

Looking down the northern parapet.

The Pacific Ocean viewed through the rusted remains of a gun port cover.

Looking south along the Pacific Shore. Taken from the top of the fort.

Standing on the parapet, the sound you hear is that of the thousands of cars passing on the bridge immediately above. In 1865 the only sound would have been of the waves crashing on the rocks below.

Underneath the Golden Gate Bridge from the parapet of Fort Point

Old and new. The Fort Point Light dwarfed by the undercarriage of the Golden Gate Bridge.

Fort Point sits at the terminus of a recreation path that starts 7.3 miles away at Oracle Park where the Giants play baseball. It’s a refreshing stop for runners and cyclists; a place to catch a breather and a view before starting on the 7 miles back.

The big swells begin just on the ocean side of the bridge and become a break just underneath the bridge. The waves head straight east, sometimes breaking again to the south along the rocky shore. Surfers clamor over the rocks below the fort and paddle out to the swells to catch a promising wave.

Below, a surfer rides a wave and disappears into the thundering water.

6 thoughts on “Monthly Monochrome: The Fort and the Bridge”