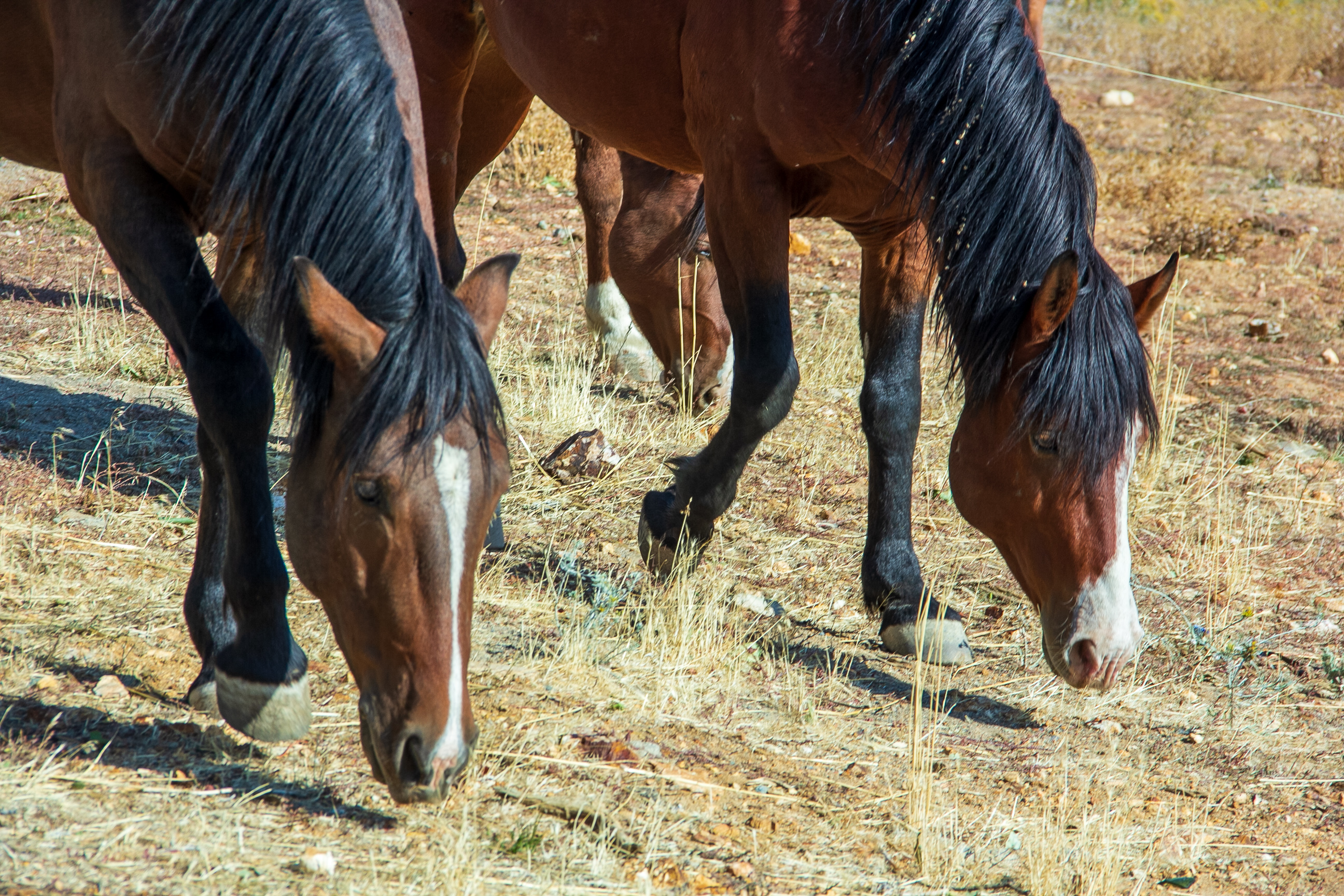 Note: Some of the photos in this post were taken with my phone and others with my camera so the quality and consistency is not what I would normally post. The photos are a necessary ingredient to be able to fully appreciate the story.

Cora and I were just pulling out of the historic silver mining town of Virginia City heading north to Reno. We had just left our motel and passed the old fourth ward school building when we saw a small band of wild horses grazing just off the road.

“Do you want to stop and take some pictures on your phone to post on Facebook?” I asked.

Cora enjoys Facebook and spends a fair amount of time on the site. I’m not being judgmental here. While I can more or less take Facebook or leave it, most of her family is still in the country of her birth, the Philippines. Facebook is her bridge across the Pacific.

I drove up the road a bit figuring the horses might be like the ones I’ve photographed east of Sparks, Nevada. Those horses tolerate me for a while, but if I get into their discomfort zone they trot off. To see some photos of those horses you can visit my earlier post, The Land of the Mustang.

We got out of the car and we’d no sooner stepped onto the rocky open lot when one of the horses ambled towards Cora. I was waiting for her to retreat back to the car but instead she waited for the horse to come right up to her. The horse was a chestnut color with a black mane and a white strip running down it’s face. It was a small animal only slightly taller than Cora. They were practically looking eye to eye.

The horse continued towards Cora and stopped right in front of her. Cora has been tentative around horses before so I don’t know what amazed me the most; the horse approaching Cora or Cora standing her ground. She reached out and stroked the horse’s muzzle, talking to the animal in soothing tones as one might talk to a child.

“I know, you’re hungry aren’t you? I wish that I could feed you but I can’t.”

Cora knows that feeding a mustang might nourish her own soul but it can make the horse sick.

She continued to pet and talk to the horse and then she noticed the wounds and gashes that scarred the beast’s body.

“Oh my lord, look at all your wounds.”

After a short time the horse went back to grazing on the tough, crackling sagebrush and we got back in the car and left the little band behind.

I imagine that this group of horses has spent much of its time near Virginia City and over that time has overcome its fear of humans. They’ve probably been fed by well meaning tourists who don’t realize the potential health hazards to the mustangs.

Nearly every trip we take to Nevada includes an excursion to see and photograph the mustangs. The site of these magnificent animals both thrills me and hurts my heart. Theirs’ is a tough, unforgiving life of survival; meager food, little water, especially in drought years and harsh weather ranging from snow in the winter to blazing hot summers in a rugged, rocky land.

This little band aside, even the wildest, shyest horses I’ve photographed have allowed me a latitude that most wild animals wouldn’t tolerate. I believe in my heart that there’s a spark, maybe just a faint flicker in the souls of these animals that tells them that their kin, past and present have been centuries long partners with humans. For more on our recent trip to Virginia City follow the link to VIRGINIA CITY DIARIES: BONANZAS, MARK TWAIN AND BLOODY MARY’S TO GO

11 thoughts on “A Mustang Moment”