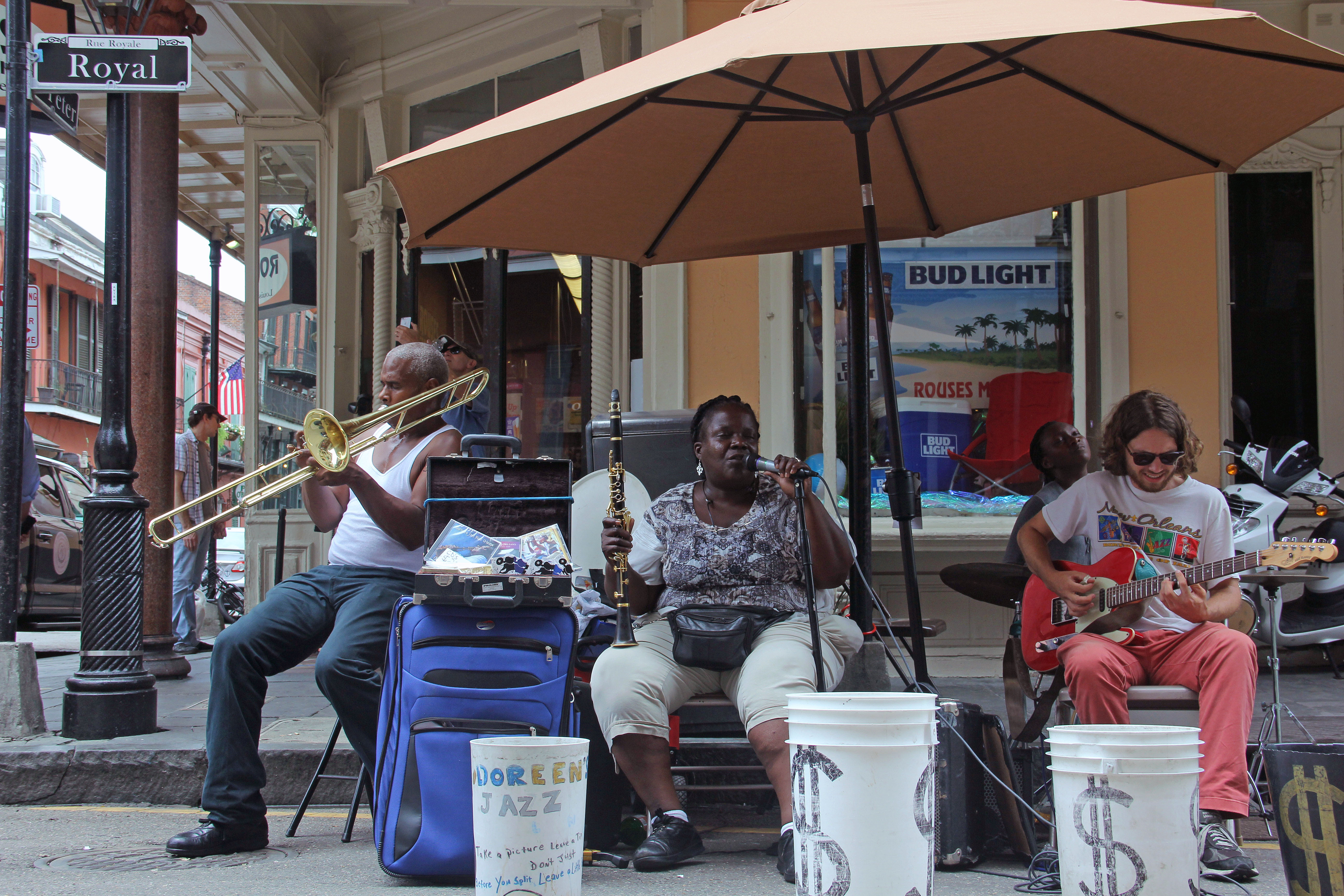 We’ve left Erzulie’s Voodoo Store, strolling along Royal Street. It took some coaxing to get Cora to go into Erzulie’s and she was relieved and happy to leave. Left her a little creeped out, it did. Like most of the French Quarter streets, Royal is a splash of color, heavy on the black, gold and purple. Balconies with wrought iron railings decorated with flowers, bushy green plants a sprinkling of New Orleans Saints banners and cascades of multicolored beads.

Wrought iron rails and fences are everywhere in the French Quarter and the one on Royal in front of Saint Anthony’s Garden is adorned with paintings, colorful renditions of this brash, spirited city called The Big Easy.

It’s a quick stop because we’ve been pulled up the street by a wailing clarinet and a voice that powers up and down the block.

We’ve found a patch of curb to sit on across the street from Rouse’s Market at at the corner of Royal and St. Peter. Royal Street; a name that couldn’t be more fitting at this moment because we’re in the presence of local musical royalty, Doreen Ketchens also known as Queen Clarinet.

There’s a quartet; a cool young guitarist in shades, a tuba/trombone player stripped down in the afternoon heat to a white ribbed t-shirt and a young woman on drums, Doreen’s daughter, Dorian Ketchens-Dixon.

A talented group for sure but it’s Queen Clarinet who hold court here and the gathering crowd are her loyal subjects.

But it isn’t just the music. Look at her expressions; watch her boundless passionate joy and the oneness with her art. She banters with the crowd, a symbiotic exchange of energy and gaiety.

Where else but in New Orleans can you walk down a street and for the price of a tip in a jar hear a musician who has played for four presidents and brought jazz to Africa, Asia, Brazil, Canada, Columbia, Europe, Mexico and Russia.

She plays Tin Roof Blues, House of the Rising Sun, St. James Infirmary and a rendition of Summertime that so bursts with soul that it brings tears to my eyes. And then there’s When The Saints Go Marching In and I recall dad and his love for Dixieland. Doreen would have had him tapping his toe and turning to me with his wry smile, “Now that sonny boy, is real music.”

Or better yet, get yourself to New Orleans, go to Rouses and grab a fried catfish po-boy and spend a warm afternoon on Royal Street paying homage to the queen.

7 thoughts on “Hail to the Queen”