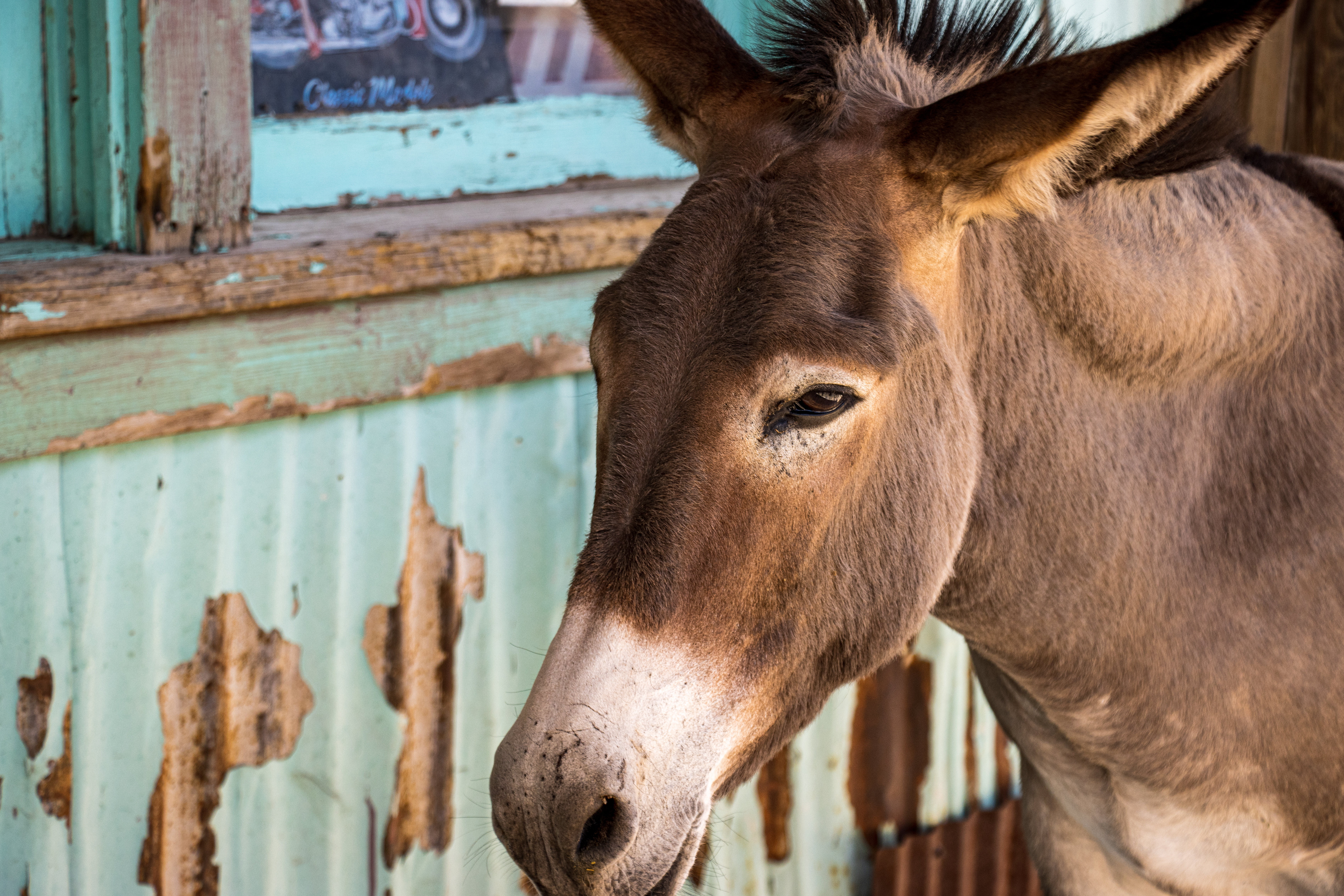 We enter Arizona, through the town of Mojave Valley. I slow down at the Welcome To Arizona sign and ask Cora if she’d like me to take her picture standing by the sign. She declines.
“It’s too hot,” she says.

This is Cora’s first visit to Arizona and she’s in for a lot of first visits to states; by my quick count it should be 11.

In crossing the Colorado River into Arizona, I took a slight deviation from a section of Route 66 called the Oatman Highway. It’s been a long drive, it’s hot and after a stop at the town of Oatman the drive will still be long and still be hot. So I’m willing to sacrifice a view of the old bridge that crossed the Colorado back in the day, in order to cut the drive time to Oatman exactly in half.

The drive takes us through more sections of rugged, rocky and hauntingly beautiful country. The road is mostly flat until we get to the outskirts of Oatman where the road rises to the old mining town.

On the road to Oatman

A few minutes outside of town we come upon a wild burro standing in the middle of the road. The moment that I stop the car, the burro ambles slowly towards the passenger side.

The burro is mooching for food. It’s what the burros of Oatman do for a living.

Cora is enchanted, Lexi not so much. It’s Lexi’s first ever burro sighting and as soon as the beast gets to the window, Lexi growls and lets out a bark that sends the burro trotting away.

Oatman is often called a ghost town but it is far from that. What started as a mining town/tent city has become a thriving tourist attraction, with most of the visitors coming to see the burros.

In 1863, a miner named Johnny Moss discovered gold in the area of what is now Oatman and, as discoveries of precious metals are wont to do,  it kicked off a bout of gold fever, causing the first boom. Over the decades, the town went through a roller coaster of booms and busts.

Many of the miners brought burros with them and, over the years, the beasts were either turned out into the wild when they were no longer needed or they simply wandered off. The Oatman burros are descendants of the burros that came to the area with the miners.

The burros live in the rugged, surrounding high country and descend into the town in the morning to go about their normal workday of posing for photos with the expectation of being remunerated in food.  It’s the equine equivalent of a nine to five.

Apparently some local businesses sell carrots for visitors to feed the burros, and while I’m not a fan of feeding wild animals in general, the carrots seem to be a better option than the popcorn and other crap some tourists feed the burros.

Oatman is like many other so-called ghost towns that have been rebuilt to resemble their 19th century appearance.

The difference between then and now is the addition of modern conveniences, such as hot dogs, burgers, salt water taffy, plenty of t-shirts and a variety of old west themed knick knacks, gimcracks and gewgaws. A “sheriff” roams the town and every so often a gun fight is staged. Old West ghost towns are just about the only places in America where you can still buy toy guns and faux Native American head dresses like you see on TV.

It’s the wild west that tourists from overseas demand to see, even if the history is a bit suspect.

There’s nothing inherently wrong with this entrepreneurial formula, but Cora and I have seen the same show in Virginia City, Nevada and Columbia California, so after an hour or so of poking around we hit the Oatman Highway towards Highway 40.

It’s a narrow stretch of downgrades and switchbacks that takes us to Cool Springs, or what’s left of it. At one time Cool Springs was a way station with a bar, a café, cabins and a filling station.

In 1953, a deviation of Route 66 bypassed Cool Springs and within ten years the way station was abandoned.

In 2001, a real estate agent by the name of Ted Leuchtner, bought what was by then only ruins and rebuilt the filling station to its original appearance, based on old photographs.

Ethyl gasoline was your basic middle of the road, leaded gasoline. It harkens back to the days when a service station attendant would greet you at your car and you’d holler, “Fill it with ethyl.”

The pump also harkens back to a crude little joke that made the elementary school circuit when I was a kid. At the time a sitcom titled I Love Lucy, was one TV’s most popular shows; had been for years and years.

Two of the main characters of the sitcom were Fred and Ethyl Mertz.

“How is Fred Mertz like a gas station?” asks the jokester.
“I don’t know, how?”
“They both pump Ethyl.”

We would titter with pre-pubescent glee even though some of us didn’t quite understand the joke. We just knew it was a dirty one and that was good enough.

Before leaving I have to make an impulse buy; Route 66 soda in glass bottles. Cream soda for me and raspberry for Cora. And yes I’m keeping the empties. They’ll make interesting bud vases, or they can be seedlings for my own bottle tree ranch. The homeowners association would get quite a hoot out of that.

As we pull out of Cool Springs I think about telling Cora the Ethyl joke but she wouldn’t get it anyway, so I just titter to myself with nostalgic glee.

Below: Views of Cool Springs.

Our overnight stop is The Stagecoach 66 Motel in Seligman, population 456. Seligman met the threat of extinction, by capitalizing on the history and nostalgia of The Mother Road. With Seligman and other similar little bergs on life support, a local barber named Angel Delgadillo, wasn’t content with pulling the plug. Delgadillo and other locals decided that the history and lore of The Mother Road could be a viable industry.

From the Visit Arizona website, “Seligman successfully made the transition from railroad town to Route 66 town, however when Seligman was bypassed by Interstate-40 in 1978, it suffered a devastating economic blow. Eventually Seligman would use this setback as a catalyst to make a name for itself. In 1987, Seligman gained its name “Birthplace of Historic Route 66” due to the efforts of Seligman residents, most notably Angel Delgadillo, the Seligman barber who convinced the State of Arizona to dedicate Route 66 a historic highway. This grassroots effort to bring Route 66 back not only revitalized Seligman but it also caused world-wide interest in Route 66 and the old-fashioned Americana that it represents.”

The Stagecoach 66 Motel represents that Americana. Built in 1965, it’s still the bare bones, little family owned motor lodge that offered a bed, a TV with three channels and very few frills. Gravel driveway, a single story, and you pulled your car right up in front of your room. No stairs, please and thank you.

These were the places that you pulled up to late in the afternoon, after driving all day in the family station wagon. There might be a line of them, some with the deep red NO sign flickering over the word vacancy. Finally you’d see a place with a vacancy, you’d breathe a sigh of relief, pull in and pay cash, or write out a check.

At some point these simple motels fell out of favor, pushed aside by the big chains, Best Western, La Quinta, Red Roof and the dozens of others that offer amenities that the independents couldn’t offer. Frills like a gym, a “business center,” and the complimentary breakfast; yogurt presented in an ice bath, mini boxes of Sugar Frosted Flakes, frozen waffles and scrambled eggs shaped like discs that resemble something you’d fling for your dog when Fido is wanting to have a game of fetch.

Our room at The Stagecoach 66, being a pet friendly room, is decorated in a 101 Dalmatians motif.

When I check in, the innkeeper, an older woman with a gravelly voice, hands me a room key. You know, a key, one of those brass things you stick in the knob and turn.

I’m grateful for that. I’ve gotten tired of the electronic cards that never seem to work for me. I wave the little card in front of a pad that flashes flickering red lights. After a few waves of the card and some “Dammits,” the green light flickers and I grab and turn the door handle to find that I didn’t move quickly enough and the door is locked again.

While we were on the road to Seligman, I turned to Cora.
“I guess that 40 years ago we never would have expected that we’d be spending our anniversary in a dusty little town in Northern Arizona.”

For the past few months I’ve been wondering what to get Cora for our anniversary. We’d long ago stopped giving each other anything more than cards. Some years we actually forgot our anniversary.
“Wasn’t it our anniversary a couple weeks ago?”
“Uh, yeah, I guess it was.”

But this one is our 40th. That’s kind of a big one and so I shopped online for jewelry or maybe a new watch.

Back on the road, I pointed to some rock formations off to my left
“Look!”
“Nature,” she exclaims with unabashed glee. “I love it.”

And then it occurs to me. This trip, this great circle route through America; deserts, forests, plains, mountains, big cities, small towns, and a stew of American cultures is the best gift I could’ve given.

To be clear I never planned it that way. One morning over breakfast I said let’s take a long road trip; just you, me and Lexi.

We could’ve stayed in the Bay Area. We could have been celebrating our anniversary at a fancy, expensive restaurant in San Francisco. But not today. Not this year. Today we celebrate our 40th dining at Delgadillo’s Snow Cap Drive In, in Seligman, Arizona, population 456. We’re on the outside patio and before settling down to eat, I ask the people at the next table if someone could take our picture. I explain that it’s our 40th anniversary. Naturally this brings about a flurry of congratulations and a few minutes of talk. They’re locals, and The Snow Cap is their hangout when they don’t feel like cooking.

Cora and I finally turn to our anniversary dinner. She has chicken nuggets, fries and a root beer float and I have a bacon cheeseburger with onion rings and a vanilla malt.

It’s the best anniversary dinner we’ve had in forty years.

Below, views of Seligman, Arizona.

23 thoughts on “Route 66 Arizona: Burros and a 40th Anniversary Burger”