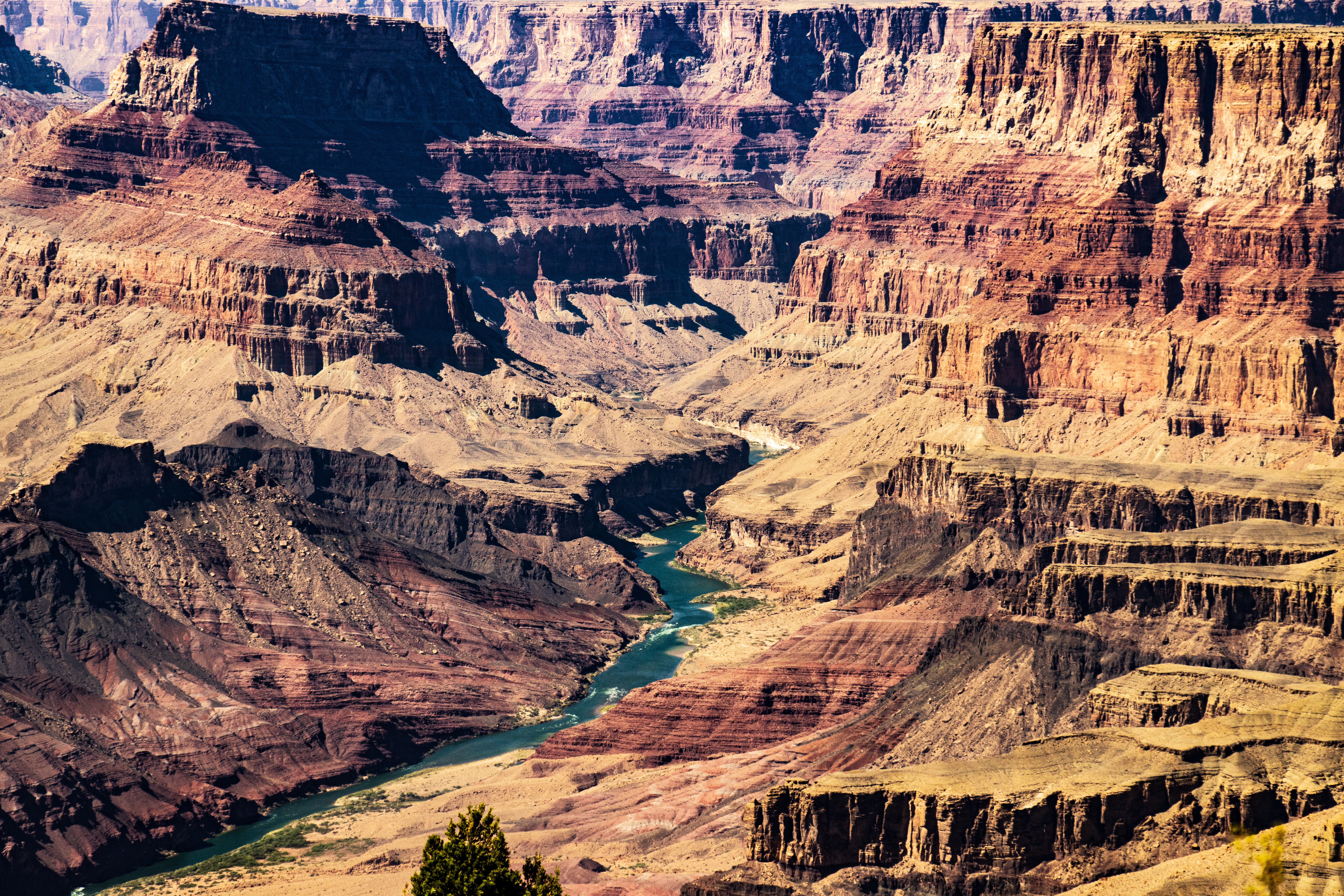 Mother Nature. Sometimes she can be a real; you know, that “B” word? When she gets to feeling a little fishwifey, she’ll cut loose with an earthquake in the San Francisco Bay Area, where I live. I had a friend in Missouri who used to hunker down when the tornadoes hit and over in the Philippines, Cora’s relatives deal with typhoons. And I haven’t even mentioned climate change (but let’s be honest, that’s largely on us; the unruly, selfish kids).

And then there are those times when Mother Nature goes on one of her creative jags, gets fixated on some work of art (and she can crank out some doozies) and can’t seem to stop adding on. Sort of like Elmer’s Bottle Tree Ranch, only on a grand scale (for more on Elmer’s Bottle Tree Ranch click here). Grand meaning the Grand Canyon. Grand meaning, according to some scientists, a work of art that’s been in progress for 70 million years; and she has no intention of stopping. The Grand Canyon is forever changing.

Today’s destination is The Grand Canyon and we need to get an early start to the day.

The Stagecoach 66 Motel doesn’t start serving breakfast until 10 o’clock. The motel actually has operating hours. You might be staying there for 24 hours but the staff is some woman and her husband and they’re only at your beck and call starting at 10. There’s no night clerk at The Stagecoach so if you get into town after closing time you might consider finding a nice turnout on the highway so you can bed down in the car.

I’d really like to get breakfast at the nearby Roadkill Café and OK Saloon. The Roadkill is a Seligman, Arizona institution offering culinary delights such as, Splatter Platter, Swirl of Squirrel, and Highway Hash. What could be more delectable?

Roadkill Café; that’s one of those business names where, as the saying goes, you takes your chances. You’re counting on more people appreciating your creativity than being turned off by your crassness.

During our visit to Quebec City I enjoyed browsing through a little boutique in Quebec City called Fucklamode. They sell clothing that bears their logo – Fucklamode; and in really nice script, I should add. I wouldn’t wear one of their shirts but it’s a clever little bit of marketing. I suppose that if I was ever in Sorrento, BC, Canada and I needed some machine parts I’d check out Wally’s Private Parts, and if my car broke down in El Centro, California I wouldn’t hesitate to seek out a Camel Tow.

No time for a sit down breakfast, so it’s with a heavy heart (mine is the only heavy heart) and empty stomachs that we pass on The Roadkill.

This diversion from the general course of Route 66 is a late change to the itinerary. When I was first planning this trip I’d planned on a night at the Grand Canyon but rejected it for a lack of accommodations; Grand Canyon would have to wait for another trip, another year.

And then just the day before we left home I took another look at the map (the paper one that you spread out to get a lay of the land).
“You know Cora, the Grand Canyon isn’t that far out of the way that we couldn’t make a short day stop just to check it out.”
“Okay.”
We were both so blasé about it. Kinda like, “There’s a Target a couple blocks away from the motel in Flagstaff.”

We’re eastbound on Route 66 until the town of Williams, where we turn north. Williams, is a quaint little town with, according to the guide books, some great old Route 66 signage. Photographing the classic signs was one of my goals for he the trip but I’m bagging the signs for another time, if there is another time.

It’s a 60 mile drive from Williams to the Grand Canyon Visitor Center. Williams is the major jumping off points for the park and it’s where you start seeing the marketing of the Grand Canyon in earnest; souvenir shops, signs, tour companies.

We make a brief stop at a Williams convenience store for a bag of ice and a walk through the parking lot tells me that America is traveling again. Travelers rearranging luggage in the trunk, pouring melted ice water out of coolers and dropping fresh bags in, and out of towners, donning short pants and t-shirts from previous attractions.  Dads and grandads pour out of the store with sacks of chips, soda and other junk to keep the clan happy for the hour or so drive to the park. It’s all part of the road trip shuffle.

License plates from everywhere; California, Texas, Minnesota, New York, Pennsylvania. Stand on a street corner for an afternoon and you might see all of the lower 49 pass you by.

We’re in the car queue at the park entrance and I’m feeling the same sense of anticipation that I feel when visiting any park; nothing special – really. Not the excitement that I’ve felt every time I’ve visited Yellowstone.

It’s a short walk from the parking lot to the South Rim Trail. The weather isn’t what we expected for Arizona. We expected nature’s thermostat to be reading in the 90s (F), but It’s cold, and the wind is howling. Lexi, with her long hair blowing in waves along her body looks like a four legged, black wheat field. We’re not at all prepared for this weather. Now I know how the tourists to San Francisco feel, shocked by a foggy, cold ocean breeze that belies California sunshine. Blame it on Tony Bennet. The morning fog doesn’t “chill the air,” the fog makes it colder than hell and it hangs around till mid-afternoon.

As you get closer to The Grand Canyon Rim Trail you start to see a glimpse of the walls on the opposite side of the canyon. With each step you crane your neck, higher and higher, because you’re starting to understand that you’re approaching something special.

Cora and I are awe struck, and awe struck doesn’t begin to describe that first sensation upon the first glimpse. It is absolutely breathtaking. There are simply no words.

We look at the multicolored expanse before us, look at each other in silence, shaking our heads, smiling and then look back at the magnificence before us.

It isn’t long before Cora puts into words exactly what’s in my head.
“I can’t believe it. I want to cry.”

We walk along the rim trail, stop at some of the overlooks and take photographs that can’t even begin to describe the panorama before us. Pictures may be worth a thousand words but there are no pictures and certainly not a thousand words that capture the Grand Canyon.

There is no lens wide enough or powerful enough; no photographer talented enough; and no writer can possibly have the audacity to believe he can begin to describe the scene before him.

After an hour or so on the rim trail we have lunch and I think to myself how foolish I was to be so nonchalant about this special place.

The original plan was to see the South Rim and turn back for our next overnight stop, Flagstaff, but we want to see more. The Desert View Drive follows the course of the rim for 23 miles. There are turnouts along the way. We spend about an hour and half on the drive before departing the park from the east end through the town of Cameron.

We spent far more time in the park than we’d anticipated. It was windy, it was cold, we weren’t dressed for it and Lexi, amped up by all the people, was an unruly load. None of that could put a damper on our experience.

If I’d thought that the whole road trip was a nice 40th anniversary gift for Cora, then the Grand Canyon was the diamond.

The drive to Flagstaff takes us through a segment of Navajo Nation, over 17 million acres of Native American territory. Along the drive we pass a number of empty wooden stalls and shops that must have been trading posts. Many of the stalls and kiosks look neglected. Is this a casualty of COVID?

We pull into Flagstaff very late in the afternoon, exhausted and cold but with a memory that we can never hope to accurately describe.

I’ve often said that Yellowstone National Park is one of my favorite places on Earth. It certainly has any city beat by a damn site, and I’ve been to some destination cities; New York, Rome (Italy, not Georgia), San Francisco, New Orleans, Montreal and Nashville. Hell, I’ve even been to Stockton, California.

Cities are fun, but they only hold my attention for a short time. That’s not true with Yellowstone. The author of the Moon Yellowstone Guidebook describes the park as a place where you could spend a year touring and hiking, and still just barely tap its richness; and that’s true.

For sheer variety of natural wonder, Yellowstone is unmatched. But for outright, astonishing beauty and grandeur the Grand Canyon stands above anything that I’ve ever experienced.

You can have your Roman Colosseum, your Sphinx, your gleaming skyscrapers and your Great Wall. Man’s creations are puny and insignificant, and certainly more ephemeral than what Mother Nature has blessed us with. Her works of art will outlast anything that man can create, and if humankind doesn’t watch itself Mother Nature will tire of her wayward children and her wonders will outlast man.

Note: Comments are much appreciated. My replies have not been timely during this trip. I will respond to all comments. It just might take a little extra time. Thank you in advance to all those who leave comments.