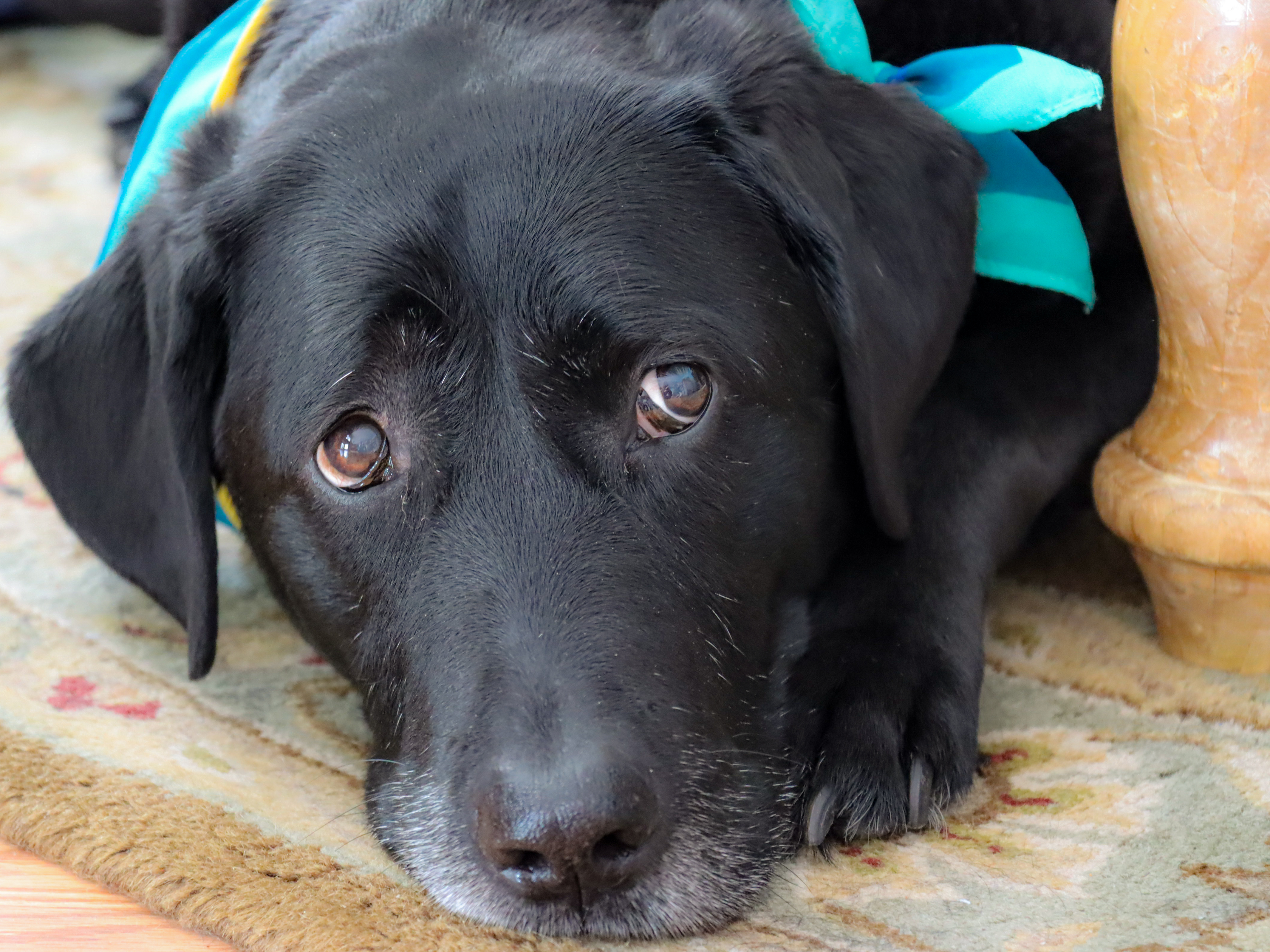 The banner photo for this piece is of Chloe. Chloe, 12 years old, is my daughter’s dog. She’s the canine matron of the domestic circle. With her dignifying touches of gray, Chloe is the wise, stately dog in contrast to my Lexi who’s essentially berserk and slapstick. Well, Chloe is wise and stately if you ignore her taste for goose poop.

I took the photo of Chloe as a trial shot with my new camera. A Canon 90D, it’s a three step upgrade from my 60D. It was expensive but worth every penny. Just don’t tell my wife about the expensive part.  I’m still on the learning curve and haven’t quite finished reading the 200+ page instruction manual. Luckily many of the controls and menus on the 90D are similar to my old camera. We’ve come a long way (like including Bluetooth) from the old Kodak Brownie camera.

Below are two other trial shots. A daisy in our front yard and a sunset (because as a snooty pro photographer once said, “Sunsets are cliché).

Meanwhile on the COVID front.
President Biden has predicted a return to normalcy by Christmas. Yeah, I know it seems like a long way off but it is a string of holiday lights at the end of the tunnel. I’ve always cringed and expressed an “Oh gawd no,” when someone has brought up the old “Only ________ days till Christmas, but let me say right here and now, “Only 309 more days till Christmas.”

Even better, one of CNN’s big giant medical head experts mentioned Thanksgiving as normalcy day. Let’s hear it for Thanksgiving.

Please people, behave, be patient and don’t screw it up.

Speaking of having patience, there’s talk among city officials and business leaders in San Francisco about kick starting the cable cars again. No, no and no. Let’s just err on the side of caution. I love the cable cars but you can’t get on one and avoid being crowded and they attract crowded lines. I haven’t ridden one in years but I love them. Residents actually used to take the cable cars as normal transportation until costs and lines of tourists discouraged the locals. So with no practical purpose beyond goosing the tourist dollars a bit this is just another money motivation.

Today I got my second Moderna shot. This is the one that I’m told is going to give me chills, fever, soreness and turn my stomach. I’ve stocked up on Jell-O in the event of the latter.
I’m pretty pissed off at Kaiser. Their rollout has left something to be desired. Kaiser claims to have only received 300,000 doses but logic and some simple math tells me that would barely be enough doses to cover two shots for their employees, let alone the rank and file, plenty of whom have received their second shots. My wife, older and more vulnerable than I, keeps trying to get an appointment and the response has basically been to tell her to “go kick rocks.”

I took note of Black History Month when I had children in elementary school. At the time I wasn’t a fan, feeling that there was no compelling reason to put the regular curriculum on hold for a full month. For years I held on to that notion.

I’ve moved on, evolved; realizing, when looking back, that the history I was taught in elementary and high schools was sorely lacking when it came to Black America. But for a brief, sanitized version of slavery in the antebellum south and a quick mention of George Washington Carver, American history was white history.

An excellent television ad is being run in the Bay Area featuring Golden State Warriors guard Steph Curry. It’s a no frills ad that highlights the Warriors’ campaign called Beyond28 to emphasize the importance of celebrating Black history beyond the 28 days in February; to honor the successes and the struggles and to pay tribute to legends all year long.

It’s an emphasis that we find particularly necessary in order to offset the intolerable behavior by America’s 45th President, his administration, his enablers and many of his followers.

The great bluesmen
During the short life of these Friday posts I’ve included a small musical chapter. This week, in honor of Black History Month we’re acknowledging the Black bluesmen of the late 19th and early 20th centuries.

They all had three things in common; they had unique, soulful singing voices; they were groundbreaking, highly talented guitar players; they influenced the future of music and of countless many artists in the decades that followed and up to the present day.

Most came from poor, rural backgrounds. Many were self-taught musicians, honing their skills during their childhood and teen years, oftentimes playing on homemade instruments. When they came of age, they migrated to the cities, played in the streets, in saloons, clubs and brothels and in churches.

Go down a list of early Black bluesmen and you’ll find that many of them were blind. Brett Bonner, editor of Living Blues magazine theorizes, “When you were a blind child in a poor family in the rural south you were a burden to the family because you couldn’t work on the farm like everyone else. Playing music was something a blind child could learn to do and could, as he aged, perhaps make a living doing it. Since they had to earn their keep and there were so few other possibilities available, they simply became bluesmen out of necessity.”

Gary Davis, born in 1896 in rural South Carolina lost his sight during his infancy. As Davis recounted, “I taken the sore eyes when I was three weeks old. And the doctors put something in my eyes cause ulcers to grow over my eyes and cause me to go blind.”

At the age of seven he fashioned a guitar from a pie pan. He would learn to play guitar, banjo and harmonica but he’s best known as a master of the guitar.

Lemon Jefferson was born on a farm in Couchman, Texas to sharecropper parents in the mid-1890s (sources differ as to the exact date of his birth). The cause of his blindness is not known.

By 1912, Jefferson was performing in Dallas and became a regular fixture on street corners in Dallas. In the mid-1920s he enjoyed a period of brief success recording for Paramount. Blind Lemon Jefferson was in his thirties when he died in 1929 of an apparent heart attack.

Called the Father of Texas Blues, Jefferson was credited by Sam “Lightnin'” Hopkins, T-Bone Walker, Bessie Smith, Louis Armstrong, Carl Perkins, the Jefferson Airplane, and the Beatles as having influenced their music.

Taken as a group the Black bluesman helped to form today’s music. Without them there wouldn’t have been The Beatles, The Rolling Stones, Eric Clapton, Stevie Ray Vaughn or Elvis Presley as we know them. The list of musicians influenced by the early blues is endless and continues to grow.

The recordings of these bluesmen are old and often sound scratchy, a feature that we might normally find distracting. Personally I find that the scratchy background lends an appropriate historical flavor.

There’s half a month left. Go out and celebrate Black History Month.