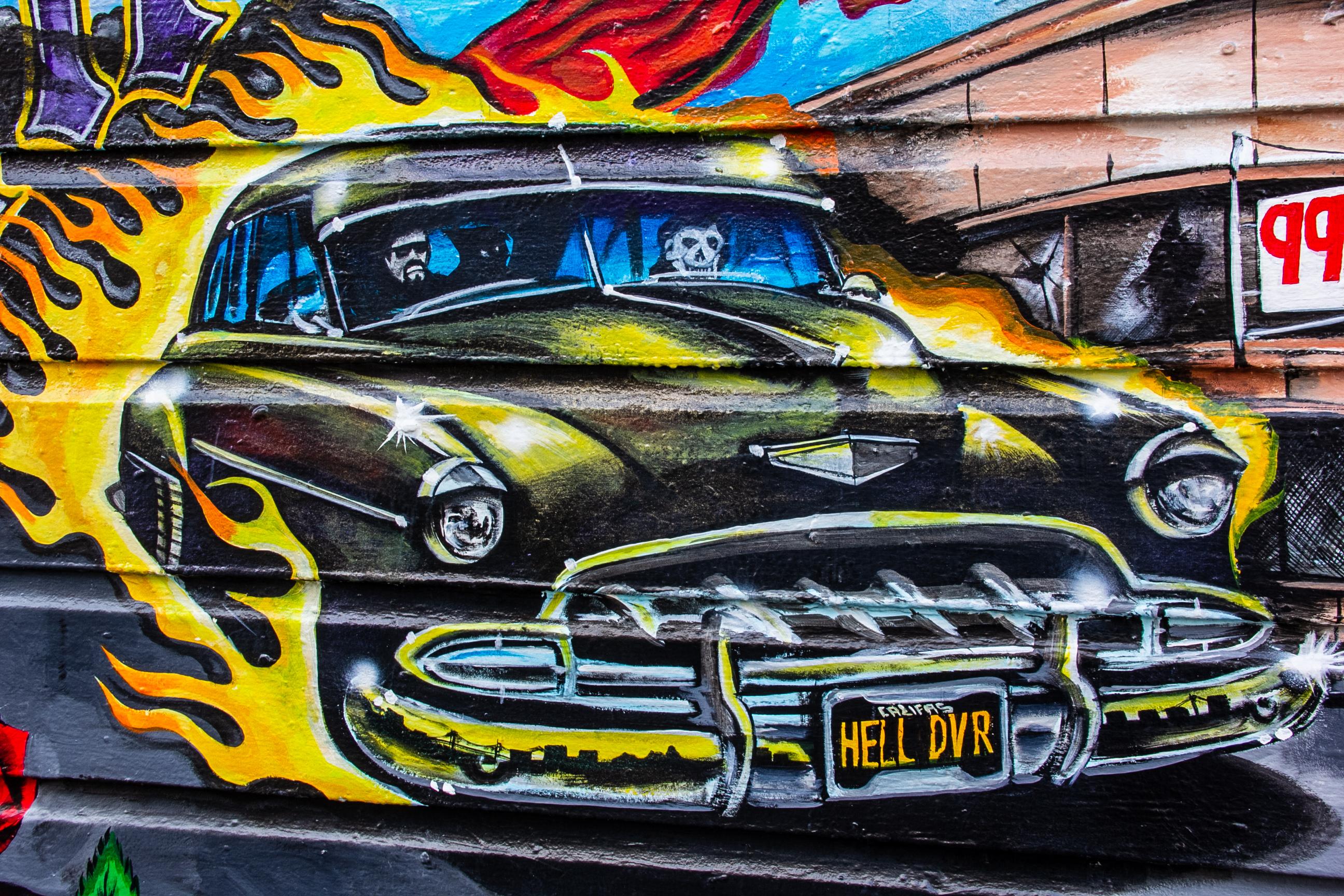 Taking a breath of viral free air to offer something pleasing and to try to relieve some of the angst if only for a few moments.  The San Francisco Bay Area is rich in street art; some of it sanctioned and some not. Below is a small sampling of images of a few of the many murals that grace the Bay Area.

For years the surf contest at Mavericks along the coast about 30 minutes south of San Francisco has captivated people around the world. The small section of coastline sees waves that are typically over 8 m (25 ft) and top out at over 18 m (60 ft). Unfortunately the contest has been cancelled for four straight years due to “logistical problems.”
But surfing is still king in the area.

On the side of the building that houses the Cunha Store (a great little general merchandise emporium) in Half Moon Bay is a mural of surfer Jeff Clark challenging a big wave at Mavericks.  Below: The mural actually covers two walls.

Just north of Half Moon Bay is the little town of Princeton and the Pillar Point Marina.  The sides of a utility box depict the local ocean life.

If you happen to find yourself near the Embarcadero at the intersection of Mission Street & Steuart Street, you’ll see three irregular free standing sections of steel, painted front and back. Dedicated in 1986, the mural depicts scenes of the San Francisco waterfront strike of 1934, and working conditions before and after the strike.
In May of 1934, the longshoremen working ports along the west coast went on strike. The strike turned violent when police officers shot at strikers at the site of the memorial. Two of the strikers died and a third was injured. The next day several thousand strikers and sympathizers took part in a procession that stretched for more than a mile and a half down Market Street. Bloody Thursday as it was called resulted in a general strike. The strike ended in July of the same year.

Each morning, under what was called the “shapeup,” workers lined up at the docks as private contractors chose whom they would employ that day, forcing men to beg for work and pay kickbacks to hiring agents

Mourning the dead of Bloody Thursday

Aftermath of the strike

San Francisco’s Mission District is best known as The City’s Latino District. It’s here that you can get some of the best Mexican food in the Bay Area. It’s the birthplace of the Mission burrito, that delightful eatable that according to who choose to believe was invented either at El Faro or Taqueria La Cumbre.  I’ve had the both the El Faro burrito and La Cumbre’s and I don’t care who invented it, because they are both heaven in a tortilla.
The Mission is also where you’ll find some of the most vivid and colorful murals in the Bay Area.  I’ve just barely tapped the riches of murals in the Mission with one short walk.  Going back is on my agenda but for now my schedule has been preempted by the star-crossed turn of events.

Elaine Chu and The Rebirth of Coyolxauhqui
During our walk through the Mission we were fortunate enough to come upon muralist Elaine Chu who put down her brush for a few moments to talk to us.  The art itself was just about complete.  She was putting the finishing touches on her work, applying a coating on the mural to make it graffiti proof.  That someone would despoil this work of art is an inconceivable sin.  Ms. Chu collaborated on this mural with her friend and fellow muralist Marina Perez- Wong.  Together they run a collaborative called Twin Walls Mural Company.  I’m looking forward to seeing more of their work.  For more on Twin Walls follow the link.

Silhouette of the artist at work

The Rebirth of Coyolxauhqui detail

The Rebirth of Coyolxauhqui detail

Stay tuned for more covid free zones in the hopefully not too many weeks to come.

Stay safe and for those who can stay home.