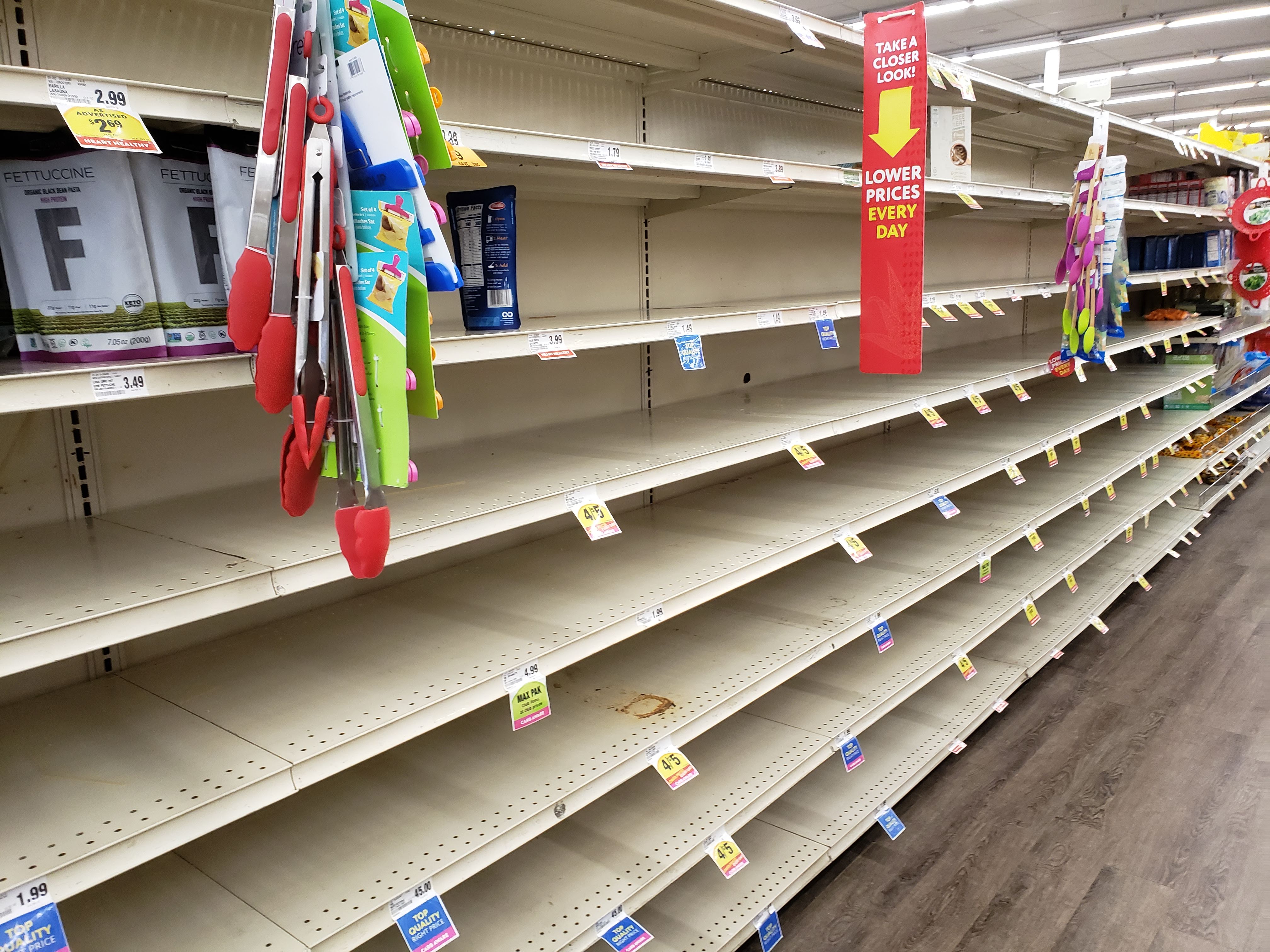 I’m up before dawn on a 50° F. morning; chilly for the Bay Area, balmy for those struggling with a side order of snow to go with their pandemic.  Wife, daughter and grandchildren are enjoying the warmth of bed.  Lexi bounces up, all tail wagging, rolling on the floor, butt in the air doggy excitement. It’s her we’re going to have an outing dance.
“Sorry girl, I’ve got to go hunting.”
It’s not hunting in the traditional sense.  This doesn’t require a gun.  Not yet anyway, but as Samuel L. Jackson famously said in Jurassic Park, “Hold onto your butts.”  It’s discomforting to contemplate our little bit of leftover reason giving way to intimidation at gunpoint for a couple cans of Spam.
Look at the clock, 5:30, running behind.  Throw on some clothes, grab some disinfectant and out the door.  A glance back at Lexi, giving me the “what about me,” look.
“I’ll be back, girl. Go back to bed.”

At Foodmaxx in Pinole there’s a small knot of people with their shopping carts waiting for the doors to open.  I’m pleasantly surprised that I haven’t been greeted with a line. The talk this morning is about the morning’s primary quarry – toilet paper.  One poor fellow is down to just a couple rolls and his tone carries more than a little hint of desperation.  Toilet paper jokes circulate around our little group; mentions of orphan socks, leaves and stinging nettles.

The door opens and everyone is deferential.  It’s not like we were in a line but the politeness and lack of rudeness is a nice way to start the day.  The burly guy who opened the door has seen reruns of this show and announces right off,
“We are out of paper products. No paper products.”
“Fuck me.”

Half of the group heads into the store to stalk other game while I abandon my cart and head for the door with the other half.  Off to the next hunting ground. On my way to the car I spray my hands again with homemade disinfectant and mull my choices; Lucky just about a half mile up the road or Safeway about ten minutes down the interstate. Shopping for the basics has become something like spinning a roulette wheel.

What used to be one trip to a single store has become a multi-stop scavenger hunt for Lysol, Clorox Wipes, Purell, and other cleaning supplies; meat, frozen foods and dairy.  The aisles that carry bread, pasta, pasta sauce, canned meats, beans and vegetables have become a wilderness; a good opportunity to wipe down the barren shelves.  Paper towels, face tissue and of course the sine qua non, toilet paper have become the supermarket version of the unicorn.  I don’t even bother with the wipes or the hand sanitizer.

Below it looks like $3.13 for air or as that classic rock song goes, Money for Nothing.

Safeway turns out to be the wrong choice.  They won’t open for another 45 minutes.  I peek through the glass doors to see if I can see toilet paper but that section isn’t visible.  I could wait but that’s 45 minutes wasted; 45 minutes which could be better spent actually scouring an open store.  Back to the Lucky in Pinole.  If they’re broke I can always double back to the Safeway.

Entering Lucky I see that there are people pushing carts that have the coveted TP.  The tissue aisle is picked clean but for one pack that a guy has just scored.  He looks up, see’s my disappointment.
“They have more in the back that they haven’t brought up yet.”

Just outside the stockroom is a pallet and on the bottom of the stack are cases of toilet paper.  Success. Just be patient and wait.  I and a couple others stand near the pallet. We’re like wolves protecting the downed quarry.  One of the warehouse guys, a Filipino man with about 3 teeth in his head tells us,
“Toilet paper at the front of the store near checkout.”

It’s like a starting gun and we’re off for the front.  Once at the front I see a store employee acting as TP security next to a stack of toilet paper.  She admonishes each customer that the limit is one pack per customer.  That’s fine by me.  It’s all I’d planned on getting anyway.  I feel like I’ve just won the lottery.

With TP safely in my cart I head to the meat section.  All I need; NEED being the operative word, is one pack of pork chops.  I score the chops and figuring that two for two is a victory I decide not to press my luck looking for other staples.

On my way to the checkout I see people with shopping carts that are bursting with meat, frozen food, pasta, canned goods and all the other items that one amasses in preparation for the apocalypse.  No dairy in those carts.  The dairy section is bare.  Farmers must be putting the whip to hens and dairy cattle.
“Best start producing. Any laggards are going to find themselves in a roasting pan.”
Those brimming carts aren’t something you normally see at 6:30 in the morning but then normalcy has been turned on its head.

In some regard I get it.  Not the six month hoarding.  I’ll never understand that but I guess there is some rationale for getting a little more than you normally would.  That’s one less trip from the house and one less possible exposure to the corona creepy crawler
A little forbearance and forethought and a pandemic of reason could go a long way though.  We’re supposed to be the UNITED States and we certainly could use a touch more unity, from top to bottom and bottom to top.

About the time that scarcity sunk in we scoured the house for treasures.  Cora had one small purse pack of Clorox wipes that we now use to clean our cell phones.  We tear off little sections of one of the little wipes, tuck the remainder of the wipe in the pack and seal the pack well.

She also found a purse sized dispenser of Purell from when she was on chemo.  Her plan was to keep it in the car but I warned her to keep it out of sight in the glove compartment.  Extreme?  Maybe, but people commit smash and grabs for the most insignificant items and these days there’s nothing insignificant about a few ounces of Purell.

Over a week ago I made a batch of alcohol based sanitizer using isopropyl alcohol, water, and a pinch of hydrogen peroxide.  It has to be at least 60% alcohol but I fortified it with a smidge more than the formula calls for.  We only had a half bottle of alcohol in the house and alcohol is another precious commodity that’s been AWOL from store shelves for weeks.

Jessica found alcohol on Amazon.  It comes in cases of six so we’re set for months, if not years.  After using our homegrown sanitizer multiple times a day my hands have the texture of dried manzanita and that paper cut on my finger kicks up a fuss every time I spray my hands.  Jess also found some little spray bottles which are perfect for purse or pocket.

A couple of afternoons ago I saw the neighbors across the street.
“You guys doing okay?”
“Yes, fine thank you.”
“Do you have hand sanitizer?”
It’s the one thing they didn’t have so I made up a batch for them.

Jessica’s ex, a firefighter hasn’t been able to find bread.  He’s on his four day shift now but when he gets off and picks up the kids he’ll have a loaf of bread.  I found some during one of my early morning foraging runs.

Right now the drill is that as soon as we use something we replace it.  Cora’s busy making chicken for dinner so the next trip to the store will require me to get chicken.  No, not enough to last us into June, or even April for that matter.  Just replace what we used.

Grocery trips have a new routine now
Up at 5, wash hands, get dressed, grab the grocery bags and play the, which store to try first lottery.
Put on my latex gloves, spray the cart handle and join the little huddle of people, (actually a spread out group of a few socially distanced people) and wait for the doors to open.  This isn’t like the out of control Costco lines that snake through the parking lot. There are some things that I just won’t do and falling in line with a couple hundred other people is one of them.
Once inside the store I go straight for the items that we need the most and then backtrack for the incidentals.
The checkout lines fill quickly so I usually go to the self check which is 15 items or less. Might as well, even if there were 16 items on my list I never find anywhere near 15 items that we NEED.  Oh I could fill the cart like others do but I’m not playing that game.  In the past I would eschew the self-check because I don’t like business practices that are designed to put people out of work.  Right now though it’s become a different story as the grocery stores are begging for help.  I’d considered applying for a job but we’ve been getting by fine on our Social Security and there are people out there who actually NEED the work.
I’ve gotten into the habit of paying with a credit card since that doesn’t require me to actually touch the transaction pad.
Get my card back, wipe it down with a homemade wipe of a napkin sprayed with alcohol.  Back to the car, load the groceries, spray the gloves, remove the gloves, spray my now dessicated hands and head home or for another store if necessary.

It’s a ridiculous ritual made necessary by the people who completely went bat shit crazy, buying enough groceries and supplies to start their own convenience stores. When this whole mess started I refused to get caught up in the bizarre free for all and I still refuse. We have neighbors who I’m certain will share as will I.

We’re in a time when you savor the victories, be it the last bottle of Purell or the little moral victories.  Early last week at the Lucky store a woman with her cart and I with mine approached each other from opposite ends of a barren aisle.  My cart was a forsaken hollow but her’s was quite another matter.  She must have had a dozen frozen pizzas, a stack of other frozen foods, many dozens of eggs, enough Spam to satisfy the state of Hawaii, gallons of milk and god knows what else heaped into a cart that, were it able to talk, would have objected strenuously to the burden the woman had placed upon it. For a few precious seconds we locked eyes.  I glanced down at her cart and back at her and arched an eyebrow.  She looked at me, actually abashed, as if I’d caught her picking her nose and eating the booger.  I didn’t get many groceries that day but I managed to hoard enough satisfaction to last me a day or two.

14 thoughts on “The Covid Chronicles – Foraging”