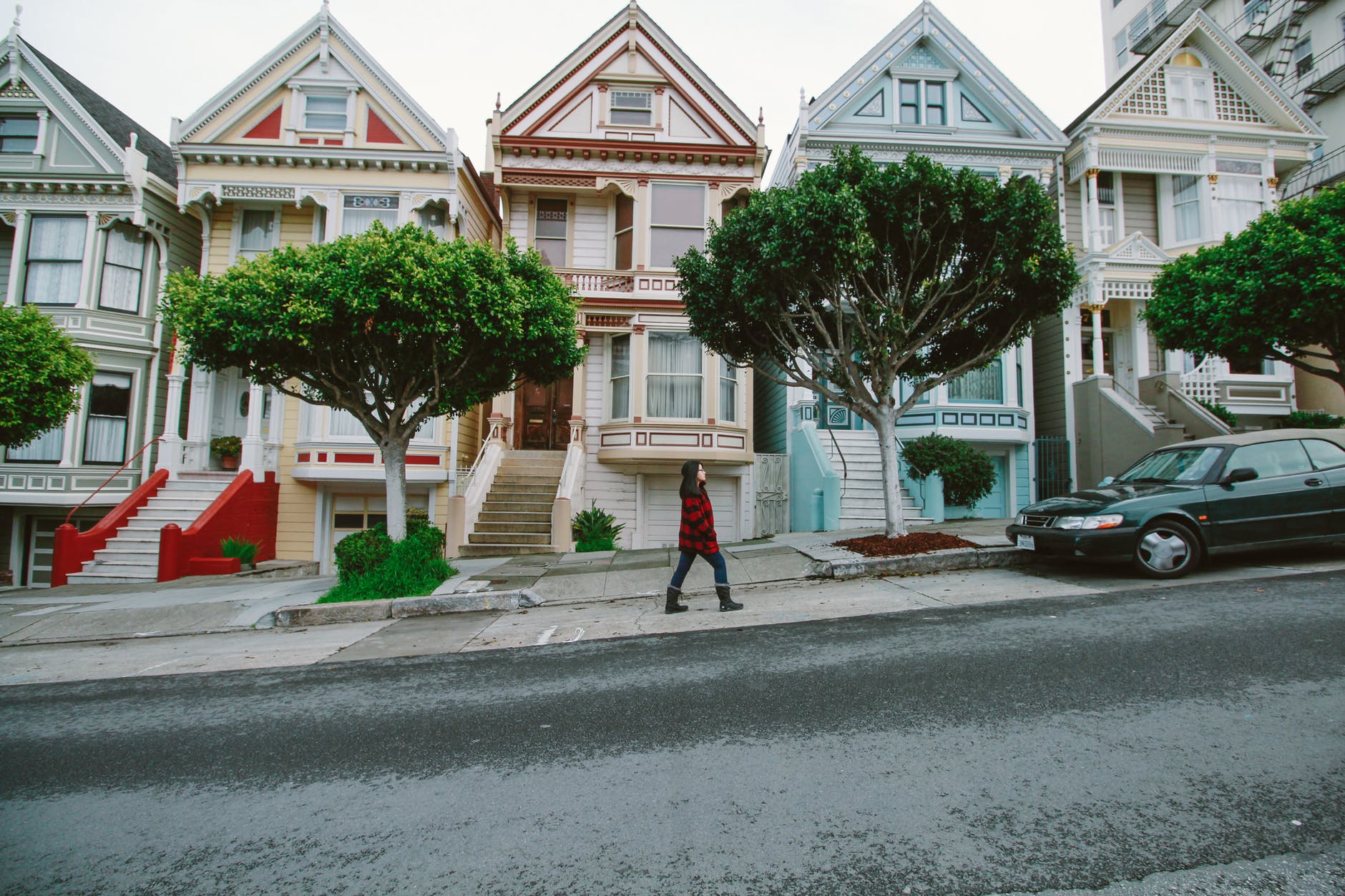 It was nearly a year ago, March in fact, that I wrote a piece in which I described my love/hate relationship with San Francisco.  At the time The City and I were back on good terms.  It was just after the Chinese New Year celebration when Cora and I had spent some afternoons enjoying the festive atmosphere.  Chinatown is one of my favorite places in The City, not for cheap trinkets or for schmoozing with the multitudes of tourists but for the food, walks through historic alleys and the general feel of the place.  And then there’s a long ago personal history that I have with Chinatown, back before I was married.

Now, ten months later, I find myself revisiting the whole notion of love and hate in San Francisco.  Not because we’ve had another falling out; things have been just ducky between us.  It’s a movie, The Last Black Man in San Francisco that’s sent me back to rehash that old piece and review my fickle relationship with The City.

The Last Black Man in San Francisco is a hybrid of drama and real life but then that description can mean almost nothing.  How many times have I seen a World War II movie that opens with the credit, “Based on true events,” and then come away feeling like the only true event that the movie recalled was a big war in which a lot of people got killed.

The details of what is true and not true in The Last Black Man, are unimportant to this piece. The story revolves around a young black man, Jimmie Fails (played by Jimmie Fails) and his good friend Montgomery Allen ( Jonathan Majors).  The two men share cramped quarters in a single garage turned bedroom in San Francisco’s Bayview-Hunter’s Point District.  The district, the poorest and most neglected of The City’s neighborhoods is geographically isolated from the rest of  San Francisco and located near the old Hunter’s Point Naval Shipyard which the Navy abandoned in 1974.  As a not so friendly parting gift The Navy left The City and its residents with a toxic dump, something that is not lost on the angry residents of the area.

The two men, particularly Fails, see the garage and the blighted neighborhood as temporary digs until they can move into Fails’ old family home, a stately wood panelled Victorian located in San Francisco’s Fillmore District; a section of town which during and after World War II became a largely African American district (the home that was used for the shoot actually sits on South Van Ness Avenue in a district called SOMA ).

Early in the movie the two men periodically show up at the house to make minor repairs, touch up the paint and envision what Fails sees as their future in the old home.  All this is to the chagrin of the white couple who occupy the house.  It’s the twenty first century and money and gentrification are pushing the original residents out and the Fillmore is starting to take on a distinctly WASPish flavor.

Further into the film the white couple is forced to move out and the home, left vacant, is ripe for the two men to become squatters.  Jimmie’s plan is to establish his residence in the home and take possession but the plan hits a snag when the home is put up for sale.  Fails visits a real estate agent who informs him that the house is worth seven figures, about 6 figures more than Jimmie can lay his hands on.

The film is rife with nuance.  It’s able to deliver a message without hitting the viewer across the face with it. The closest that we come to a villain is the real estate agent who takes on the role of metaphor for all that’s going wrong with The City.  Without a mention we know that the evil geniuses are the tech companies, the techies and the investors who trade real estate like kids trade baseball cards.  Free of flashbacks the film delivers a sobering dose of nostalgia without being maudlin.

For me there was one striking scene in the movie.

Towards the end, when things have not turned out well, Jimmie finds himself seated in a Muni bus next to a pair of millennial women, clearly transplants (probably from L.A.) who are dissing San Francisco.
“I’ve been saying for months, let’s just move to East LA. This city is dead,”
“Seriously, fuck this city.”
Jimmie interrupts “‘Scuse me? You don’t get to hate San Francisco.”
Jimmie and one of the women spar a bit before Jimmie plunges the dagger,
“You don’t get to hate it unless you love it.”

It’s the most memorable line of the movie and Jimmie delivers it at his own lowest point; a point when hate should be trumping love.  He’s been spurned by the city that he loves yet there he sits, chivalrously defending San Francisco’s honor against the two outsiders who would besmirch it.

That line is the essence of the film and the moment it was delivered I was struck by it’s personal significance.  It was as if the filmmaker had pulled that line from somewhere in my soul and the souls of those who live or have lived in San Francisco and lament all of the changes.

San Francisco can be dirty, depressing, crowded and hectic.  But what city isn’t?  For every fault, every wart and flaw I still find myself drawn to The City by all of the beauty and vibrance and diversity and cosmopolitan flair and downright quirkiness.  I even love the middle finger that The City waves at Trump and his lackeys on an almost daily basis.

When I was younger I feared San Francisco; feared it for being different, for being an unknown, for it’s crowds and indeed for the diversity that couldn’t be found in the suburban hills of San Mateo.  And then I worked and lived in The City and it wasn’t long before I fell in love.  I was first smitten at a place where I worked, Downtown, a little patch of The City that I call the confluence.  Soon I became comfortable and had no qualms about going anywhere in The City and I mean anywhere and sometimes it might have been with a lack of good judgement.

The Last Black Man is indeed an adaptation of Fail’s real life experience but in the larger sense it’s a story that laments the gentrification of San Francisco with a subtlety that keeps the movie from becoming a blatant shriek of protest.

Yes there are those times when I hate San Francisco but I get to hate it because I have loved it.  That periodic hate is not for the city itself but for the people who are ruining it.  The tech companies, the investors and their camp followers, the newly monied. They make the hollow claim that they want to protect the diversity of San Francisco but in reality they don’t care a fig about the collateral damage they’re causing.  It’s capitalism run amok and those who are supposed to be in charge, The City’s caretakers, are failing it. They publically bemoan the gentrification and the stratospheric cost of living yet all the while they seem to be giving a nod and a wink to those interests who are bankrupting San Francisco’s cultural richness.

Gentrification is killing the city’s diverse flavor.  Certainly The City welcomes people of all races, cultures, orientations and religions but more and more they’re welcome as visitors only.  As gentrification continues the neighborhoods are losing the ethnic identities that have given The City it’s diverse, worldly fame.

A few years ago I tried to divorce The City.  I’d had enough; enough of crowds, enough of traffic, enough of all of it.  I hated San Francisco as much as I’d once loved it. But The City doesn’t beckon us back; we simply waiver and then cave.  And so a few short months later I’d fallen in love again.  That’s how it goes.  It’s love/hate/love.  The City makes two timers of us. Truth is that while I talk longingly of moving to the mountains of Montana I’d rather move back to San Francisco and I’d do it in a heartbeat if I could afford it and I would go all in and move to Downtown.

I used to live in the Sunset District and then the Outer Richmond District, neighborhoods on The City’s western edge, near the ocean and far removed from Downtown.  They’re pleasant neighborhoods but they’re what I would call “urban light.”  They bear more resemblance to the suburbs than they do a city.  I rarely visit those areas unless I have a specific place in mind to visit or I want to wax nostalgic on my days living there.   Unless I have pressing business in one of those areas I head downtown . When I visit San Francisco I’m not looking for pleasant, I’m on the hunt for San Francisco’s passion, excitement and vigor.

It’s that downtown confluence that pulls me. The place that stole my heart and continues to captivate me. It captures the essence of The City, an essence that’s in danger of being wafted away by the winds of greed and gentrification.

Next up: The confluence.

19 thoughts on “My San Francisco: You Don’t Get To Hate It…”