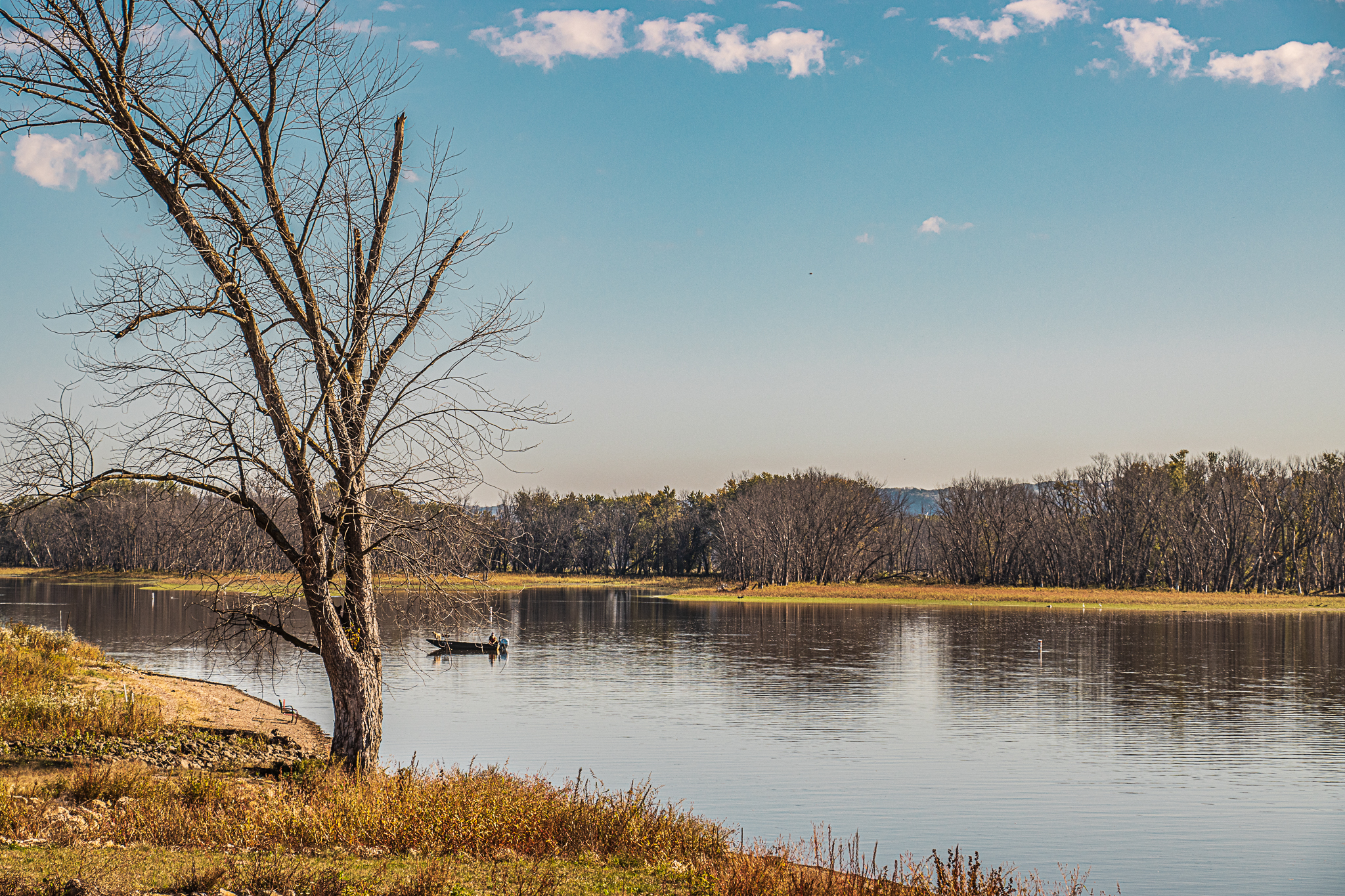 A chapter in an occasional series of posts documenting an autumn 2021 road trip through the Midwest.  This post is a continuation of the post, A Coffee Shop Morning: Chewing on Life

September 23rd, 2021, driving southbound in Eastern Iowa. Off to my left is the Mississippi River and somewhere deep in the river bottom is an imaginary line, the boundary between Iowa and the Badger State, Wisconsin.

I’m on U.S 52, a winding highway that puts the lie to the notion that Iowa is tedium; flat as old beer, and with as much pizzazz as soggy white bread. The story has it that the Hawkeye State is nothing but cornfields and hicks, and if you took out the grain elevators, barns, silos and homey farmhouses, the whole thing would be featureless. That’s the version pushed by high brows on the right and left coasts.

From my motel in Lansing to the Field of Dreams baseball park in Dyersville, it’s a seventy-two mile drive, most of it snuggled up to the big river’s western shore. This seventy two miles is a mere hyphen in America’s longest scenic byway, the Great River Road. The complete journey begins at Itasca State Park in Minnesota, and ends three thousand miles later at the Gulf of Mexico, passing through ten states while following the course of the most celebrated of America’s grand rivers.

I’m passing all the usual suspects, the cornfields, the grain elevators, the barns, silos and homey little farm houses. I’m also passing wetlands and hardwood forests. A spooked deer races along the road and then darts into the safety of the woods. Above the river, raptors navigate aerial tides, gliding and hovering, looking to spot a random creature, unaware it’s about to become a mid-morning snack.

Occasional roadside stands offer fresh fruits, vegetables, eggs and preserves. Want a dozen ears of corn? Here’s a place that offers corn at a dozen ears for one buck.  At that price I have to wonder if it’s a business, a hobby, or just getting rid of the excess.

Even vehicular traffic is rural. I’m as likely to see a tractor or some other John Deere farm contraption rolling down the road, as I would a family sedan or the ubiquitous pickup. Pickups are everywhere here and in most instances as necessary as a tiller and a bag of seed. It isn’t like back home where some accountant owns an eight cylinder behemoth in order to haul his fantasies of manhood and a few sacks of groceries.

This is all a quilt, sewn from patches of nature’s beauty and America’s rural charm.

Rounding a bend, I get to the top of a rise, a large parking lot and a scenic viewpoint. It’s a good place to stop, rest and take in the view. At the edge of the highway a woman sits at a table stacked high with jars. She’s selling honey. In another section of the lot, over near the edge of the overlook, a man sells jars of preserves.

I’d like to buy some of one or both but I doubt that I’ll have use for either during this trip, and Cora has commanded me not to bring foodstuffs home, even if they were homemade in a Midwest farm kitchen.

From the overlook I gaze down on the big river, a blue undulation that swirls between green forested banks that are highlighted by bright golden grasses. The river winds around islands and I immediately think of the island hideout of Huck Finn and Jim, in Mark Twain’s, The Adventures of Huckleberry Finn. Occasionally I spot a powerful towboat pushing a cluster of barges upriver.

The whole area below me and for miles up and down the river is part of the Upper Mississippi River National Wildlife and Fish Refuge.

Twenty minutes out of Lansing and I park near a boat launching ramp in Harpers Ferry, a small riverside town of 262. Standing near the ramp I see small aluminum fishing boats hunkered close to the shoreline. A sputtering boat engine and the hushed conversations of fishermen, broken by occasional laughter, are broadcast on the water upstream and down and mix with nature’s concert of shore birds and the lapping waters.

It’s serene here, reminiscent of a Benton painting, a place where, with my back turned to the 21st century, I might be gazing at a quiet day on Twain’s Mississippi of the 1880’s.

It’s a place where you can literally breathe in the Americana.

Before pushing on, my attention turns to a tall pole sticking out of the shallows near the shoreline. I walk over and see that the pole is a marker graduated in feet. Next to some of the graduations are dates. This marker is, in its own simple way, a ledger of history, a record of the dates when this usually peaceful and beneficent river turned hostile.

The marker tells, in the briefest terms, five tales of destruction, dates when the Mississippi crested its banks. In 1993, the bottommost date, the river crested at just under 29 feet. In 1965, the top date, she crested at a staggering 33 feet.

The marker is blunt and to the point, not bothering with pesky details. It’s only here to tell passersby that on these dates something bad happened here.

The flood of April,1965, had its origins hundreds of miles to the north, in Wisconsin and Minnesota. It was spawned months earlier on Thanksgiving weekend of 1964, when a freeze, colder than the region’s normally frigid temperatures, struck those northern states. The freeze would continue into the Christmas holidays.

At the same time, both states received unusually low snow levels. The prolonged cold and lowered snowpack conspired to forge an abnormally deep frost, an icy underground menace secreted from an unwary populace which went about its usual holiday gaiety.

Beginning in March, the region saw a series of powerful winter storms which produced heavier than normal snow levels for that time of year. At the same time, continued cold weather prevented a normal, gradual snowmelt and runoff.

On April 1st, the disaster was kicked into motion when a series of rainstorms produced up to 3.5 inches of rain which melted the swollen snowpack. With the ground still frozen, the rain and snowmelt had no place to go except the creeks, streams and rivers and finally the Mississippi itself.

This confluence of conditions led to record flooding along the Mississippi from 100 miles north of Minneapolis, Minnesota, all the way to Hannibal, Missouri, a total distance of nearly half the length of the river.

Up and down the river, cities and towns were faced with a river rising to record levels.

Forty miles further south in Clinton, Iowa, Dennis Duerling was a senior at the local high school.
“I remember having a big assembly at Clinton High School before anything hit and Capt. Loehndorf saying, ‘We need you kids to save the town.’ We would fill sandbags during PE class between Coan and the north field. There was sand on the street…. I worked as a stock boy at Kline’s and I can remember filling sandbags at Kline’s with the manager on Easter Sunday… I remember it raining out and filling sandbags and it wasn’t fun…”

I was eleven years old and living in the San Francisco Bay Area when the Mississippi turned angry that year. While I was enjoying the beginnings of spring, playing basketball on the courts of the local junior college and looking forward to Easter break, kids along the raging Mississippi, kids my age, were stuffing sandbags. While my parents watched the news and clucked about the folly of living on a riverbank, parents and grandparents on the flood plain were busy building dikes, trying to save their homes and possessions.

It was nearly mid-May when the Mississippi finally receded to below flood stage.

The crests of April 1965, continue to stand as the highest ever recorded at many of the Mississippi’s gauge sites.

My drive continues south through the town of McGregor which experienced a cycle not unlike many in small town America. It began with a settler who filled a need, which led to a town, which led to growth, more needs filled, more growth, a booming economy and thriving population.

Meanwhile, out in the big cities, innovation begat innovation, and innovation also begat obsolescence and unemployment, and it was just a matter of a short time for modernization to migrate to towns that were still doing things the old way.

For some, the railroad companies bypassed or closed depots and stations or abandoned routes altogether. Other towns found that the highways that once brought commerce and tourism were bypassed by superhighways miles distant. Caught unawares behind progress, abandoned by business and stripped of commerce these small towns were forced to either adapt and repurpose, founder in loneliness, or simply perish altogether. It didn’t take long for boom to bust.

In 1837, second generation American, Alexander McGregor established a ferry boat landing across the Mississippi from the trading center at Prairie du Chien, Wisconsin. He named the little enterprise, McGregor’s Landing,

Twenty years later, with a population of 220, the settlement was incorporated under the name McGregor. And why not, old man McGregor put in most of the planning if not the heavy lifting.

About that time, the town became a railroad hub. Trains coming from the east or headed back from the west were disassembled in McGregor, ferried across the river and reconstituted to make their way to points further on up the lines.

In the early 1870’s, McGregor served the steamboat trade, sending goods that included wheat, barley, oats, corn and hogs up and down the river.

The steamboat trade was a short-lived boom, brought to an end with the improvement of roads and more dependence on the railroads. In 1874 the construction of a railroad bridge ended the business of ferrying disassembled trains across the river.

In 1932 a suspension bridge put an end to the need for a ferryboat system. A town with a population that one time peaked at over five thousand had begun its decline.

Now, with a population of 742, McGregor has remade itself from an industrial/transportation center to a town that relies on Midwest small town charm, historic buildings, and a main drag of antique and curio shops that attract the tourist trade.

Gutenberg. Twenty-five miles to go and the big river and I are parting ways. Highway 52 continues due south while the Mississippi courses off to the southeast, to Dubuque, and eventually to New Orleans and the Gulf.

Dyersville’s unofficial beginning was as a settlement of forty-two immigrants from Bavaria, ten families, who settled in the Maquoketa Valley in 1846. A year later James Dyer arrived, followed by family and acquaintances from Somersetshire, England.

Dyer, wasting no time, established a town in February of 1849 and not bothering to stand on ceremony, christened his new burg, Dyersville.

Damn near every town has an attraction of some sort. In Austin, Minnesota it’s the Spam Museum. In Oatman, Arizona it’s wild burros, and in Catoosa, Oklahoma, it’s a grinning blue concrete whale.

When I decided to visit Dyersville it wasn’t to visit it’s National Farm Toy Museum, though the thought did occur to me.

No, I visited Dyersville to see a cornfield.

Seventy two miles to visit a cornfield in a state where you can’t drive two minutes and not see acre upon acre of corn? Shit man, you couldn’t throw a stone or swing a cat anywhere in this state without hitting a corn stalk and you drove all fucking day for a cornfield?

Walking off towards centerfield, Shoeless Joe turns back towards Ray and pauses
“Hey,” he calls. “Is this heaven?”
Ray smiles and in an almost confused tone responds, “No. It’s Iowa.”

Continued in the post, Dyersville, Iowa: “Wanna Have a Catch?”