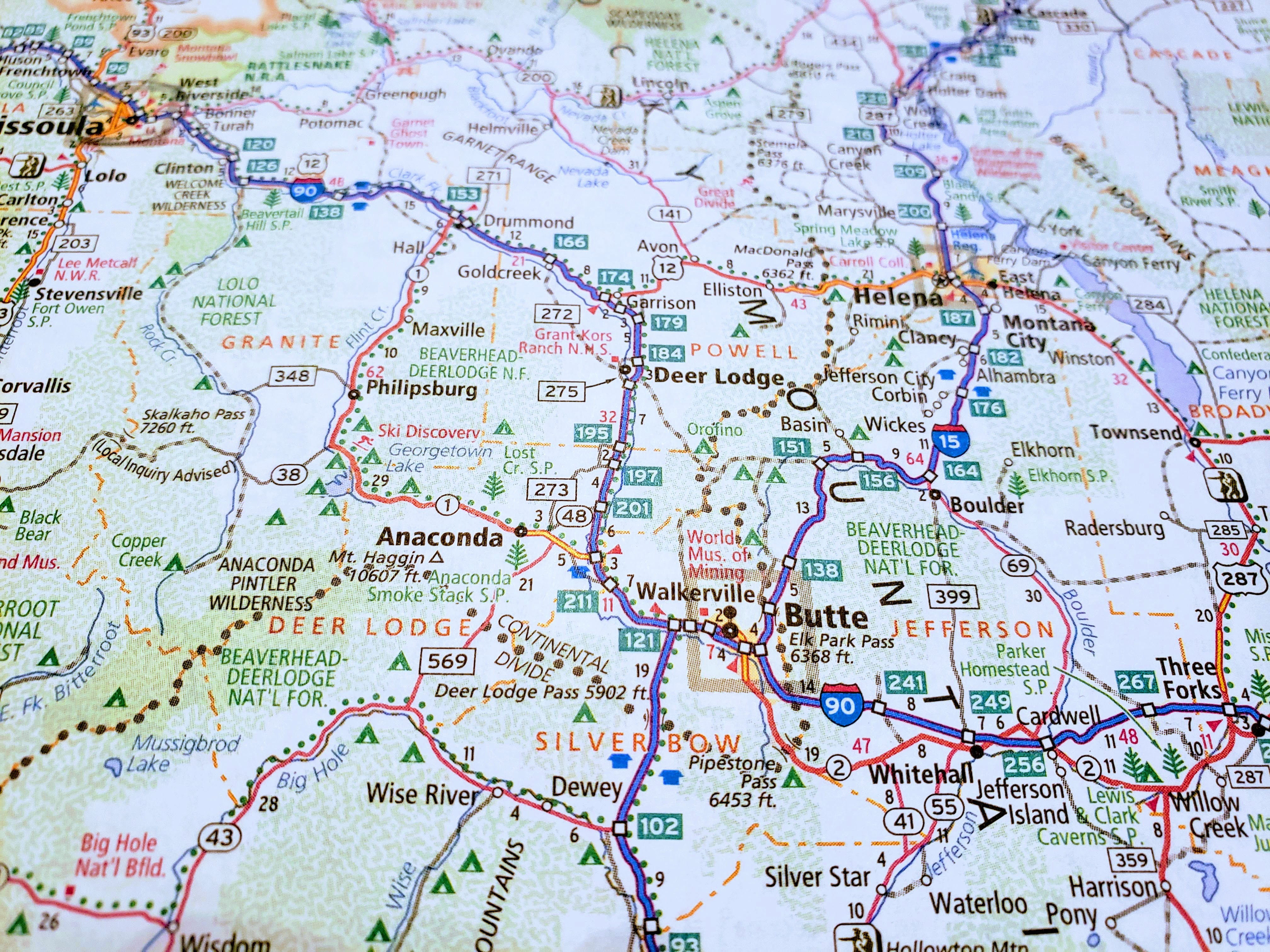 Post-It notes, travel guides, an oversized Rand-McNally Road Atlas, assorted other maps, pens, pencils, a highlighter, notepads and a couple of spiral notebooks; my current life in a nutshell, all of it scattered about, on a little desk, a printer stand, the dining table and, to the wife’s displeasure, the surrounding floor.

We started planning this trip over a month ago and it’s not unlike Christmas; one day it’s Thanksgiving and the next thing you know tomorrow’s Christmas Eve and you haven’t bought a damn thing.

In just two days I pick up a rental, a minivan. The rental is because I don’t feel like putting 4800 miles on one of our cars. And 4800 is a conservative estimate. Normally I might just rent a midsize car. The van is for the dog’s comfort. Lexi will be able to stretch out on her dog bed surrounded by luggage, a cooler, my photo gear and all of our other possibles.

Two years ago I wouldn’t have done the rental thing. Two years ago I still had my pearl blue, Dodge Challenger SRT with a 396 Hemi. Sure, the insurance on that car was steep, and 500 horses sucked up premium gas like a disorderly lush, but it was fun to drive and it was just made for a road trip like this. Then again I’d have to wonder; is driving a muscle car with California plates in the South, a state trooper magnet?

Yesterday was a day of checking and double checking our reservations, looking for mistakes that are easier fixed in my living room rather than at a motel desk. A week ago a quick audit revealed that I’d booked the same night at two different motels, in two different towns, and completely omitted one stop. Two phone calls fixed that.

Normally I would make reservations online and a few moments later receive an email confirmation, but since Lexi is travelling I made my reservations by phone. I wanna hear the reservations clerk tell me that the motel allows dogs over 50 pounds and yes, he’s reserved for me, one of the rooms set aside for guests with pets.

As I compared emails to my calendar I noticed that I was missing two confirmation emails, and to compound the problem I hadn’t written down a few basic details, like the names of the two motels. I knew I’d made reservations for each stop but I didn’t know the names of the motels in Klamath Falls, Oregon and Ritzville (Yes Ritzville is a real town, and it’s in Washington State, but I couldn’t say whether or not the citizens have all gone crackers).

I scoured notes, Post-Its, scraps of paper, dog eared travel guides and calendars and found dozens of motel names in dozens of towns and cities, but nothing that told me where we would be laying our heads down in Ritzville and Klamath Falls.
“Fuck me.”

There are times, like when some guy from Russia wants to offer me 0% interest on my Visa, that a cell phone is a pain in the ass. There are other times when a cell phone can be the greatest invention since bologna and mustard on white bread.

After tapping in the area codes for Klamath Falls and Ritzville the phone numbers for the mystery motels appeared on my screen. Two phone calls later I had my last two confirmation numbers.
“Thank you Mister Android.”

It’s been a week of errands.

Restock the first aid kit for the car, get an extra memory card for the camera, a new haze filter for the 600mm lens, and extra poop bags for the, well, poop.

At Petsmart I dropped $35.00 dollars for booties for Lexi so that her feet won’t get burned on a broiling Southwest pavement. Thirty-five dollars? I wondered, “Is Nike making dog shoes now?” For $35.00 dollars these dog booties oughta have Steph Curry’s autograph. Steph Furry?  Nope. Just turns out that when you buy dog booties, you end up taking it in the booty.

We’re in the year of COVID and, even though the virus seems to be losing momentum, retreating in fact, the coronavirus has been our main concern since the day I proposed this journey.

It was COVID that drove some initial itinerary considerations. From the start we took indoor dining and any visitor centers or museums that might be open off the itinerary. These considerations prompted the decision to bring Lexi. If we’re not doing indoor things, then let’s just bring her with us.

And then there’s the giant issue of face coverings; the issue which never should have been an issue at all, but has been a source of contention and hostility, everywhere from the local mom and pop store to the Senate Chamber. I’ve been wearing a mask at all indoor locations, in crowded outdoor areas and even as a courtesy when passing others on the recreation paths. This is California and the mask thing is what you do.

We realized that we’re going to be travelling in, well, let’s put the rat on the table, red states, where wearing a mask might attract anything from a stink eye to a ration of verbal shit.

That was then. Just two days ago the CDC relaxed its guidelines and increased the chances of being heckled for wearing a mask. According to the CDC website, “Fully vaccinated people can resume activities without wearing a mask or physically distancing, except where required by federal, state, local, tribal, or territorial laws, rules, and regulations, including local business and workplace guidance.”

This could be a topic for a whole other post, but the short version is that it forces those of us who have been doing the right thing for a year, and have been vaccinated, to trust the nuts and the fools; the ones who get there medical advice from Hannity and who have no intention of getting vaccinated but will dump their masks nonetheless – if they’ve been wearing them at all. Click here for the Washington Post’s take on what a conundrum the new guidelines have created.

I suppose that we’ll just proceed on a case by case basis. In any event, this hasn’t rescinded Lexi’s invitation. I can’t leave my dog for four weeks even if she would be in my daughter’s capable care.

We’re a couple days out now. The spreadsheet, populated with the itinerary, the reservation numbers, the must see places and the can’t miss restaurants is about done. There’s a bin in the garage that’s filled with things necessary and needless.

I’ve always left for one of these things confident that something, either comical or serious, will go sideways.

I’ve been doing the travel planning bit for over forty years. Some trips have been problem free, but there have been the misfires.

There was the flat tire 20 miles into nowhere, in Montana on my wife’s all wheel drive Subaru. The little garage in Gardiner, Montana was able to fix the tire but there was that moment of pause when I feared that I would have to count on the little shop to have the correct size tire.

There was the Motel 6 with bedroom doors that closed with the ominous, booming CHOONK of a dungeon. Deep into the wee hours the doors boomed, a sound that seemed to announce another poor soul relegated to solitary. Or worse, a Motel 6 bedroom.

And then there was Murphy’s Law in Murphys California.
Before I was married my then girlfriend, Linda, and I took a weekend trip to California’s Gold Country. To get the full 19th century experience, we reserved a room at the historic old Murphys Hotel, a two story inn that first opened for business in 1856.

During its salad days The Murphys played host to some notable guests, including Mark Twain, John Jacob Astor, J.P. Morgan, and former President Ulysses S. Grant. The innkeepers named the historic rooms after their famous guests.

I can’t recall which bigwig’s room I selected, probably Mark Twain, but it was during the first night in our room that we were reminded of the old admonishment about the importance of, “Location, location, location.” The location, location of our room was directly above the saloon which on a weekend night hosted music and a lively crowd. But it wasn’t the noise from below, that posed a problem.

There must be a manual for owners of historic hotels which mandates that a historic inn has to sound old and creaky. The stairs must announce, with the hoary voice of vintage wood, the ascent or descent of a guest.

The floor in our room spoke with that compulsory old groan. Not so much the bed, which creaked only a little bit when we sat on it. However, when used for the customary purpose other than sleep, the old bed howled. It squealed and banged in protest. Instead of the wizened, murmur of maturity, the bed threw a bitter old geezer’s tantrum. It sounded like a construction site.

“What’s all that banging?” asked the old man, sitting at the bar, nursing a beer.

“Well that’s exactly what it is,” replied the bartender. “Banging. In the bedroom just above us.”

“Well I can tell it’s banging. You doing some remodeling? Sounds like someone’s building something.”

“Yeah someone’s building alright. Building towards a climax by the sound of it.”

The old guy gave the bartender a questioning look.

With an upward roll of the eyes as if motioning to the room above, the bartender said impatiently, “They’re having a bounce. They’re rolling in the hay, only we don’t keep hay up there. They’re screwing!”

The old boy chuckled as he looked wistfully down into his beer as if it were a crystal ball taking him back to his youth.