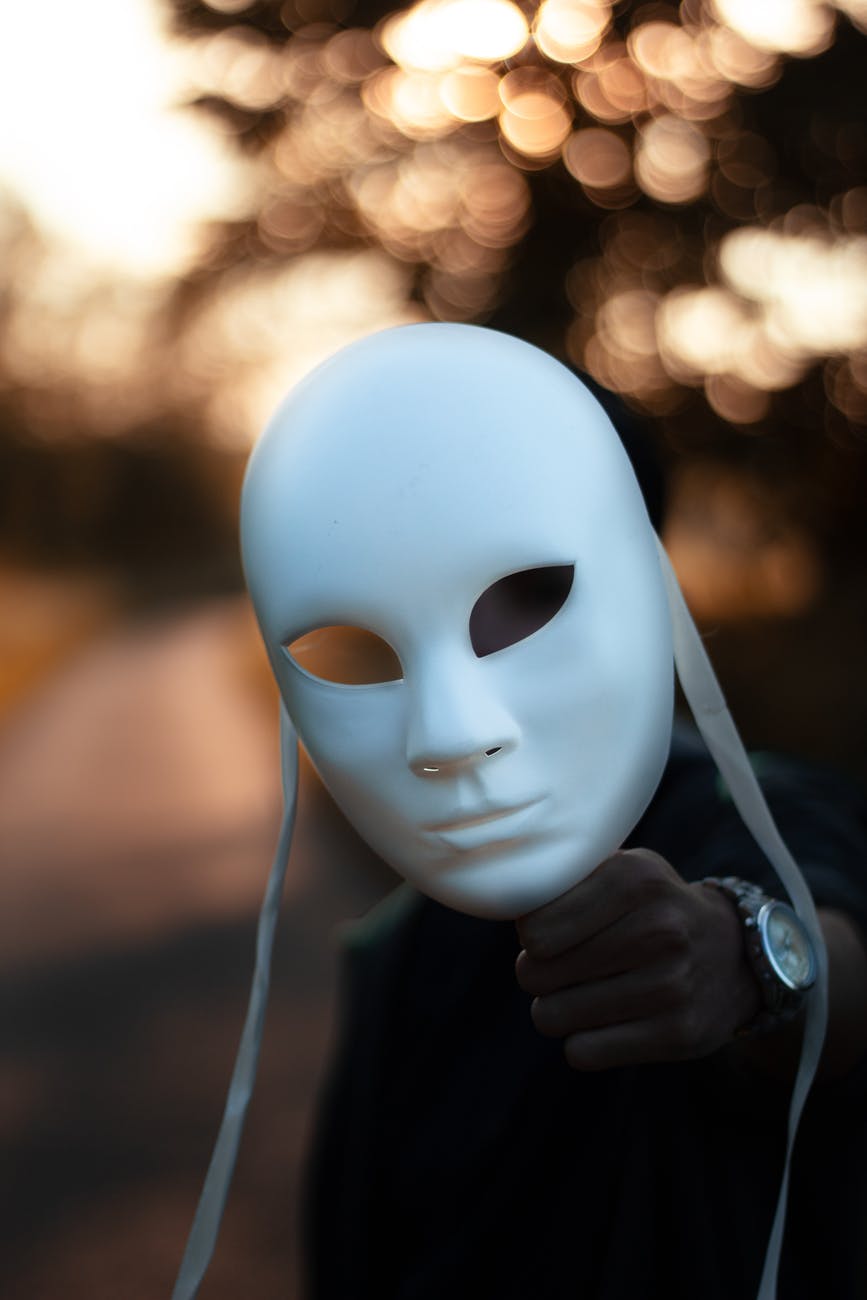 Late Friday afternoon and the week was winding down. Do COVID era weeks really wind up? Today it’s the day to day to day, Drudge. Monotony. Colorless repetition.

CNN’s Erin Burnett was interviewing a couple of the big giant medical heads who’ve held sway on damn near every aspect of our daily lives. That’s not necessarily a bad thing given our situation. I put it this way because I think that we’d all like to return to the days when the big giant medical heads fade back into the relative obscurity of research and writing articles in medical journals that everyday people never read.

Cora and I were only half listening to Dr. William Haseltine a regular big giant medical head on CNN. And then he started in on masks and for some reason this caught our attention. Haseltine in the now familiar pedagogic, voice from on high of big giant medical heads suggested (paraphrasing here), “We need to start thinking about wearing two masks and a face shield.”

The dogs know the “f” bomb. Chloe the eldest walks back up stairs and Lexi quietly heads into the back of her crate. On this particular afternoon Lexi wasn’t exactly certain what to do. It was raining “f” bombs. This was the full out squadron of B-52s; an indiscriminate carpet bombing of “f” bombs. Thermonuclear “f” bombs. Lexi’s head was on a swivel.

At about the point that I said something about “these guys” not being able to locate their behinds (not the word I used) with both hands, daughter Jessica came down to check the laundry. At least that was the excuse. She probably wanted to know just what all the brouhaha was about.

I told her about the two masks and a shield and railed, “the shit keeps changing.”
“I know,” she said. “We’re basically on our own.”

I turned to Cora who, after the first wave of B-52s had passed over, had probably tuned me out.
“Two masks and a face shield? Why stop there? Why not three masks and a shield? Howabout three “f’ing” masks, two face shields, and a partridge in an “f’ing” pear tree. Let’s throw in Bernie’s mittens while we’re at it.”
I suggested that maybe the obnoxious, Trump sycophant, Congressman Matt Gaetz, was a man ahead of his time, a veritable medical pioneer, when he facetiously wore a gas mask into the Halls of Congress a year ago.

Just for the sake of clarity, anyone who’s followed my site knows that I’m all in on masks and face coverings. I get angry at the “masks violate my Constitutional rights” crowd and have taken my life into my hands by admonishing perfect strangers to wear their masks in the local Lucky Store.

My problem isn’t so much the masks. It’s the messaging – or more accurately, the mixed messaging.

On Monday of last week, Doctor Fauci, the biggest of the big giant medical heads, said on The Today Show that double masking, “just makes common sense that it likely would be more effective.”

Two days later on CNN, Fauci, reversed course saying that we should follow CDC guidance which doesn’t call for double masking. On the same CNN town hall CDC Director Rochelle Walensky discouraged using N-95s, the so-called gold standard, not because they’re rare but because they can be uncomfortable.

And then two days later there was Haseltine and his two masks and a shield.

The whole mask/face covering thing has been mystifying for, well, just about a year now.

It’s almost nostalgic to think back to Doctor Fauci emphatically advising people not to wear masks. I remember indignantly looking at masked people and mentally tsk-tsking them for not following the rules.

And then the big giant medical heads abruptly said, “OMG, we have to wear masks.”

When the big giant medical heads were called out for this 180 degree course change they claimed that it was because they didn’t want to create a run on N-95s as they were required for healthcare workers.

Even at the time I called BS on that. My feeling then and now is that the big giant medical heads were using that rationale as an ass covering excuse for giving wrong information. They could have advised people to use anything other than N-95s, a sort of anything is better than nothing. Besides, back then finding an N-95, along with TP and hand sanitizer, was like randomly picking up the winning Powerball ticket.

Ever since those early days the advice has changed more than I change my socks. Gaiters and bandanas were frowned on at first, rated as the least effective of face coverings. A short while later gaiters were upgraded on the efficacy scale and bandanas were deemed sufficient if they were folded over (I don’t know how else you could wear one without it fitting like a bib).

A few weeks ago on one of the Bay Area radio stations, a local expert, I guess you’d call him a small medical head, suggested that if you’re outside running and moving around in swirling air a mask is more or less an option; etiquette more than anything.

Some time before that another small medical head on the same radio station warned that the hazardous period of exposure to COVID is understood as 15 minutes and that it could be a cumulative thing. In other words if you get exposed one day for 5 minutes, a second day for 7 minutes and a third for 3 minutes then you’ve reached that danger zone of 15 minutes. His conclusion was mask up, all the time.

The point of all of this is, as my daughter suggested, “We’re on our own.”

Wouldn’t it be helpful if the biggest of the big giant medical heads would put their big giant heads together, come up with some hard and fast rules and release those from up high? Through the CDC maybe? That’s what they’re doing, right?

Sure, until they aren’t, such as what happened last week with Fauci’s two step and Haseltine’s two masks and a shield. Throw in Sanjay Gupta, Leana Wen and Oscar the Grouch on the CNN Kid’s Town Hall and it’s dizzying.

Of course there are always going to be the radiologists and proctologists and some guy named Eddy looking for their few minutes of fame on YouTube by saying that the whole thing was made up by aliens from space so that they can take over the world without firing a death ray.

It’s been difficult enough to get some people to use masks at all, especially in states like South Dakota, where the governor takes the laissez faire, people should use their best judgment (because people ALWAYS use good judgment and NEVER text and drive) attitude. Two masks and a shield are going to have them storming the battlements with torches and pitchforks.

At this point the only thing that we’re sure of is that we aren’t sure. And this isn’t true of just masks. We’re not sure about sending kids to school, or letting them participate in sports. We’re not sure what constitutes outdoor dining.

And who is supposed to enforce all of this? In the same town of Pinole where I actually got a ticket for doing 27 in a 25 mile zone, the overzealous minions of the law are oblivious to the apparent fudging on what’s outdoor and what isn’t. And who, including the business owners, knows if three walled tents are a violation of the law? And are they laws, guidelines or just the result of someone pulling some wild idea out of his….ear?

For a year now it’s been clown car confusion which has probably fueled some of the anti-regulation rhetoric. After all if the experts, the big giant medical heads, keep changing their minds then why bother?

Since I haven’t done a COVID Chronicle for some time, here are some odds and ends.
As expected, the rich, the famous and the connected are pushing aside the old folks and buying or lying their way into a ticket on the vaccination train. Soul Cycle instructor Stacey Griffin who is apparently the royalty of Soul Cycle instructors got a vaccination by claiming to be an “educator.” When called out she of course apologized with the standard boilerplate language, “truly sorry;” “error in judgment.” At least she didn’t use the ever popular, “if I offended anyone.”

Before getting my first vaccination my doctor warned me about the side effects she’d had with the Moderna vaccine – almost enough to give me pause. In the end I had a sore shoulder for two days, less than with my flu shot.

I recently took a COVID test and the protocol now skips the throat swab and goes straight to the nose. The result came back in just over 24 hours – negative.

I’m back to vacation planning. Anything requiring air travel is off the itinerary. I’m thinking about a trip to Death Valley National Park in April when the wild flowers are in bloom. Camping would be great but Cora’s over it with camping.

Depression comes and goes. I’m going on a news diet because news is feeding hopelessness. I feel like I’m watching the years that I have left slip away. To that end I’m blowing off any surgery on either of my torn rotator cuffs. As with everyone else in the world I’ve lost a year with COVID, I don’t want to lose 6 months of time recovering from shoulder surgery. I’ll go with discomfort and a cortisone shot every now and then, if needed. The shoulder specialist is in agreement.

Finally, I want to clarify the purpose of my COVID and other news related pieces. A commenter recently seemed to call me out, in a roundabout way, for focusing on my own feelings. That’s fine. Comments, pro or con are a good thing. It’s discussion. To be clear though, writing about my own feelings is the purpose. This is meant to be a journal. This will all go on a flash drive for some great-great-grandchild to read and understand what the COVID era was about (the same goes for my political posts). Anything other than my feelings would just be rehashing the nightly news.

Meanwhile I’ve figured out my solution for the masking dilemma.

Photo by Mike on Pexels.com

16 thoughts on “THE COVID CHRONICLES: Masquerade”