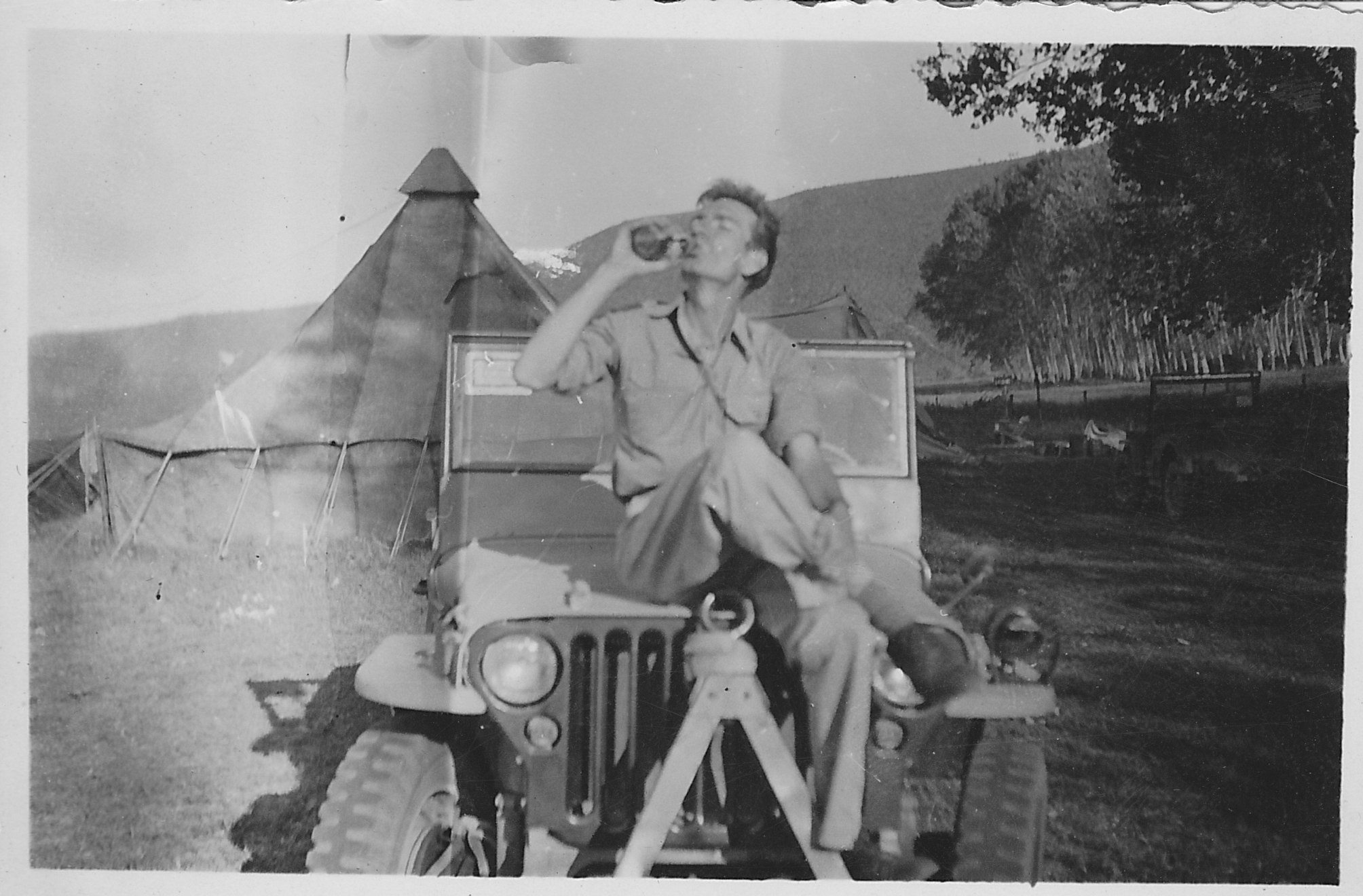 Banner photo. Dad having a cold one. North Africa? Italy?

Hey dad. When you were a youth, did you ever wonder what kind of father you might be? You were at loose ends during most of your twenties. Did you even entertain the prospect of fatherhood?

You had a lot of time to run those thoughts around in your head. You were 36 when I was born. Mom was 30.

You couldn’t have realized it at the time, but when I was born you’d already lived nearly half your life, the final few years tormented by dementia. Knowing you, hell knowing anybody with a thimbleful of reason, if you’d been aware of what was coming down your street you’d have likely figured out a way to check out early, before the demon came a knockin’. I know I would’ve.

You came from Toole, Utah, a mining town that would’ve rested in the shadow of Salt Lake City, except that when you were born, in 1917, there wasn’t enough of Salt Lake City to cast a shadow.

By your late twenties, Salt Lake City was the biggest thing you’d ever seen and the furthest you’d been from Toole was Coeur d’alene, Idaho, where you did a stint with the Civilian Conservation Corps.

That all changed in 1944, when you joined the millions of men who shipped out, either west to the Pacific, or east to Europe to fight the last of the “good wars.”

Your wartime journey took you through Chicago, New York, London, North Africa, and the boot of Italy. The war was winding down in Rome when you arrived and met your future bride. I can only imagine your wide eyed culture shock.

It seems implausible, a young man, green as grass, from a desert mining town hooking up with a Roman girl.

There were times, many times, when the two of you seemed mismatched. It strikes me that maybe you met at a time in your lives when you saw yourselves without prospects and just settled.

You and mom never did talk much about your early years, the pre-me times.

There isn’t much history beyond old photos in tattered scrapbooks and the few tales you told. And nobody’s left to fill in the blanks. .

There is the tale of the cat’s tail. Seems that mom had a cat and you didn’t know enough about that species to realize that you don’t fuck around with its tail. And so when the time came to put the cat in a carrier you fucked around with its tail used that appendage as a handle – or tried to. “Like picking up a buzz saw,” is how you described it.

When Nonna Maria, your future mother-in-law, served calamari you mistook it for a helping of big spiders.

Just a green young man from a desert town.

In the end you got your CO’s permission to marry the Roman girl, and then spent some extra time in Rome, before taking the big ship back to the states and then home to Salt Lake City.

If it was culture shock for a small town guy to find himself in Rome, what must it have been for a young lady from Catholic Rome to find herself in Mormon Salt Lake.

Then you delivered her from the frying pan straight to the fire by moving to Bluefield, West Virginia, where she ran afoul of the neighbors for violating the “blue law” of doing laundry on a Sunday, the Lord’s Day.

In 1956 you had your career breakout and landed a job at San Francisco International Airport as a radio operator. We moved to the Bay Area where we remained. Where I remain – happily.

I don’t know much about my parents’ life before I was born. They never talked about it much and I didn’t ask. Sitting here at the kitchen table, staring blankly out at a sunrise that’s turning the brown hills golden, I can only wonder about the missing pieces. Times like this, I wish I’d been more inquisitive.

Eighteen years ago, journalist Tim Russert wrote Big Russ and Me, 352 pages chronicling his relationship with his father while growing up in a working class, Irish neighborhood in Buffalo, New York. One of those stories, almost trite, about the hard nosed, gruff, but always fair, father.

My father wasn’t at all gruff, though he was more than fair. When I read books like Big Russ and Me I sometimes wonder if I missed something when I was growing up.

Could I write 352 pages about my relationship with my father?

That’s not a commentary on my father as father. More of me as writer.

Straightforward. Introverted. Introspective. Principled to a fault. Most people described him as easy going. Meat and potatoes. Fisherman. Didn’t go to college, don’t know if he finished high school. Picked up a calculus book and taught himself. Voracious reader, especially the classics. Lover of classical music, and The Three Stooges, and hater of modern music and John Wayne. A journalist and then an engineering writer.

Damn he loved Italy. Returned often, yet never learned to speak a lick of Italian. Before dementia consumed him I put him on a plane back to Rome to visit mom’s family. Given his condition it might have been against my better judgment. After I’d put him on the plane it wouldn’t have surprised me if he’d have called to tell me he was lost somewhere in Mongolia.

Know what influenced me the most?  His politics and views on religion. Okay, maybe the writing thing too.

Dad was a liberal, at times describing himself as Socialist.

Atheist to the core with a particular disdain for the Mormons.

He did a short stint as an op-ed writer for a newspaper, The Kaysville (Utah) Weekly Reflex and in one particular column took on the Latter Day Saints over the controversial opening of a local liquor store.

In that piece, which oozed sarcasm, dad wrote, ”The words whiskey, gin, rum and even vodka are all in the dictionary. You can either tear out the offensive pages and burn them or destroy the entire book.” He ended his column, “Well kids, keep up the valiant crusade. I’m going to the ice box and if nobody is looking I’ll mix myself another (cocktail).”

Gotta hand it to the old man. He had the balls to throw shade at the LDS in small town Utah in the late 1940s.

Mom was a practicing Catholic and won the early battles, dragging me to church and sending me to catechism, essentially fucking up my Wednesday afternoons, Saturday and Sunday mornings and every Christmas Eve. Christmas Eve, when I had to don itchy woolen pants at midnight and listen to a preacher wag his high-handed gums, when, by all rights visions of sugar plums should’ve been dancing in my head.

Dad eventually won the war, albeit posthumously, when I converted to his religion, which is general disdain and distrust.

Dad was never the stereotypical sports dad and he never taught me the so-called manly arts of carpentry and auto repair. What he did leave me with I value more than the ability to manufacture a cabinet.

I’m a liberal (often describing myself as Socialist), atheist, voracious reader, who likes rock and appreciates classical. I love the classics. I majored in history because I barely passed algebra let alone the calculus that dad mastered. The Three Stooges make my gut hurt with laughter and I think John Wayne was an overrated, racist fuck, and as the reader can tell, I’m a writer who isn’t afraid to offend on occasion.

And if I need a cabinet, I’ll go out and buy one.

So while I might not be able to sing 352 pages of praises for dad, it doesn’t mean he’s not worthy of the song.

“In life there are no do-overs.” I stumbled on that quote about eight years ago. Stumbled and fell. And it left a mark.

Sally Friedman, a columnist for the Burlington County (New Jersey) Times, took that quote a bit farther in one of her columns, writing, “But by the time you reach my stage of life, there are no do-overs. Just plenty of regrets. On sleepless nights they line up like soldiers in the field of battle, demanding attention.”

Sally’s a lucky woman. Her regrets are soldiers. Mine are jackals; barking, howling, snarling jackals.

Sally regrets the times that she didn’t have time, the instances when she put off her kid’s childhood curiosities, writing, “To my discredit, I almost always put the ringing of a phone ahead of the ringing of a child’s voice asking one of those imponderables.”

I wish that it was that simple for me.

It took until my kids were out of college to realize that it was self composed bunk. It was through some soul-searching and the words of my own family that I came to realize that I was far from the father that I should’ve been.

That’s not an easy thing to own up to.

I’m not exactly sure when things went south and none of this is to say I didn’t do some of the right things.

So what do you do?

You cringe and wince and try to beat back the nighttime jackals. You take the bitter medicine of recall and try to do your best moving forward.

Sometimes, when my daughter gets frustrated by her mom, Jessica will come to me to talk it out and ask me to perform some shuttle diplomacy. I was overwhelmed when my son asked me to a 49er game this past season.

I can never completely make amends, at least in my own mind. Just do better and try to be a better father to my nearly middle aged children and a good grandfather to their children, which I think, I hope, I’ve been.

But hey, wanna write 352 pages of good words about a good father? Want to meet someone who lives up to the schmaltz of those cloying Father’s Day cards?

Go visit my son, Matthew. It’s almost like he took my example, and then channeled the good and tossed the remainder.

He’s mastered the delicate and demanding art of benign fatherhood. In his tool box are patience, reason, kindness, diplomacy and tact. He uses his tools like the craftsman that he is.

We aren’t doing Father’s Day this year. My daughter took her son to play in a basketball tournament in Los Angeles and I asked Cora to tell our daughter in law not to worry about visiting. Their social calendar has them flitting all over hell’s half acre every weekend. It’s just as well that Matthew gets a chance to put up his feet and enjoy his family the way dads are supposed to on Father’s Day.

Given the history, Father’s Day and the syrupy cards I receive can make me wince. There were times when I felt that a day in my honor wasn’t deserved, but my family never failed to give me their love and appreciation that I know was genuine.

When all’s said and done, and regardless of how I view myself as a father I will always know the fulfillment of being my father’s son and watching my son as father.

22 thoughts on “Father And Son”