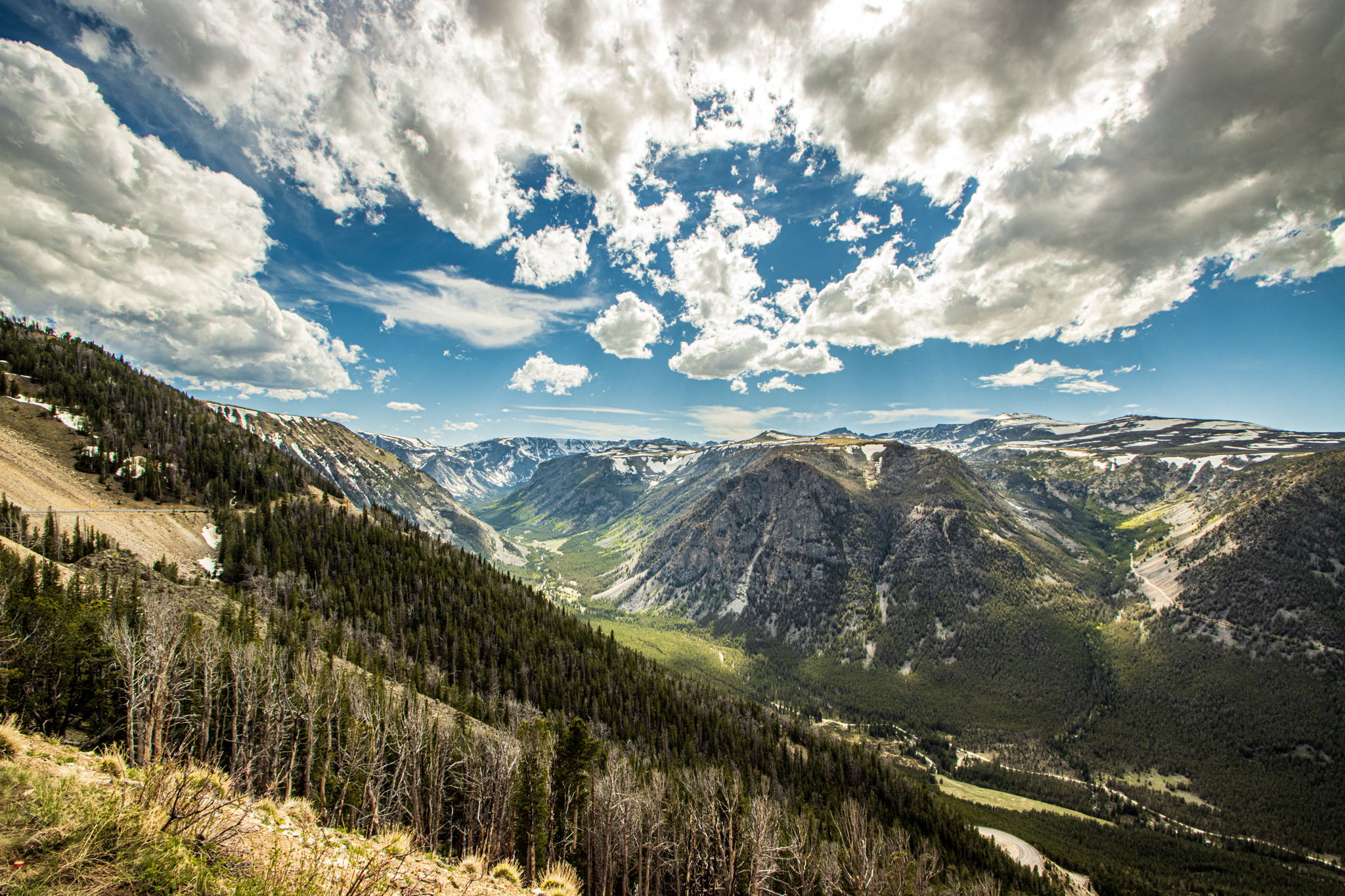 The Red Lodge, Montana area attracts hunters, fishermen, hikers and campers, but my single purpose was to drive the Beartooth Scenic Highway. Sixty five miles long, starting at Red Lodge, the Beartooth snakes up the Beartooth Mountains to an elevation of just under 11,000 feet before dropping down into the twin towns Cooke City and Silver Gate, and the northeast entrance to Yellowstone National Park.

We took Highway 212 southwest out of Red Lodge. Along the course of Rock Creek you could legitimately call the Beartooth a highway.

It’s a gentle rise, almost a false flat until 10 miles into the drive, where the rise turns into a steep twisting climb. From 10 miles on, the term “highway” is a generous figure of speech as the Beartooth becomes a two lane road of harrowing switchbacks and hairpins. You don’t do highway speed here unless you yearn to take in the view from the unique perspective of a brief freefall before the hard landing in the canyon below.

On occasion I would glance up and see the roofs of cars weaving in smooth tempo, back and forth, along the switchbacks, growing smaller as they made their way up the flank of the mountain, ever more tiny until they disappeared. Sign posts in the distance above looked like twigs.

Cora tries to avoid heights if at all possible and when avoidance isn’t possible she turns to renouncing them. On the drive up or down notoriously steep Filbert Street in San Francisco, she looks down at her feet as she mumbles a few prayers to all the saints – and likely a few sinners – because you gotta hedge your bet. While I enjoy the view of the horizon from a glass elevator she reads the advertisements on the wall.

At about 8000 feet, I pulled over at a turnout and stepped to the edge. It was here that I had to coax Cora to take in the view. Reluctantly she got out of the car and fear gave in to amazement and awe.

We looked down on the Lilliputian scene in the canyon far below; highway 212 where we had just been driving, now in miniature, carried toy cars along the course of Rock Creek, now a silver thread, glistening in the mid-morning sun. We looked straight across at a snow topped façade of granite peaks and cliffs.

The Rock Creek Vista Point, at 9700 feet is the first major pullout from Red Lodge. Here we could stretch our legs, use the restroom, stroll the area and take in the view looking out in three directions. On one side is Hellroaring Plateau and on the other is Rock Creek Canyon and the range of mountains and cliffs rising on the other side of the canyon. From here we could clearly see the ancient glacier’s footprint where it had carved out the canyon.

Below: At the Rock Creek Vista Point, trees battle with the rocky ground.

We continued up the switchbacks to the 10,947 foot summit where skiers were enjoying their winter sport under summer skies.

Fifteen hundred feet down the other side of the summit we stopped at the Top of the World Resort for lunch and a break. A cramped little general store sells food, fishing gear, sundries, guide books, basic supplies for lodgers and campers and of course souvenirs, mostly t-shirts, bumper stickers and refrigerator magnets that are meant to prove, without a doubt, to the infidels back home that you indeed drove the Beartooth Highway.

We took turns going into the store. Cora foraged in the store while I watched Lexi dig furiously in the snow. She went at it with purpose as if digging for gold – or dog treats. Cora came out of the store none too happy, carrying in her hand a sad looking premade sandwich. After inspection I decided that I would pass and take my chances at the bottom of the mountain in Cooke City.

As my Uncle Al used to say, “When you’re ma calls you oughta go, when nature calls you gotta go.”

To that end, every now and then a man would look furtively back and forth, sneak out of line, disappear into the woods and return wearing a satisfied smile.

And, as my Uncle Al used to say, “And some damn fool said that Coke is the pause that refreshes.”

I kept an eye on Cora. She’s not above hunting for a likely clump of bushes or a sufficiently wide tree.

Just outside the little outhouse was a box for donations to help cover the costs of maintaining the toilet. Judging by the squalid condition of the cranny it appeared that there were significantly more deposits in the pit than in the donation box.

Cooke City is the first community down the mountain, and it was brimming with tourists headed into or out of Yellowstone, which is just five miles further down the hill. Parking was no better here than it would’ve been on a summer Sunday afternoon at Fisherman’s Wharf in San Francisco.

I found parking just down the road in Silver Gate but the eateries were jammed inside and out. COVID? What COVID?

All I wanted was a sandwich, a little bag of chips and a soda to take to a picnic table in Yellowstone.

I found a promising little deli, but maybe should’ve taken it as a warning that there was no line and few customers, while it was standing room only at every other eatery in Silver Gate. No matter, I was hungry enough to fight a Yellowstone bear for trash can scraps.

The young man behind the counter who took my order for a roast beef sandwich was clearly a newbie. He swung his head back and forth in cadence with the instructions he got from an older couple who must have been the proprietors. First one told him to do this and then the other told him to do that.

It was an old school place that harkened to the old time deli days when the deli guy never washed his hands or wore gloves. And I’m okay with that – I guess. I survived, apparently with no long term effects, those bygone days of a deli minion handling dirty bills, wiping his hands on his apron or doing a little deep mining for an annoying booger.

While the young man crafted, for lack of a better word, my sandwich, I went to the register to pay. The lady proprietor hustled to the register, holding a dinner plate sized cookie in her hand. No place to lay the cookie? Well, that’s what armpits are for and so she jammed the cookie snugly in the left pit for safe keeping while she took my money. That done she dashed the cookie off to a couple eating at one of the tables. The couple apparently hadn’t noticed the arm pit offense as they tore right into the cookie. Probably thought it was nice of her to warm the cookie for them before serving it.

The sandwich was little better than the one Cora bought at the Top of the World Resort but it filled the gaps and satisfied while Cora and I sat at a picnic table at the edge of Yellowstone’s Lamar Valley. We stayed for a while and watched the wolf spotters scan the far reaches of the valley with their oversized scopes.

No wolves while we were there but the spotter nearest our table sighted some bighorn sheep in the distant hills. He and his family were traveling in an RV that looked to be just a couple feet shy of a Greyhound bus. I couldn’t imagine that rig going over the Beartooth.

They were over the moon excited about the bighorns that must’ve been a mile or more distant. I didn’t have the heart to tell them that a week prior, while in the Badlands, I’d been within about 20 yards of a small group of bighorns and had watched one clamber up the side of a cliff.

It’s claimed that the Beartooth drive can take as little as three hours and I suppose that’s true if one grips the wheel, stays riveted to the road, never falling to the temptation of a sidelong glance or, god forbid, a stop at a turnout. But to what end? That would be like going to a Tahitian beach and not even dipping your toes; hiring a chauffeur to drive you in your Ferrari or going to Peter Luger’s Steakhouse and ordering a salad.

The drive took up nearly the entire day. Too tired to cook, Cora had leftover pasta from the previous night and I had pretzels and beer.

Below: Images from the Beartooth Highway

Alpine tundra in the Beartooths.

Below: The bear’s tooth

16 thoughts on “Touching The Sky at the Beartooth”