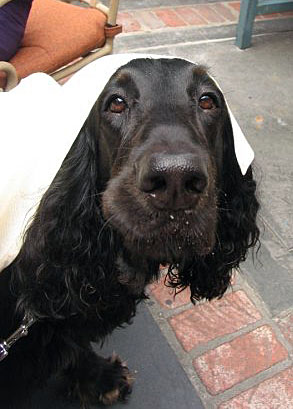 It’s 2020. This week marks four years since we put our Rainey to sleep. I wrote this four years ago. This is the second of a series of posts from a now defunct blog. I started the series in July of that year as it seemed that we were on the verge of losing our girl. I published this on July 27th. When I wrote this I felt that the end was coming but I didn’t know that it would be less than a month. Still there was hope.
I revive the series every now and then. I was relatively new to blogging then. The original left something to be desired in some ways and this posting includes some edits. While the words and punctuation, the nuts and bolts so to speak may have been changed, the story and the lingering heartache remain.

Dogs have given us their absolute all. We are the center of their universe. We are the focus of their love and faith and trust. ~ Roger Caras

She’s trying gamely to walk around the house, albeit awkwardly with the pink bandage on her lower front leg. She’s eating again. She hobbles over to the couch and hits me with her nose, her way of saying, “Hey old man get me some head scratching.” There’s no moping in a crate, or raising a painful paw in supplication. It’s starting to feel like I have my dog back.

She’s alert again – pissed off when someone has the effrontery to ring the bell on HER door. She goes back near the open kitchen window to stick her nose up. The nose twitches discerning everything that her day blind eyes can’t. I feel like I have my dog, my best friend, back again.

She’s not totally whole yet. She struggles to get to her feet because that one paw is still weak and doesn’t give her the leverage to lift her up. It’s certainly still sore but she isn’t afraid to put some pressure on it. The stairs are supposed to be off limits but Rainey saw an opportunity when the gate was left down and she bolted up and went to one of her favorite sleeping haunts.

The other night she asked to go out on the back patio. So the two of us sat quietly in the warmth of a summer evening. She stuck her nose up and looked into the dark fields beyond the wire fence. Something out there, a deer or a coyote, irritated her and she barked into the darkness. I’m getting my dog back.

Peeking from under the table at a restaurant. Any scraps yet?

Like the cynic said, “Every silver lining has a punch in the gut.”- or something like that. Yesterday morning I received a call from the veterinary oncologist. “I’m afraid that we found cancer in the foot and it’s spread to the leg and the lymph node.”

You know, it works the same way with dogs as it does with people when that dreadful word is uttered. We know that in this house because we’ve heard that word four separate times now. Four times Cora has faced down cancer. When the word is spoken every word that follows is just white noise. You hear it and it’s as if you’ve lost consciousness for a few minutes. I heard squamous something, something. The doctor droned and I stared and then just sort of snapped back into consciousness and asked for options.
“The most aggressive treatment would be to amputate the leg and then give her chemotherapy. It would extend her life by about 6 months.” He went on to explain the dog years thing but in my mind I’d already rejected the option out of hand. I have a blind dog that would have to go through another surgery and then recovery and then learn how to maneuver in her own personal darkness with 3 legs on a hardwood floor.
“The next option is chemo. This will add about 3 months” I’d already talked to another vet about chemo and she told me that she was usually dead set against it. “Dogs get sick from chemo just like people, but unlike people they don’t understand that it’s for their own good. They just know that they feel sick”
The last option is to do nothing and let things take their course – 6 weeks. The math of option two suddenly didn’t look too good. Chemo would actually only buy us an extra 12 weeks. And so we have to recognize just whose benefit we are serving and make a decision based on love. Three months of feeling shitty and not understanding why?

Tomorrow we have another appointment for Rainey’s bandage to get changed. Unless she tells us something compelling in favor of options one or two we’re going to be asking the hard questions of what we need to do in order to keep Rainey comfortable and if the time comes, to be able to realize that we have to ease our friend’s pain. Cora shakes her head and blurts “no.”

There’s a special bond between Cora and Rainey. Cora works for the Clif Bar company, one of those progressive companies that among it’s progressive perks allows employees to bring dogs to work.

Rainey was our second dog. Our first, Phantom, had spent many days alone while the kids were at school and Cora and I at work. A couple of years after we lost Phantom, Cora started pining for another dog. I agreed but the one non-negotiable caveat was that the dog would not spend her days alone at the house. Cora would have to take her to work.

So every day Rainey went to work, curled up by Cora’s chair and watched the other Clif Bar employees and basked in the attention and the treats. There were three walks a day, morning, noon and afternoon through the Berkeley streets.

We’re coming to a crossroads. Quickly. And the decision weighs on me every minute.

I’m devastated by this. Still there’s times when I’ve asked myself if there is something wrong in being so melancholy over a dog. I told a co-worker and she said that I have every reason and right to feel the way I do. “She’s been a family member for over 10 years.”

This all brings to mind an essay that I’d read some years back, written by a woman who reflected on the passing of her dog. She wondered why the dog’s passing affected her more than that of her mother. She went on to reason that she and her dog never had sharp words; never exchanged angry looks; never held grudges. It was a boundless love by each other, for each other. Boundless love. No hard feelings. Who else but a dog gets upbraided, sulks for a while and then walks slowly over, tail barely wagging and looks at you as if to ask. “Are you okay now?”

Just after I’d graduated college a lot of hard looks and equally hard words had passed between my mom and I. While we were never really estranged we were certainly strained. With the birth or our son the relationship between mom and I improved some but it never became whole again.

A few years later mom passed away suddenly. Dad, already on the brink of dementia, called me up at my home in South San Francisco in the middle of the night on May 2nd. I raced down an empty highway 101 and when I arrived, mom was being loaded, alive but unconscious onto an ambulance. She passed the next day on her birthday. There were no goodbyes.

Dad was a wreck and it was left to me to make all the arrangements for a funeral and to take care of all the subsequent legal hurdles. I remained emotionless during all the arrangements; negotiating with the priest, the funeral home, the cemetery and all the other funerary functionarlies while playing host to the sudden influx of relatives. Powering through on adrenaline I guess. When it was all done and the last drink had been drunk I finally broke down.

To this day I don’t know if that flood of emotion was from the loss or the exhaustion. And so in some way I understand what the woman meant in her essay about the crushing sorrow that comes with the loss of a dog. It took me a good twenty years before I visited my mom’s grave and offered an apology and tried to make amends.

When they’re puppies and young adults we don’t look 10 years down the road. They run with limitless energy. They twist and shimmy and jump when we come home from work. They chase balls and sticks and Frisbees with a contagious joy and exuberance that channels into our gladdened hearts. Inevitably they get old. They get sick or they get lame. In their last days we return their love in huge bunches; we feed them by hand or move our sleeping quarters downstairs when they can no longer manage getting upstairs. We help them to stand and ease them down at bedtime. And then we’re faced with that most painful of boundless love when we’re forced to say the last goodbye.