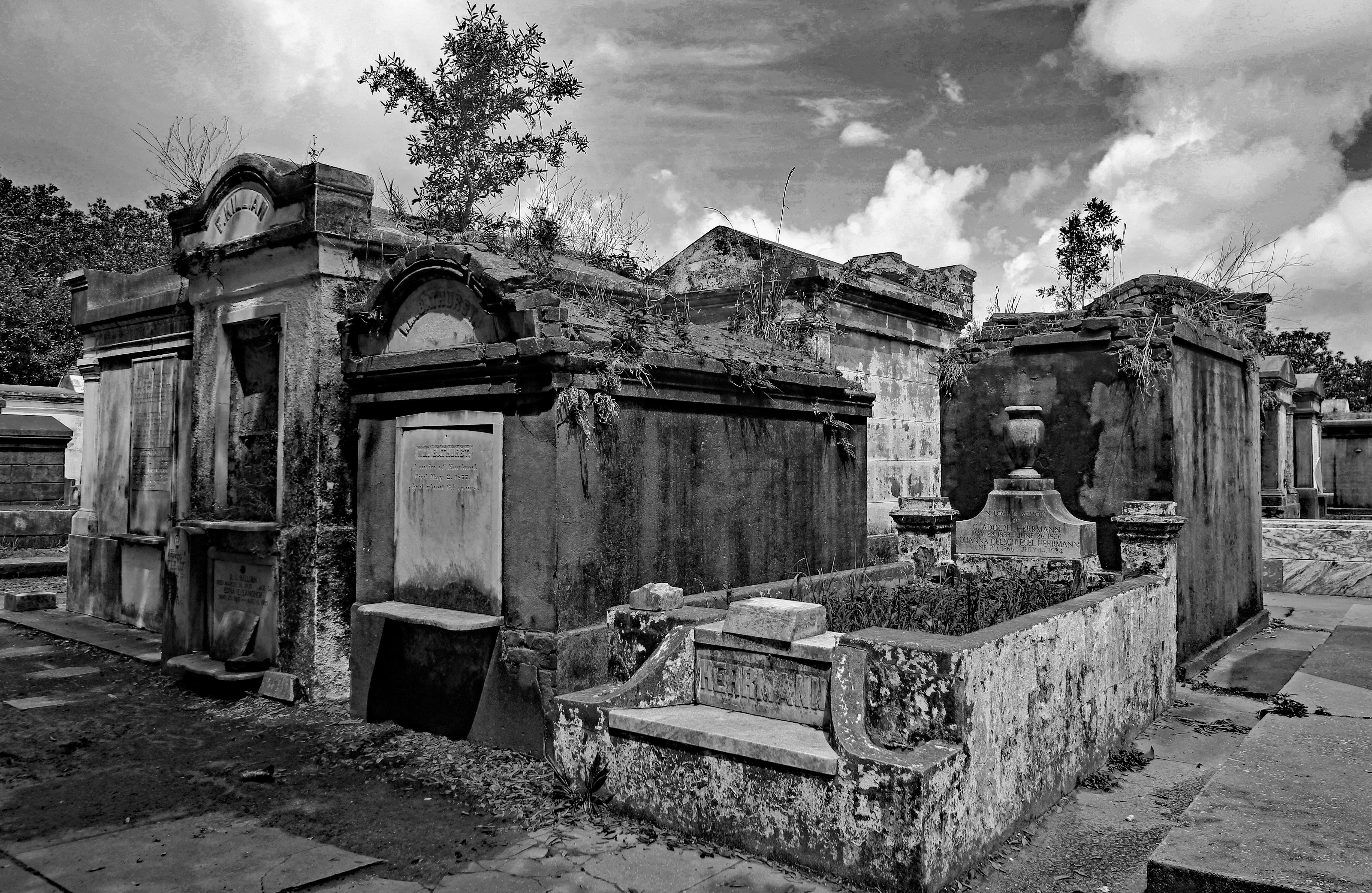 The shaggy rocker Rod Stewart told us in song that “every picture tells a story.” There are a myriad of stories to be found in Lafayette Cemetery but the pictures only tell a part of the story, just enough to wet the appetite. So, unlike the last post about Lafayette Cemetery which was mostly photos, we’re going to throw in a little taste of history and a travel tip or two.

The Family Tomb of A. Brown

In the midst of a concrete gray city of the dead, its the green of The Family Tomb of A. Brown (below) that grabs your attention.  But taking in the whole, coaxes out the other colors in the scene; dark green trees, light green weeds breaking through the pavement, the occasional fern, the blue of the sky, and even the browns and coppers of dead leaves. And then you look at the angle, a solitary colored tomb at the corner of two long lanes of gray. I thought this corner view lent itself perfectly to a wide angle shot (10 mm).

The Family Tomb of John Scheu

At first glance there’s really nothing in the photo below that distinguishes it. Every now and then I go through some of the thousands of photos I’ve taken and originally did nothing with and look to see if I’d missed something. A couple of years after our visit I came across this photo and wondered, why did I take this? And then I saw the dates of birth and death. Clearly during the mid – 19th century the Scheu family was ravaged. George died at 3 months; Catherine lived to see only her third birthday and Jacob passed away at 7 days.

Pictures are just a quick reveal of the whole story. I looked up some details of the green Family Tomb of A. Brown (top photo in this post) and found that a marker on the side of the structure tells a similar story to that of the Scheu family.

What might have caused so many deaths at such a young age? Granted, child mortality was much higher in the 19th century but there was one other contributing factor to the high mortality among the young (and those of all ages) in New Orleans – yellow fever.  Between 1817 and 1905, New Orleans was ravaged by yellow fever; a marauding reaper that snatched 41.000 lives. While I found no evidence that yellow fever took the lives of the Scheus and Browns it isn’t out of the realm of possibility. In 1858, when the Brown girls perished yellow jack as it was called took 4845 lives.

In a rather dark and gloomy section of the cemetery with a cracking brick wall to its rear sits the grave site of T. Sweeney, who was born in 1873 and died in 1910. His given name was Theodore and on the day we visited his site the stone urns flanking his grave site were lit with the colors of bright bouquets.

The disrepair of the wall and the gloomy location lent itself to some edits.

Above – Removing the color enhances the gloomy features while below a simulation of cross processing gives the scene a ghostly blue aura.

Time and Nature will eventually have their way

Below – The ferns and weeds infiltrating a grave site gives the eerie impression of nature repossessing the grounds that man can only borrow.

Daniel Haberstich was born in Switzerland in 1810. He is interred with his wife Anastasia who emigrated from Alsace. A walk through Lafayette Cemetery reveals that New Orleans was indeed a city of immigrants. Many of the names reflect an influx of Germans, Irish and Italians.

Below – Some of the departed are only remembered by the remnants of a cross and a mention of being someone’s “Darling sister.”

Society for the Relief of Destitute Orphan Boys

The one single monument that touched us the most was the one erected for the Society for the Relief of Destitute Orphan Boys.  The society was established in 1824 and given the epidemics that plagued the area it probably did a sadly thriving business. During the 19th century the society took in only white Protestant boys.  The organization still survives today as an integrated institution known as the Waldo Burton Memorial Home. Occasionally a visitor will leave a toy on the little shelf at the front of the tomb where the cross sits.  Usable toys are collected by members and brought to the home.

I had an aunt and uncle who planned many of their vacations around their favorite hobby – golf. Their travel plans usually included some research into the local golf links and their luggage almost always included their clubs. When I was a kid I found that strange. You go on vacation to see and do things, not play golf, I thought.  Enter photography, my hobby and I gained some understanding of my aunt and uncle.

When Cora and I visited Lafayette Cemetery I went there primarily with a photographic goal in mind.  Not that its a bad thing but in my overriding zeal for selecting the ideal shots I neglected the fascinating history and the fact that these monuments represent real lives and real stories. I came away with what I thought were some good shots but I left behind an understanding of the place and the stories behind those photos.

What did I miss? I missed the Koenig Tomb, which was never used but has been left open allowing visitors to see the inside of one of these structures.  I didn’t recognize the famous Jefferson Fire Company No. 22 Tomb nor did I see the resting place of Judge John Howard Ferguson, the judge in the famous Plessy versus Ferguson case that eventually made its way to the Supreme Court, establishing the concept of separate but equal. I didn’t realize the impact of a nearly century long epidemic of yellow fever. I’m a history buff yet I didn’t take the care to recognize the many epitaphs that commemorate the Civil War dead residing there, many of them describing the place where they perished.

Did you know that the Vampire Lestat has his home in Lafayette Cemetery #1?  Well, he doesn’t really, but the Karstendiek Tomb served as the inspiration for Lestat’s tomb in the film An Interview with the Vampire.

Part of the point of all of this is that it is well worth either hiring a good guide or doing some extensive research in advance of your visit here.  These sites are a view into the history and society of a fascinating time and place in America. From the photographer’s point of view by all means take advantage of this singular opportunity but take the time to understand what you’re shooting so that you can later compliment your photos with the stories behind them. Its a lesson that I hope I’ve learned.

Above – A row of tombs in photographed in their natural color.  Below – Edited later into a spectral monochrome to give it a ghostly feel.

6 thoughts on “Nola’s Cities of the Dead Part II”