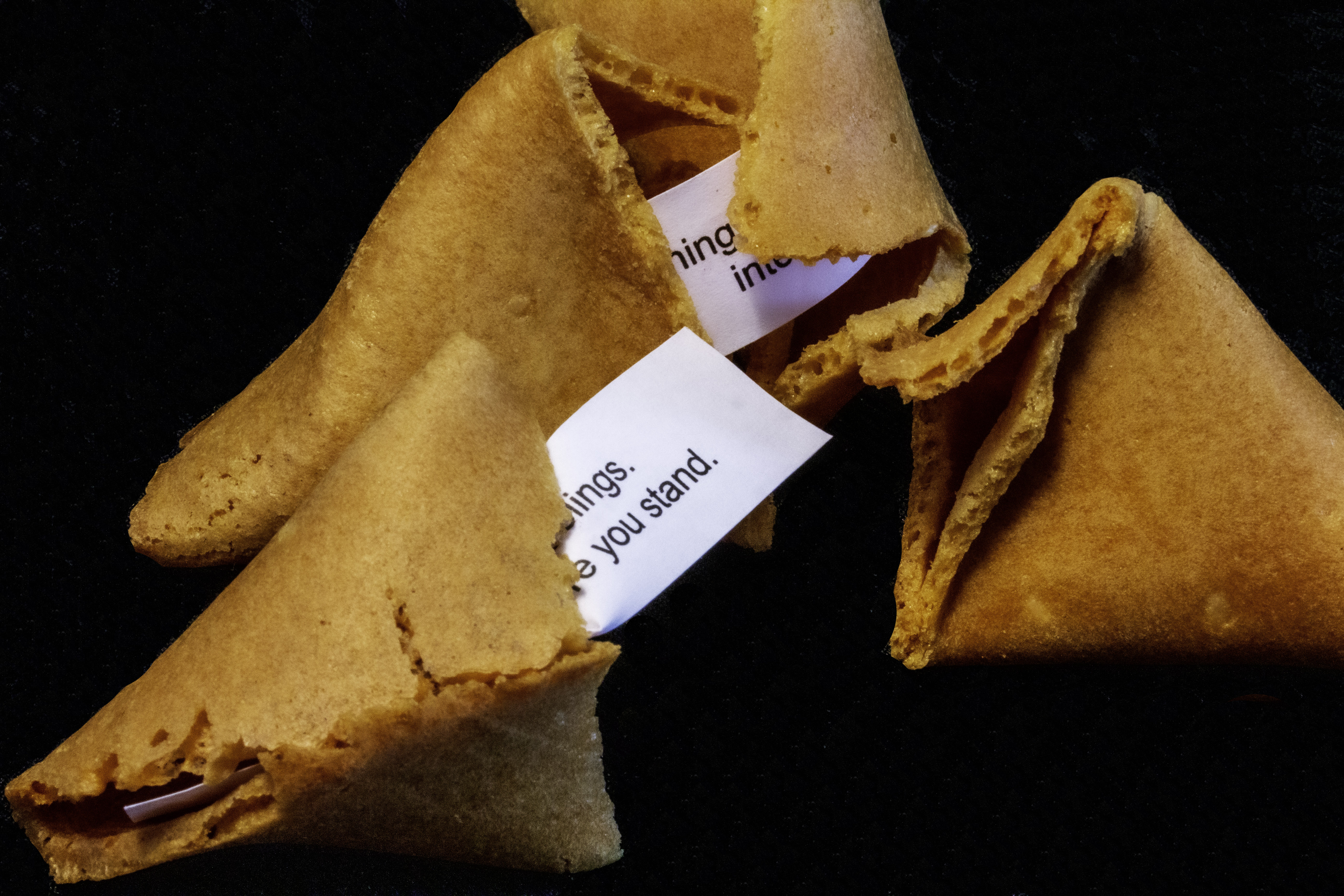 February wanes; the Year of the Rat is done. A foul rodent of a year, leering through sharp filthy teeth has passed and given way to the ox. In ordinary healthy times San Francisco’s Chinatown would now be winding down from the February festivities. February is when Chinatown typically dresses up in it’s finest, brightest gold and red.

Chinatown in February has always, whether in lean times or flush, been a cultural feast. It teases the senses. The brilliant red of the ubiquitous lucky money envelopes, the multi-colored dragons and lion dancers and the big parade itself, a brilliant canvas of colors and joyful faces.

The popping of thousands of firecrackers; the beating drums and the clanging cymbals and gongs that accompany the gyrating lion dancers. Leave the acrid odor of spent firecrackers on the street and enter the aroma of a banquet room of New Years’ delights. The crunch and pleasing warmth of a freshly fried spring roll. And the tastes; the sweetness of rice cakes; juicy tang of a tangerine; a savory slice of roasted chicken or a whole steamed fish blessed with ginger and soy.

February is a time when the Asian community looks forward to prosperity and good fortune. This COVID year, prosperity and good fortune have been hard to come by. The Year of the Rat delivered a trio of curses; the virus itself, economic hardship and a spate of violence incited by a former president and his acolytes; a malevolent group searching for someone to blame, found Asians to be a target of opportunity.

Despite it all the community has been resilient. It’s pulled together to do what little was possible, while doing as much as it could to observe the changing of the Zodiac.

Anyone who has read this blog and my posts on Chinatown knows my affection for The City’s cultural jewel. It’s a place of memories that reach back to my childhood.

Readers of this blog also know that I usually stay away from kitsch laden, touristy Grant Avenue. I prefer to keep to the streets, the alleys and the shops where the community and culture are alive and authentic.

Early in February I took a Sunday walk up Grant Avenue, curious to see what COVID has wrought. On a Sunday during the run up to the Lunar New Year parade, one should expect to weave in and out of a nine block long stream of foot traffic; to join a crowd gathered to watch a troupe of lion dancers or to see people hopping comically away from a string of exploding firecrackers.

Below, Chinatown in the pre-COVID times.

I expected a sparse crowd. What I saw at eleven in the morning was less than sparse. At times you could look up the sidewalk and not see a soul. Grant Avenue itself, usually packed with bumper to bumper cars, was clear of traffic.

A normally busy Grant Ave. sidewalk is solitary on a late Sunday morning.

For years I’ve walked up Grant Avenue and paid little attention to the shops themselves. The window displays of rosewood Buddhas, Chinese themed chess sets, costume jewelry, tea sets and t-shirts emblazoned with dragons long ago became trite and uninteresting.

And so on this late Sunday morning I must’ve walked two or three blocks before turning to look at the stores themselves. It registered

Little remains of what I’d long recalled and often ignored. The storefronts once bright and gaudy almost to the point of hurting the eyes are dark. Many of the stores are confined behind steel gates or concealed behind the cold, gray slats of roll up doors. The Buddhas, the chess sets, the costume jewelry and the tea sets that I’d sneered at for decades are gone. Almost an entire block between California and Pine Streets is shuttered. I was stunned, saddened and wishing that everything I’d made fun of could be back in all it’s garish glory.

A row of shuttered buildings on a late Sunday morning

Some of the idle shops are offered for lease. Others, well, even the building owners are giving up, having put up signs offering their properties for sale.

The venerable Eastern Bakery limps along. On any given day the shop itself would be packed with customers, shoulder to shoulder eyeing goodies in the brimming display cases and pointing out their selections to the busy staff. It would be a cacophony of commerce in Chinese and English.

On this day a sampling of the store’s baked goods are laid out on a table that barricades the doorway. Paper signs, hand scrawled with Sharpies offer pork buns, cookies and moon cakes. There is no cacophony, only a woman’s lone voice quietly hawking, “Pork buns for sale.” On what was once a plum location on Grant Avenue, the 97 year old bakery, the oldest in Chinatown, is sitting in an economic death valley.

The Eastern Bakery sits on the corner of Grant and Commercial. As I crossed Commercial I turned to see one of Chinatown’s many murals. I’ve seen the mural a number of times but on this particular morning I took note of the lady and the dragon. Their expressions struck me as somehow appropriate.  The lady seems strong, proud and stoic; the dragon angry and defiant.

Over near the corner of Washington Street, Li Po is all locked up with no foreseeable future. Li Po, the classic dive has served cocktails to tourists and locals for over 80 years. In an episode of the Layover, Anthony Bourdain sucked up Li Po’s famous Mai Tais before wobbling off to get a burger and a beer a few blocks away in North Beach; it was a classic Bourdain bender. I’d always wanted to go to Li Po even before Bourdain boosted its already landmark status. I have to add Li Po to my bucket list – assuming Li Po doesn’t kick the business bucket.

Li Po opened in 1937. It’s been nearly a year since the venerable old lounge has served a cocktail.

Half block away the Buddha Lounge, dark, narrow and as no frills as a dive could be is also padlocked. I’ve occasionally nursed a drink or three, bellied to the bar of the 68 year old saloon. Five bucks could get you a beer and some friendly conversation with the bartender.

Ironic humor. A statue of a Chinese warrior – properly masked.

Many of the restaurants hang by a thread. It seems that the physical layout of Chinatown with its narrow one way streets presents logistical problems for outdoor dining. Many of the restaurants would normally serve large families gathered at big round tables, set in an expansive dining room; impossible for a sidewalk to accommodate. The City has allowed a few street parking spots to be closed off and partitioned for outdoor seating but these little alcoves can only accommodate a fraction of what a restaurant dining room could hold.

I left Grant Avenue. I know that the days will come when those closed shops will reopen. They have to. Isn’t that part of the normalcy that we’ve been longing for?  Now they’re empty, like bodies whose spirits have left them. With better times those now empty bodies will receive new spirits and all the color will return to Chinatown.

February’s waning. A few day till March and I’ve returned for a quick visit. On the eastern fringe of Chinatown, on Clay Street I stop at Sam Wo, a tiny restaurant with a big local history. Sam Wo has been serving Cantonese food to locals and tourists for a century. But for the essential staff needed to keep the place afloat, Sam Wo is empty. There’s a line outside; well, it’s a line if you consider three customers to be a line. The line would be much longer in normal times. “Normal times;” it’s the phrase that’s become maddeningly overused during the past year. The phrase is long past being threadbare.

It’s one customer inside at a time. One lone employee stands behind a table located just inside the doorway. He’s there to take orders and hand out bags of food. He conducts business around a clear partition that divides man from public.

During the good days and bright busy nights, when the barrooms closed at two, the hungry after-bar crowd headed for the noodle shops. Sam Wo was one of THE places in Chinatown if you were looking to soak up the alcohol or ward off the impending headache with a late night/early morning snack.  Snack is an understatement unless you consider a platter heaped with chow mein to be a little nosh. On Friday and Saturday nights Sam Wo stayed open until three or until the last contented customer filed out.

With the bars shut down, the late night noodle joints are as dark and empty as the lonely streets.

I hadn’t been to Sam Wo in 45 years. Back then it was still on Washington, across the street and a few doors down from Ross Alley. At the old Sam Wo you inched through the single door, then past the kitchen and upstairs to the small dining room; small means really small – capacity about 50.

Forty five years later standing under the old 1930s sign that hawks Chow Mein – Noodles – Soups – Fish – Salad, I consider getting an order of beef chow fun to go. I could sit and eat across the street at Portsmouth Square where the locals, mostly older Chinese, meet to sit in the sun and chat. I think about it for a moment longer and then blow it off.

Forty five years ago beef chow fun was my Sam Wo go to. Looking up at the sign, a song that I’d heard on my drive into The City, Gary Moore’s Parisienne Walkways, keeps playing in my head; a sound track to old memories, four decades old.
“And I’ll recall that you were mine”, go the words.
I feel a surge of melancholy that chow fun in a Styrofoam box could only make worse.