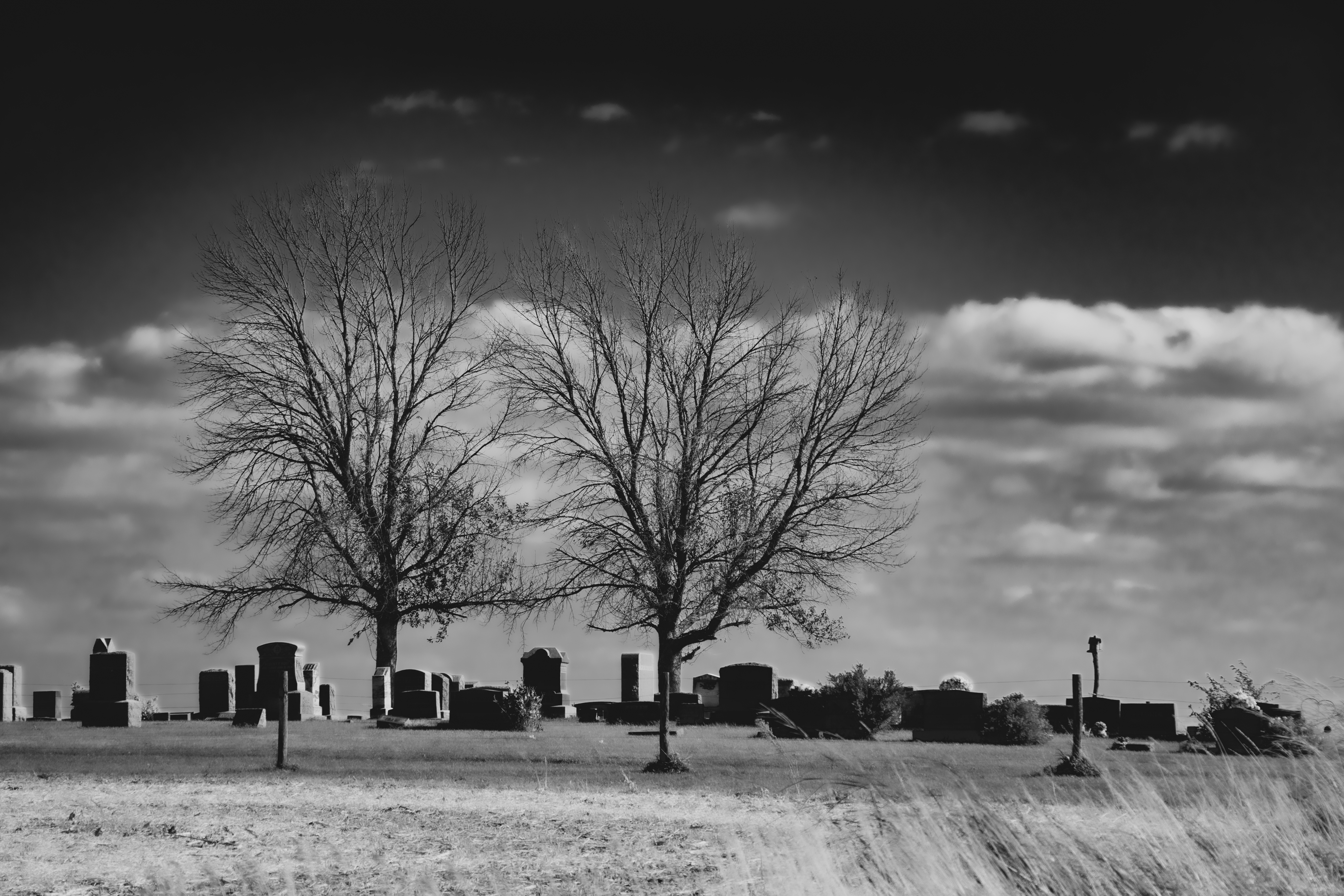 I almost never visit a cemetery, but I can’t pass up a forsaken, decaying old graveyard or boneyard.

What’s the difference you ask? Three different words that all seemingly mean the same thing.

Merriam-Webster defines them all succinctly as “a burial ground.” That’s far too simple. A graveyard can be a cemetery, but a cemetery cannot, unless through the work of time and vandals, be a graveyard.

West of here in Richmond, just up the interstate, there’s a cemetery called Rolling Hills, and it’s just as the name describes; rolling, grassy hills, so green and well manicured that it could be a golf course (that is if you flatten it out, take away all the gravestones and add a fancy bar). The gravestones and burial sites are neat and well maintained and it’s run under a boilerplate of do’s and don’ts that read like some sort of eternal homeowner’s association. Unless you’re there to pay a former someone a visit it’s a rather bland, depressing place – charnel white bread.

Off to the east, in Benicia, is a graveyard, the Benicia City Cemetery (because no community actually names its final resting place a graveyard). Like many final resting places whether it’s a cemetery, or a boneyard or “boot hill,” the Benicia City Cemetery sits on high ground, with a pleasant view of the Carquinez Straits, the waterway which connects the San Francisco Bay and the Sacramento River.

Except for a small new section that has groomed lawns, the Benicia Cemetery is rolling hills of dirt, littered with weeds and debris from trees. Old gravestones, some cracked, some toppled, some half buried and others just crumbled piles of stone. That’s a graveyard.

A boneyard? You probably have to resort to a Stephen King novel to find a boneyard.

I usually stumble on graveyards during a road trip.

I was in Madison County, Iowa when I spotted a sign for Young Cemetery. The sign pointed up a short single lane side road. I took the road and parked. It was more cemetery than graveyard so I didn’t stay long. On my way back towards the main road I looked in the rear view mirror and saw a haunting scene; wispy, wind blown grasses, two bare, stark trees and the silhouettes of headstones. I suppose that from a distance and under the right conditions, Young Cemetery can pass as a graveyard.

Graveyards reveal history and tell stories. They define the people who came before us, waves of immigrants, where they came from, why they came and when they arrived.

James Scanlon rests on a slope at the Benicia City Cemetery. He hailed from County Sligo, Ireland, and is in the company of other immigrants who arrived from Ireland. There’s a story here that tells a tale of two countries.

In the mid-nineteenth century millions of Irish left their motherland for America, at the time, a land of opportunity, in order to escape the Potato Famine. By 1852, when the scourge ended, the Great Famine had killed roughly one million people from starvation and related causes.

James and those he rests beside helped to build America and make it the melting pot of cultures, a merging that succeeded despite the bigoted efforts of narrow minded Americans.

Graveyards detail what their residents did in life and how they lived.

Graveyards are anthologies, each gravestone a story. There are bad people and good souls and lives well lived.

Jackson, located in the midst of California’s Gold Rush Country, sprouted during the boom days of the 1849 Gold Rush.

Buried in the funerary album, are epitaphs of tragedy.

In 1850, gold was found near Jackson, by two freed slaves. In 1893 the mine was purchased by the Argonaut Mining Company. The Argonaut would become one of the richest mines in California history, yielding $25 million in gold before World War II.

In August of 1922 a fire broke out, deep in the mine – 3,500 feet deep. Forty-eight miners, all immigrants, were trapped and died of asphyxiation. It took rescue workers two weeks to reach the level containing the doomed miners.

All of the victims were buried in local cemeteries, including the one at Jackson, where a section is dedicated to some of the miners who perished in the 1922 disaster. Included is Charles Fitzgerald, who was father to a seven year old boy and a five year old girl. A month after the disaster, Fitzgerald’s thirty year old widow tried to kill herself by taking poison.

A twisting drive along a maze of Indiana farm roads, mostly single lane, many of them dusty, brings me to the Arabia Cemetery. Opposite the graveyard is a farm. I squeeze past a pickup truck, one of those behemoths that are common out here. A guy who I figure is the owner of the farm is sitting in the truck. He eyes me as I wedge my car into a parking spot near the entrance to the graveyard. It’s not even a parking spot, just a little pocket of a turnout. The man in the truck has me feeling a little nervous but when I get out of the car, he gives me a wave and drives off.

The graveyard itself is up on a hillock, peaceful, far from the noise of the living, breathing world.

Arabia is like most of the old graveyards I’ve visited. Old headstones, some tilting, with most in varying states of decay. Nearly all of the gravestones are what I’m used to seeing; crosses, obelisks, and simple slabs.

And then there’s the marker for Ethel Lee Lawrence, who died at the too young age of 31. The headstone has the appearance of a tree trunk, chopped close to the ground. It’s called a “tree stone,” and while it’s uncommon, I’ve already seen some in other old graveyards in Indiana. “Tree stones” held some popularity from the late 19th century through to the early 1900s, and symbolize life cut short. Ethel Lawrence’s grave marker is different from most gravestones in that it’s hollow, rather than solid like a traditional stone. Her stone is made of clay pipe.

Ethel’s family history tells of husband Horace, described as “a drunkard and a rent jumper,” who earned his living at a factory that made clay sewer pipes (hence the headstone made of clay pipe). Horace moonlighted as something of a janitor at a local saloon which apparently paid some of his wages in liquor.

Ethel, known as “a very happy and religious person” who “whistled and sang church hymns all the time at her work of cooking, sewing, washing, scrubbing, and ironing,” was mother to a 14-year-old daughter, three younger brothers and a two-year-old sister.

In the autumn of 1918, Ethel, with child, was taken by the Spanish Flu, which was decimating the world during that period. It fell on the fourteen year old daughter to raise the family.

There are some bona fides required of an honest to god graveyard. Like the forgotten old man who will soon reside in his eternal bed, a graveyard has to be old and lonely and show a certain amount of neglect.

South Valley Cemetery sits off I-94 just south of little Osseo, Wisconsin. But for a simple wooden sign that caught the very most corner of my eye, I wouldn’t have known it was there. I took a U-turn to stop and visit. South Valley is a lonely dormitory, overgrown with weeds. Just to the rear is a pile of old tires and to its right, a little farm house. If there’s a caretaker, he’s no more mindful of the grounds than are its residents.

If there’s a ghostly quality then so much the better. Silver Terrace, in Virginia City, Nevada sits at the edge of a desert. Most of the trees are skeletons of what they once were, and tumble weeds roll about the ground to the whims of the desert wind, until they lodge against an old tombstone. Weeds, dry and contorted, with roots that reach down into the very bones, choke weather beaten markers.

A gnarled tree at Silver Terrace.

Weeds lodge between a toppled stone and a memorial for the “Beloved children of Richard and Nora Stack”. The marker was placed by the children’s aunt. What of the parents? How old were the children?

I’ve published the photo below on a few occasions. It was taken on a bright day. Editing to black and white turned the photo into a full moon night. This is a new edit in which I darkened the sky and softened the texture to try and make it more ethereal.