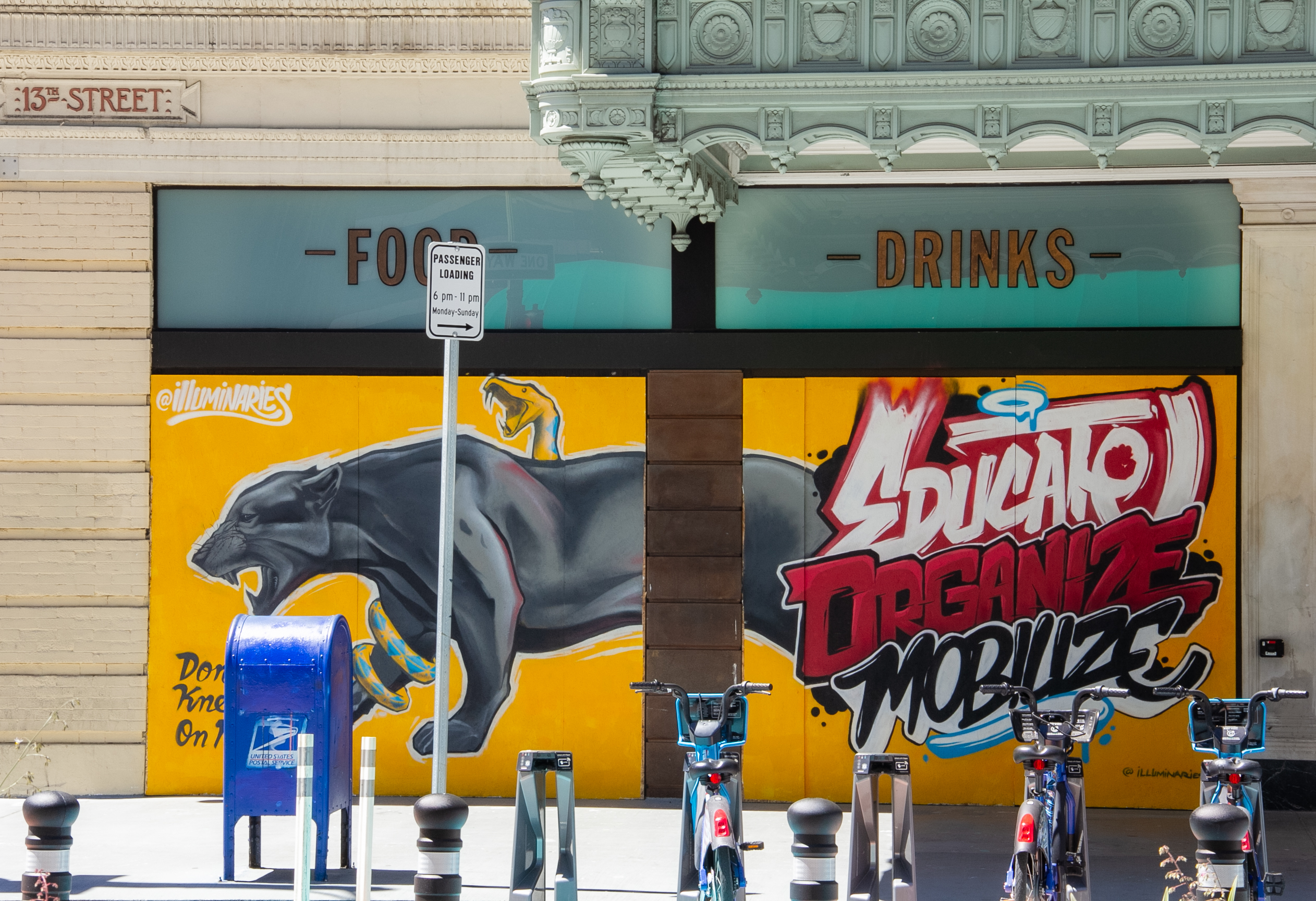 For days following the killing of George Floyd, the city of Oakland was in flames, if not literally then figuratively. Peaceful protests turned into confrontation which turned into violence leaving the city littered with tear gas canisters, rubber bullets and broken glass. As calm returned and peaceful protest prevailed, the city took a moment, a moment to catch its breath, to begin to clean up and to speak out in a loud and stunning artistic voice for justice.

Many of Oakland’s downtown businesses put up sheets of plywood to cover smashed windows or to prevent any possible damage during future demonstrations. As a part of the cleanup, as a part of taking that deep breath, artists saw an opportunity to turn sheets of wood into canvases on which to paint works of art honoring those who have died due to racial injustice and to honor the Black Lives Matter movement.

Some are very simple works while others are brilliant, vivid works that take your breath away.  The message changes from storefront to storefront taking your emotions along for the ride. At one panel your heart aches, while the very next burns with anger.

A simple red heart speaks of love and further on a snarling panther bodes of uprising and change.

“George Floyd’s pleas awakened this world that has been rendered comatose by fear of contagion and all of a sudden nothing mattered but justice.” ~ Aysha Taryam

“People don’t have any mercy. They tear you limb from limb, in the name of love. Then, when you’re dead, when they’ve killed you by what they made you go through, they say you didn’t have any character. They weep big, bitter tears—not for you. For themselves, because they’ve lost their toy.”  ~ James Baldwin

“I love blackness, it is STUNNING, MAJESTIC, INSPIRING but it is also not here to serve non black people when it suits them via sports, music, hairstyles, entertainment etc, it should be respected in the workplace and shouldn’t be ignored when it’s crying out in fear of being killed.⁣”  ~  Clara Amfo

“If the American Negro, the American black man, is going to become a free person in this country, the people of this country have to give up something. If they don’t give it up, it will be taken from them.” ~ James Baldwin

“For us, #BlackLivesMatter is really a re-humanization project. It’s a way for us to love each other again, to love ourselves, and to project that love into the world so that we can transform it.” ~ Alicia Garza

“There comes a time when silence is betrayal.” ~ Martin Luther King

Not all of the art was planned and carefully sketched.  Some was done during the heat of protest but has been part of a decades long blueprint drafted over years of injustice. And some is the boil over of three long years of frustration and division.

As Oakland repairs itself and the plywood comes down the art will come down with it. The paintings are fleeting but the message is enduring and will never cease until justice and equality reign.  Hopefully this street art will find a home in a museum.

Leave a Reply to Yeah, Another Blogger Cancel reply