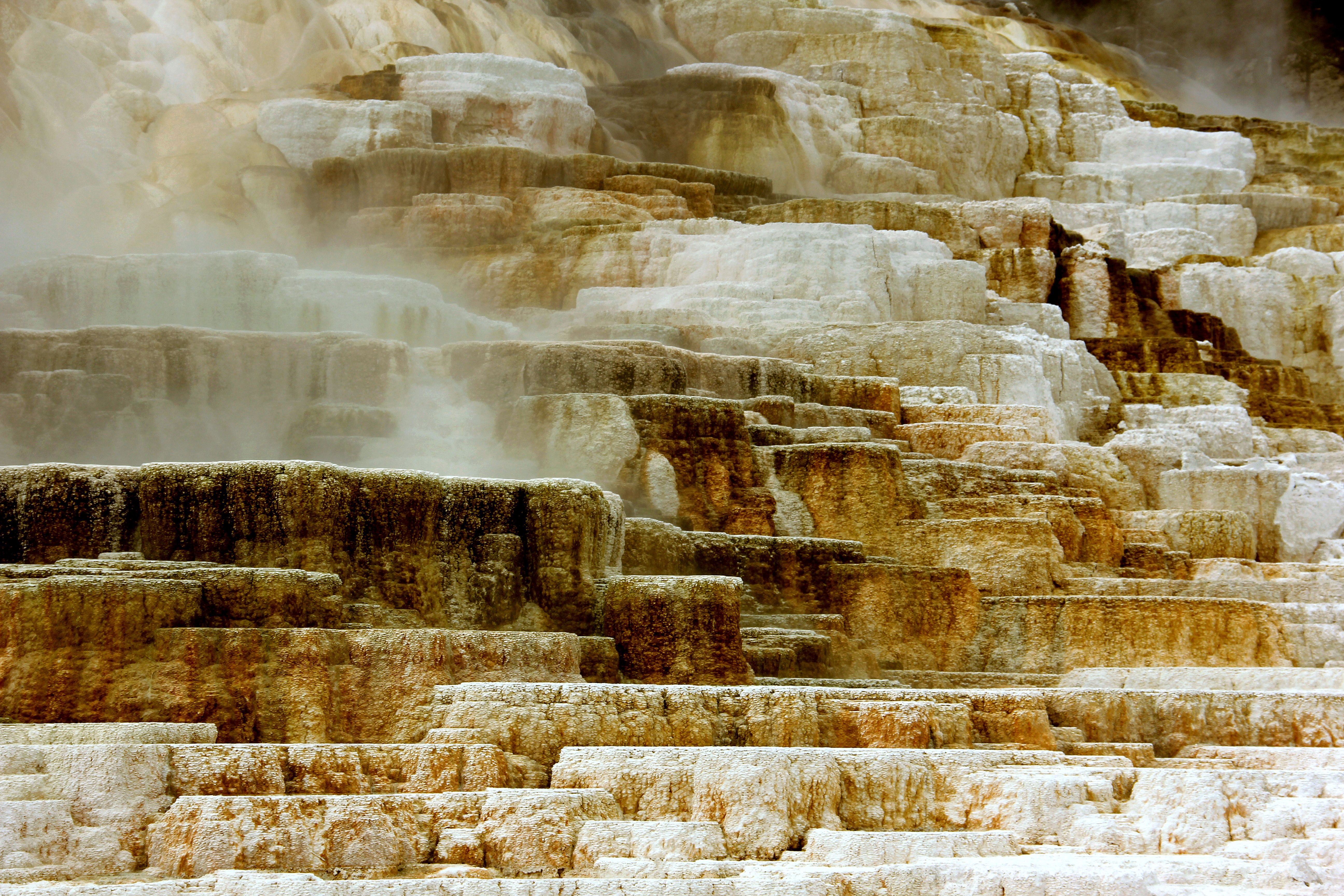 This week Friday Fotos is a final photo tribute to Yellowstone.

One of my favorite places in Yellowstone, one that I remembered from childhood trips and looked forward to showing Cora is Mammoth Hot Springs. Located on a limestone hill, Mammoth is a complex of terraces made up of crystalized calcium carbonate deposited by hot water bubbling up from Yellowstone Park’s vast underground plumbing system.

It’s been described as a cave turned inside out. I describe it as a scene from some unknown planet.  It’s a beautiful surreal place where steam rises from terraces colored in white, gray, tan, charcoal and cream.

Steam creates a haze over the otherworldly terraces of Mammoth.

The top of a dead tree peeking above the Mammoth flow is testament to the hot springs’ hostile environment.

The Norris Geyser Basin is one of the hottest and most toxic of Yellowstone Park’s many thermal areas.  Norris sits at a temperature that tops 200 degrees F. (93.33 C.) and a highly acidic low pH level of around 2.  To me one of the more fascinating sites at Norris is the stand of dead trees surrounding Cistern Spring.

Below, a monochrome edit of the photo above could be a scene out of World War I.

The remnants of trees that succumbed to Yellowstone Park’s deadly waters.

What looks like a waterfall is actually a flow of water from the crater of the now dormant Excelsior geyser at the Midway Geyser Basin, a place which Rudyard Kipling once described as “Hell’s Half Acre.” The crater measures out at 276 x 328 feet and dumps 199 degree (F) water into the Firehole River at a rate of 4000 gallons per minute.  During it’s active period in the 19th century Excelsior’s spectacular eruptions would reach a a height of 300 feet. In 1985, Excelsior erupted to a height of 55 feet, an eruption that lasted for two days. It last erupted in 1988.

Above and below, views of the boiling waters of Excelsior geyser dumping into the Firehole River. The brilliant colors are thermophiles, microbe communities which thrive in the hostile environment of Yellowstone Park’s thermal areas. Standing on the opposing bank you hear the roar of steam and rushing water.

As we left Yellowstone from the east, headed for Cody, Wyoming I felt a profound sadness. I could visit any major city in the world, be enchanted for a bit and then stick it into the far regions of memory. Yellowstone for me is different. It’s a place of childhood memories, of fishing the Yellowstone River, of picnics interrupted by bears and of introducing my wife to a natural wonder; a place that I might never visit again.